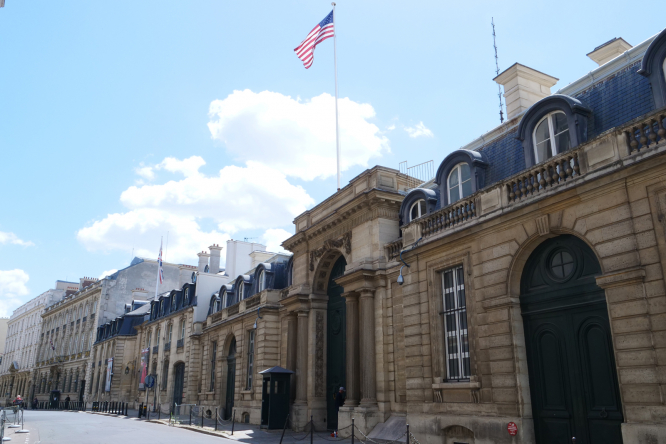 'While we await the arrival of the ambassador, we continue to engage our French friends on all levels, and that includes President Biden’s engagement with President Macron' says Brian Aggeler, chargé d’affaires in Paris Pic: Vernerie Yann / Shutterstock

Each time a new American president is elected, a range of political appointments must be made – and President Joe Biden must fill about 4,000 positions.

A new ambassador to France and Monaco is one of the key roles.

The US Embassy in Paris has been without the head of its diplomatic corps since Jamie McCourt left as ambassador with Mr Biden’s inauguration nine months ago.

That does not mean US citizens and US interests have been unprotected.

Brian Aggeler, the chargé d’affaires overseeing the embassy administration until the new ambassador arrives, said they have a 1,500-strong team in France and they are more than capable of doing the job.

President Biden has nominated the former US ambassador to Belgium, Denise Campbell Bauer, for the position. As former executive director of Women for Biden, she was key in mobilising support for him in the 2020 elections. However, she is unlikely to be confirmed soon.

Mr Aggeler said the appointment process means the nomination has to be agreed by a majority vote in the US Senate, which can take months.

'There’s quite a backlog, which has nothing to do with, in most cases, the nominees themselves'

"They are simply not getting to them as quickly as we might hope,” he said.

Nevertheless, he and embassy staff are preparing for the new ambassador’s arrival. “We’re really looking forward to welcoming Denise Campbell Bauer and supporting her. An ambassador plays such an important role.

“One strength that certainly our ambassadors to France have consistently had is that they have a personal relationship with the US president, which gives them an extra level of credibility when they are engaging with French counterparts at the highest level, including President Macron.

“They can speak with authority about the White House’s priorities.

“That’s probably one of the key things but, as you know, there are a whole wide variety of responsibilities that involve public representation, engagement with civil society and all the other folks with whom they have to interact with here in France.

“I would think the nomination of Denise Campbell Bauer would indicate a relationship that would be very useful, going forward.”

Out of 57 ambassador nominations, only two have so far been confirmed: to Mexico and the UN. In comparison, by mid-August, Barack Obama had 59 ambassadors confirmed, George W. Bush had 53, and Donald Trump had 19.

Kathryn Dunn Tenpas, who tracks presidential appointees for the Brookings Institution, told the Wamu university radio site that the delay “has to be affecting our diplomatic relations across the globe”.

White House press secretary Jen Psaki has said that Mr Biden sent over more nominations to the Senate than Mr Obama or Mr Bush had at the same point. Mr Aggeler said:“The Senate has a lot of things on their plate and when the nominations come through, what else is going on at the time could affect when they get to dealing with those nominations.

“Even when the nominee is someone everyone agrees is a perfectly good candidate, it can still take time due to all of these various external factors.” Pressing issues such as the pandemic and Afghanistan would play key roles.

“The Senate is also not in session. They come back on September 13 but nominations will probably not be the very first thing that they get to.”

Ms Bauer was nominated by the White House on July 9.

“Once the candidate is announced by the White House, the next step is for the Senate foreign relations committee to interview the candidate in a hearing. If the committee approves, it is onward for a vote with all 100 members of the US Senate. “If the nominee receives at least 51 votes, they’re confirmed as the ambassador,” Mr Aggeler said.

Once confirmed, the ambassador is formally appointed by President Biden and will take the oath of office.

Mr Aggeler, who was deputy chief of mission in Paris from 2019 to 2021 and minister-counsellor for political affairs from 2017 to 2019, said: “It’s very important to emphasise that throughout the transition our consulate general and presence posts around France have been helping US citizens. That’s always our priority. They haven’t suffered at all.

“While we await the arrival of the ambassador, we continue to engage our French friends on all levels, and that includes President Biden’s engagement with President Macron.

“We have dozens of agencies and offices in our mission who continue to work with their French counterparts on the full range of issues, from counterterrorism to space exploration, and this reflects the multi-faceted relationship we have with France, which is our oldest ally. And that work continues, regardless of the situation with our chief of mission.”

The 1,500 employees in the US mission to France are made up of American diplomats and local French and international colleagues from a diverse pool of US federal agencies, making it one of the largest diplomatic missions in Europe.

Beyond the Avenue Gabriel embassy in Paris, the US has consulates in Marseille and Strasbourg and presence posts in Bordeaux, Lyon, Rennes and Toulouse. The ambassador is also US ambassador to Monaco.

Mr Aggeler is passionate about his role and the country he has called home for the last four years.

“It’s such a privilege because there really is such a sense of friendship between the US and France, based on shared history and values. It makes for a really rewarding experience.

“I think it will come as a surprise to some Americans when they come here just how deep that relationship is.

“You feel it when you go out to small towns across the country, particularly in Normandy. There’s a sense among Americans who haven’t been here that, well, maybe the French have forgotten all our shared sacrifices and shared history, but they have not.”

In the meantime, Americans in France must wait for the Senate’s confirmation of Ms Bauer’s appointment.

Once done, the credential ceremony will be hosted by President Macron at the Elysée, where she will be officially recognised.

ambassador
US
More from Interviews
More from Connexion

Driverless postal vehicles tested in Montpellier
3 December 2021
More from Interviews
More from Connexion
Get news, views and information from France
Join the newsletter
Subscribe to The Connexion