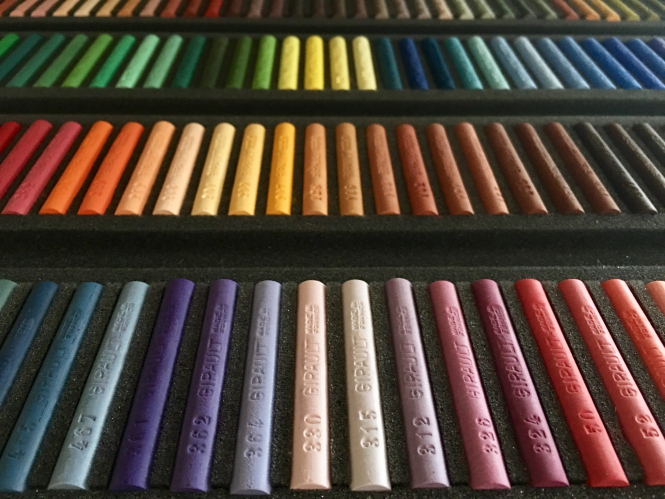 Girault is the oldest company still making dry pastels by hand for professional and amateur artists in France. It was created in 1780 and was taken over by the ninth generation nearly four years ago. Karine and Stéphane Loiseau gave up their work and life in Paris to move to Montignac, Dordogne, to take over the family firm from Karine’s uncle when he retired.

How did the business start all those years ago?
The first Mr Girault was an artist and pastel maker and he created 526 colours; his skills have been handed down from generation to generation.

The Girault pastels won three medals at the Universal Exhibition at Paris in 1878, 1889 and 1900. Then, in 1927, my great, great uncle bought the business – together with its secret recipes.

He was a chemist and he wrote down the exact recipes for all the different colours as before that nothing had been formally recorded.

Then his son, the father of my uncle, and then my uncle took on the company until he retired and I bought it from him three-and-a-half years ago.
Up until then I had nothing to do with running the business, but my uncle was determined that the company, which has the prestigious EPV, Entreprise du Patrimoine Vivant label which rewards French companies for the excellence of their traditional and industrial knowledge, should stay in the family. So my husband and I, with our two children, decided to take on the challenge.

When Girault started were pastels popular?
Pastels were invented in France and in the 18th century they were used a great deal, above all by portrait artists for the Royal family.

Then after the Revolution they were used less until the end of the 19th century when they became popular once again. Edgar Degas used pastels for his famous ballerina paintings, for example.

However, even today – despite their use increasing enormously in the past 10 to 15 years – pastels are unfortunately not valued as highly as oils or acrylics by artists. I think that is because people do not know much about them.

Many people who come into our gallery where we have paintings in pastel on show say they are amazed to see what you can create with them. You can do everything with pastels.

So pastels require a different approach and you can then create all sorts of types of image, from abstract to hyperrealism.

You don’t need to mix colours, as you do with paint because we have such a diversity of tones to choose from.

That is a quality appreciated by pastel painters. Also, you do not need to wait for them to dry and it is a very direct medium.

You do not need a paintbrush, but use the colour directly on to the canvas and then maybe use your fingers to work it as you wish.

Can you draw fine lines?

We think of pastels as creating a soft image.

When you break the pastel, you can create a sharp edge which will allow you to work in fine and delicate detail. You can even use a sharpener if you really want to use it like a pencil, though the colour will not be as intense.

What are pastels made of?
They are made of china clay, which we get from the same quarries that provide clay for Limoges porcelain, mixed with different pigments and water.

The pigments originally all came from natural sources, but there are few places where we can find them now in France, so we get them from other parts of Europe. We try to get those of a high quality, and none have heavy metals in them. Some are natural, but some are synthetic, because today natural pigments, from the earth, like manganese or ochre, for example, are harder to find.

How are they made?
The ingredients arrive as powder. They are mixed with water. Then the mixture is pressed, to get rid of excess water and the resulting paste is kneaded by hand.

This is an important step, which requires a great deal of skill and experience to get it to exactly the right texture.

Each colour needs to be treated differently. My husband makes all our pastels, on his own – and he learnt from my uncle, who spent months teaching him.
As there are 300 colours and it takes between a day and a day and a half to make one colour batch, you can see that the apprenticeship was long.

After the kneading, the paste is put in our extruder machine, which is 150 years old and which creates the sticks, a bit like a child’s playdough machine.

Then my husband cuts them to length, and stamps each one by hand with the colour number and our name. They are then left to dry naturally at room temperature and that takes on average three weeks, depending on humidity.

My husband makes about 1,000 sticks in the same colour at a time – all cut and stamped by hand. In a year he makes around 150,000. We are an international, well-known company, but very few people realise that everything is made by hand, by one person.

It sounds simple, but I imagine you need a great deal of savoir-faire to create your pastels?
You need to have a great deal of knowledge. We have special, secret recipes, which must be followed.

The way you knead the paste to get it to just the right consistency for each colour has to be learnt and felt.

People have tried to copy our pastels, but no-one has succeeded yet. They are created from more than two centuries worth of experience. It means our pastels are different from others.

What are the differences?
For example, our pastels are neither too hard, nor too soft.

Other brands are very hard and others are very powdery, which means they cannot give varying effects.

Our stick is between the two and comes from centuries of thought and research and an evolution in the product which means that today there is a density which is constant and which artists like, because they can use our pastels from beginning to end in one work.

We also keep to the same range of colours, so that artists can be confident to come back to what they know.

This means that museums who want restoration work done, will use our colours because they have remained constant over the years, and a Girault pastel may well have been used for that painting.

You changed career and home to take up the family business. How has it changed your life?
We work all the time, from Monday to Sunday. We took a week’s holiday in February, but that was the first time in three-and-a-half years.

It is a lot of work, a lot of investment, a lot of concessions as we have children and they have to live with that too, but it doesn’t matter.
It is a wonderful job. We work in a company we can be proud of. It is, above all, very satisfying and pleasurable for us to see an artist working with the pastels we have made and see the end result.

That is a magical and rewarding acknowledgement of our work.