Amazing ‘pocket art’ animals made from seeds and leaves 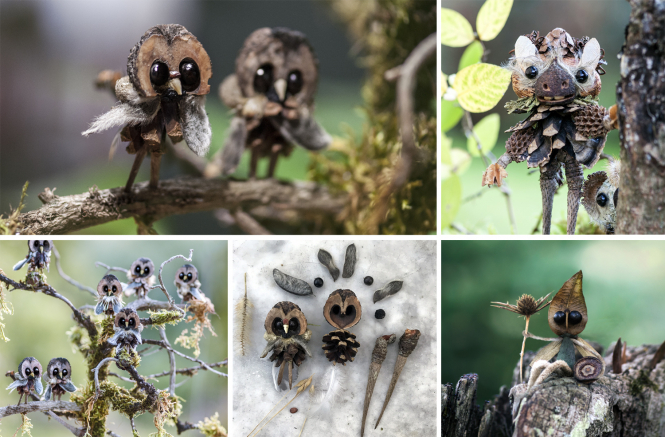 The creator of tiny figurines made of nutshells, leaves and seeds has been “overwhelmed” by the response to his work.

Graphic artist Sylvain Trabut, who illustrates 3D videogames, started making them in 2006 to amuse himself and friends but spent more and more time on what he called “pocket land art” creations.

They range in size from about a one centime coin to around 30cm.

“It was fascinating to express my creative side in a place where I do not have a studio or much workspace,” the Gers artist said.

“On walks, I constantly stop and pick up bits and pieces which might be useful, which I then put in envelopes for when I can sit and figure what to do with them.”

Friends urged him to show them more widely, so he put them on Facebook. “It was incredible. In a couple of days, I went from a small friends and family Facebook page to having 30,000 followers,” he said.

“Regional TV did a bit and the phone has not stopped ringing. But I am not yet ready or able to give more time to these little creations. My life is too busy.” is setting up a graphics and illustration firm and said: “I must concentrate on my business so I can support myself.” People suggested an online or physical shop, a movie or book link, or even a franchise linked to a children’s book... and he hopes to spend more time on them, and even to sell them, “sometime in 2021”.

“It’s a bit overwhelming. I’m happy there is a positive energy and it has brought joy to people when everyone is worried and wearing these horrible masks.”

Each figurine takes “several hours or several days” to make, using pins or natural resins where possible, rather than glue, which Mr Trabut finds “aggressive”. The hazelnut shell and leaf “owls” are the quickest.

Mr Trabut has bursts of making them “on an industrial scale, where I line up the pieces along a table and then go down the line assembling a part at a time”.

Botanists have also helped identify the items used and he admits it is “fascinating”.

Loosely inspired by the Land Art movement, where works disappear as they age, the figurines also change and transform as parts dry out and change colour.

No detail too small for amateur French insect photographer

Caught on camera: Wolves in the snow in French mountains