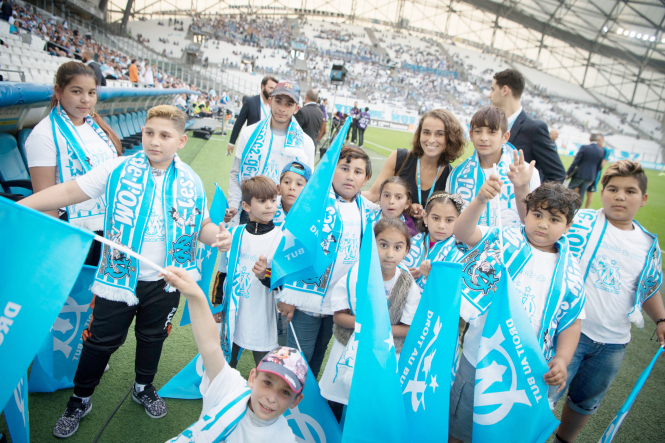 Teacher Jane Bouvier was spurred into action to help migrant families after she saw a television report in 2012 about how a Roma shanty town in Marseille was set alight by an arsonist.

She said: “I was shocked and decided to do something, although at the time I didn’t know what. But when I met the people I realised their children didn’t go to school. I had assumed somebody would be helping the parents make sure they went but it wasn’t the case.”

Ms Bouvier, who speaks native-level French, is from Middlesbrough in north-east England but her family moved to Brussels when she was six and she came to Marseille 15 years ago where she met her French husband.

She is a trained psychologist but was working as a part-time teacher in a school for disabled children before starting her association l’Ecole au présent. She now makes sure migrant children are enrolled in school and liaises between homes and schools.

She said: “Every day a school will call – there might be issues about PT or the canteen, or behaviour, or there’s a meeting that parents need to attend. We do the formalities when the children move to collège and this year there are several going to lycée (age 16-18) which is very encouraging. When I started they just didn’t have the level for that.”

Ms Bouvier said most of the people she helps have come from Romania, which they leave due to poverty.

“They say they were discriminated against. Little by little they were pushed into the countryside after the end of the Communist regime.

“They had no jobs. Here they can find enough in our bins to feed their families. They go through them all day, every day and clean and repair things they find and sell them at flea markets once or twice a week. They make €200-300/month, which is an average salary in Romania. But they live in squats and bidonvilles.”

They are regularly expelled, partly because of not being in formal employment (though they are able to come due to EU free movement rights).

“I ask for a trêve scolaire – no expulsions between September and June, to allow the children to go to school.”

Ms Bouvier said 2016 was especially hard. “They were turned out two or three or four times during the year and some children didn’t go back to school for more than a year. We now have a new prefect for equal opportunities.

“There was a big eviction on October 31 last year but I think now she has decided to respect the trêve, for the children.

“The name of my association means ‘School now’ - whatever the families are going through, I want school to be present for the kids now. They’ve wasted enough time as it is.”

The families are of the same ethnic background as Romany Gypsies but no longer have the travelling lifestyle of their ancestors, Ms Bouvier said.

There are around 1,000 in Marseille, and other French cities with sizeable populations include Paris and Lyon.

She has now helped more than 400 children, mostly Roma plus some of other origins, and she said the families are keen for her help so their children have a future other than scavenging.

“When I started I had to convince and reassure the parents but I don’t any more. They can see from other families that children at school are happy there and the teachers are kind and nice.

“There is racism, obviously, but the teachers are really great.

“Most of the parents never went to school or if they did it was a negative experience. Now they see their kids are like any ordinary Marseillaise children - and we take them to football at Stade Vélodrome [home to the Olympique de Marseille team].”

She added: “The children make me proud all the time. There’s one, Soleda, a girl from one of the first families I met, who got a prize from the mayor for one of the most ‘deserving’ pupils and who is going to lycée this year. The family went back to Romania many times because of expulsions and each time she came back she would say ‘Jane give me something to read to see if I still can’. She’s entering a professional lycée to do dry cleaning, she’s happy and got her first lycée choice.”

A volunteer now helps the parents look for work, she said. “Once they work it opens rights to family allowance and housing benefit. A lot of families live in apartments now, but it takes time – and the most important thing is the children need to go to school.”