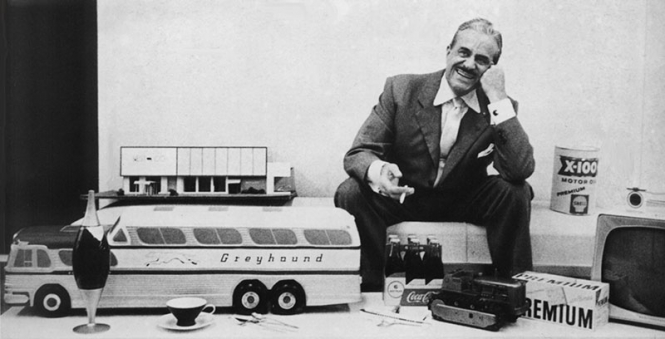 Raymond Loewy (1893 - 1986) was a French industrial designer who is said to have ‘designed the American dream’, and invented the notion of ‘streamlining’.

His designs were so iconic that most people are probably familiar with many of them without realising they were created by the same hand: the Shell logo, the classic Coca-Cola bottle and the Greyhound bus, to name but three.

Born in Paris, he was still in his teens when his passion for aviation led him to design a prize-winning model plane with a propeller which worked using an elastic band. He subsequently sold the design in kit form to model plane enthusiasts.

In 1913, having left school and studied engineering, he joined the army and fought in World War One. He was awarded a Croix de Guerre in 1918.

He was discharged in 1919 and, hoping to get a job at General Electric, went to New York where his brother was already a doctor. He found a job designing displays for department stores including Macy’s, Wanamaker’s and Saks, and also worked as an illustrator for Vogue and Harper’s Bazaar.

He thrived in the American commercial market, perfectly understanding that designs had to be profitable but brought a very French sensibility to his work, determined to make the modern world more attractive and stylish.

In 1929 he got a job at Westinghouse Electric Corporation. “Everything is so ugly,” he complained. It wouldn’t be for long - that same year he came up with the hugely successful redesign of David Gestetner’s duplicating machine and the following year he opened his own industrial design company. It isn’t an overstatement to say that he then set about redesigning the emerging modern world.

At that time ‘industrial design’ wasn’t really considered a profession in its own right, but Loewy’s work helped companies save production costs and increase sales. They quickly understood the value of getting his advice about product development, especially for new concepts.

Loewy’s automobile designs were sleek and stylish. He came up with slanted windscreens, built-in headlights and wheel covers, which made cars more aerodynamic, cutting petrol consumption long before it was a widespread concern.

In 1931 he married the wealthy Jhona Thomson, and in 1938 he became a naturalised American. His first marriage ended in 1945 and three years later he married Viola Erickson. They had a daughter, Laurence.

He designed the Lucky Strike cigarette packet in 1940 after a bet with George Washington Hill, at the time president of the American Tobacco Company - who wagered $50,000 that he couldn’t improve the then-familiar green and red design.

Loewy eliminated the green background, which saved printing costs and also put the red circle on both sides of the packs, increasing product visibility which in turn increased sales. George Washington Hill paid up, and the packaging remained the same for 40 years.

Over the next two decades his designs included every kind of new and exciting product that came on the market, and in 1961, the Studebaker Avanti. It was the world’s fastest road car at the time, and much of that was down cutting its weight. Loewy’s design omitted the radiator grill: “In this age of fuel shortages, you must eliminate weight,” he said at the time. “Who needs grills? Grills I always associate with sewers.”

One of his favourite guiding principles was MAYA – Most Advanced Yet Acceptable. “The adult public’s taste is not necessarily ready to accept the logical solutions to their requirements if the solution implies too vast a departure from what they have been conditioned to accept as the norm,” he explained. His designs would never be outrageously modern; he knew where to draw the line for the general public.

He is particularly remembered for designing kitchen utensils, white goods, furniture, household crockery, televisions, radios and all types of what were then new-fangled electrical appliances.

His passion, however, was transport - trains, planes and automobiles.

Very able to articulate his working ideas, he was a popular lecturer, speaking at the Massachusetts Institute of Technology, Columbia University and the University of Leningrad.

He founded design companies in New York, London and Paris, as well as writing three books (which are still available today): The Locomotive: its Aesthetics (1937), an autobiography called Never Leave Well Enough Alone (1951) and Industrial Design (1979).

One of the secrets of Loewy’s success was innovation

The Coldspot fridge he designed for Sears Roebuck in 1934 featured the first-ever rustproof shelves made from aluminium.

The GG-1 locomotive built by Pennsylvania Railroad in 1936 was welded together instead of being riveted, slashing manufacturing costs and maintenance and making it look more sleek.

He described his concept of streamlining as “beauty through function and simplification” – and applied it to everything from household items like fridges and toasters right the way through to railway locomotives, the John Kennedy Memorial postage stamp, and the interiors of Saturn 1, Saturn V, and Skylab.

From 1967 to 1973, Loewy worked for Nasa, ensuring the “psycho-physiology safety and comfort of astronauts” in space. He came up with simulated gravity conditions and provided them with a porthole so they could see earth, making it possible for three people to live in a space capsule for 90 days.

“I do not believe it would have been possible for the Skylab crews to have lived in relative comfort, excellent spirits and outstanding efficiency had it not been for your creative design,” wrote Nasa’s deputy administrator for manned space flight in a letter to Loewy.

The ‘Father of Industrial Design’ was by this time not only famous but wealthy, with a villa in Palm Springs, homes in Long Island and Mexico, apartments in New York and Paris, and a large house in Rochefort-en-Yvelines.

He designed the livery of the US President’s plane, Air Force One, for JF Kennedy. He also designed himself a holiday home near Saint-Tropez.

In the 70s, he began working on a scheme to ease the tensions of the Cold War. He travelled to the USSR to negotiate a contract with a government agency and the EC (now the EU) Institute of Industrial Research to develop motorbikes and cars for the Soviet Union, under a guarantee provided by the US.

The contract was signed in 1976, but the deal unravelled soon after. Commitments fell by the wayside, ruining Loewy’s international agencies in the process. Loewy sold his shares in 1976, and the following year the businesses were declared bankrupt.

In 1980, Raymond Loewy and his wife Viola retired and moved back to France. He died in Monte Carlo, Monaco, in 1986 at the age of 92. He is buried in the cemetery at Rochefort-en-Yvelines.

His widow Viola and their daughter Laurence subsequently set up the Foundation Raymond Loewy in Hamburg, which awards an annual prize of €50,000 to outstanding designers. Winners have included Philippe Starck (2004) and Dieter Rams (2007).

The documentary, ‘Raymond Loewy: designer of American Dreams’ premiered in 2017 in Paris and subsequently shown on Arte. It is available on YouTube.