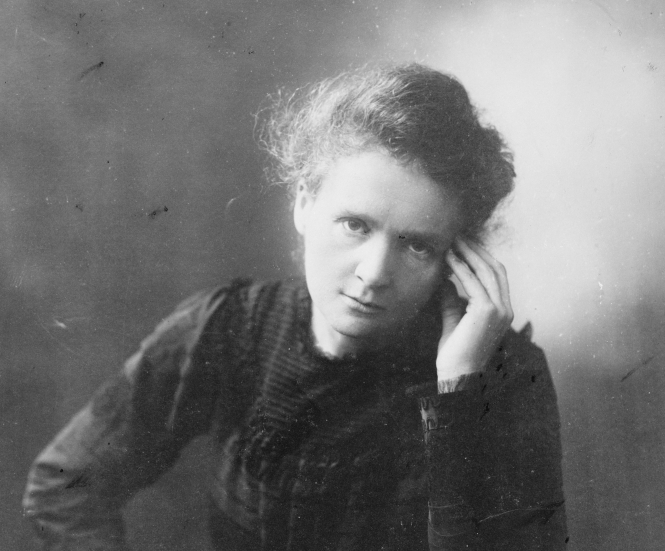 Marie Curie was born 150 years ago this year, in Warsaw, Poland, but has become one of France’s most famous daughters. Born Maria Salomea Sklodowska (November 7, 1867), the youngest of five children, from the beginning her passion for scientific research was unquenchable. As a child, her father instructed her in maths, physics and laboratory work, and after her mother died when she was 10, she was sent to boarding school and then to a grammar school, from which she graduated with a gold medal.

She wanted to continue her studies but women were not allowed to enrol at universities. So she worked as a tutor and, with her sister Bronislawa, attended classes at a clandestine, pro-Polish, anti-Russian, “Flying” (or sometimes known as “Floating”) University.

It still wasn’t enough, however. Both women desperately wanted to advance their knowledge but in Russian-occupied Poland, it was impossible. Maria’s family, on both her mother’s and her father’s side, had already lost their lands and fortunes due to their anti-Russian sentiments, and her father had been demoted at work. So the sisters looked abroad for educational possibilities, and struck a bargain. Maria, the younger of the two, would financially support Bronislawa while she did a medical degree in Paris, and once qualified, her Bronislawa would return the favour.

So Maria became a governess, but still didn’t stop studying; she read widely, exchanged letters with other scholars, and continued studying at the “Flying” University. She also began her practical scientific training in a chemical laboratory run by her cousin. Finally in 1891 at the age of 24, she moved to France and studied physics, chemistry and maths at the University of Paris.

In 1893 she got a degree in physics and began work in an industrial laboratory whilst continuing to study for a second degree which she got in 1894. That year she met Pierre Curie, a professor at the School of Physics and Chemistry, when he offered her some work space in his laboratory. The relationship, fostered by their shared love of science, soon became serious and he proposed, but Maria turned him down as she still wanted to return to Poland. But when the University of Krakow refused to enrol a woman, she accepted an offer to study for a Ph.D in Paris instead.

It was Poland’s loss and France’s gain. In 1895, Maria Sklodowska married Pierre, becoming Marie Curie, and settled down to a life of scientific research and domestic bliss. The discovery of X-rays had just been made, as had the discovery that uranium salts emit penetrating rays. Fascinated by the discovery that uranium rays caused the air around a sample to conduct electricity, Marie Curie decided to take the research further, and went a good way to proving that atoms could be split.

Her daughter Irène was born in 1897 and to earn money, Marie began lecturing at the Ecole Normale Supérieure. As a working mother and a successful scientist in her own right, in many ways her lifestyle was thoroughly modern. Even today, however, very few women follow in her footsteps. “The statistics on female scientists show that there’s almost no change, no more female scientists or mathematicians than there were last century. In biology for example, 60-70% of students are female but 60% of lab directors are male. In other fields things have changed but not in science,” says Renaud Huynh, director of the Musée Curie in Paris.

He puts it down to self-censorship, remarking that young girls still tend to see science as being for men. “But it’s also about boys because although girls are educated about feminism and equality, boys are not. Men need to accept women working and even being more successful with them. Marie Curie’s achievements were facilitated by having a husband who understood her passion for her work, and ensured she got full credit for it.”

It’s extraordinary to realise that the Curies worked in a poorly-ventilated, leaky shed next to the School of Physics and Chemistry, and that because the effects of radiation exposure were unknown they carried out their research into radioactivity with no protection at all. Together, they discovered polonium (named after Poland) and radium, and coined the phrase radioactivity.

By 1902 they had jointly and separately published 32 scientific papers, including one which announced that radium destroyed cancer cells faster than healthy ones.

“The relationship between Marie Curie and her husband was cerebral and intellectual,” notes Renaud Huynh. “If she had married another man perhaps the legend wouldn’t have been made in the same way.” In 1900, she became the first woman faculty member at the Ecole Normale Supérieure and in 1903 was awarded her doctorate from the University of Paris.

The same year, Nobel judges attempted to award Pierre Curie and his colleague Henri Becquerel for their work on radioactivity but Pierre insisted that his wife share the honour and Marie Curie became the first woman to win a Nobel Prize. In 1904, Marie Curie gave birth to her second daughter, Eve, and two years later in 1906 Pierre was run over and killed by a horse and cart. Devastated by her husband’s death, Curie nevertheless continued her research, and later that year she became the first woman to become a professor at the University of Paris.

She won a second Nobel prize in 1911, this time for chemistry. The prize persuaded the government to support her ‘Radium Institute’ (now the Curie Institute) built in 1914, where she researched chemistry, physics and medicine. She was the first person to win two Nobel prizes, and even today remains the only woman ever to have done so.

During WWI she developed mobile X-ray units for use near the front lines, to enable surgeons to operate on the wounded as fast as possible. As a member of the Red Cross Radiology Service, she founded France’s military radiology centre. In 1915, she developed hollow needles containing radon, which was used to sterilise infected tissue. After the war, she continued researching, and also travelled extensively, giving lectures. She died in 1934 at the age of 66, from aplastic anaemia, probably as a result of her exposure to radiation in her lab and during the war.

“She was very aware that she was leading the field as a female scientist, although she wasn’t a feminist as such,” says Renaud Huynh. “The Musée Curie is not exclusively about her, but she is the main attraction because she was the first director of the lab, and we are lucky to have the complete, original office she occupied and her lab, and that attracts a lot of people.”

In 1995, Marie Curie was the first woman to be buried in the Panthéon on her own merit, as opposed to being there as the spouse of a famous man. This month, to celebrate 150 years since Marie Curie’s birth, the Panthéon will open an exhibition about her life and her work which will run from November 8 until March 4 2018. There will also be guided visits of the Musée Curie and conferences exploring the different aspects of Marie Curie, including her relationship with her sister, and the lives of her descendants.

“The main thing Marie Curie brings us today is the importance of being passionate about your work,” says Renaud Huynh. “Over and above her scientific achievements, it’s important to appreciate the energy and love she put into her work, and that love of research and discovery which helped her overcome obstacles. She was truly more interested in doing her work than receiving prizes or money. With that kind of passion you can overcome anything and succeed.”