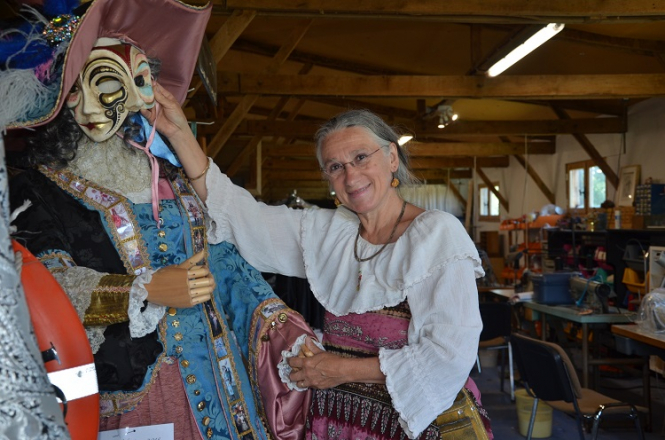 Costumier Cathy Ingrassia and a Venitian costume
By Jane Hanks

Films and television drama demand ever-increasing levels of authenticity when it comes to costume design.

So the craft of a costumier remains a rewarding one –despite an influx of cheaper Eastern European and Chinese imports.

Costumes are in demand not only for the screen, but also for theatre, historical re-enactments and events, as well as for private parties.

Being a costumier is a demanding job, requiring sewing skills, creativity and interest in research.

Most are engaged on short-term contracts, with their own manufacturing space, and they work to order.

A few, however, are salaried and employed by prestigious companies such as the Opéra de Paris or the Comédie-Française.

There are various ways of getting a qualification, though, as in many crafts, you can work in this field with no formal qualifications at all.

That is the case with 58-year-old Cathy Ingrassia, who hires out costumes from her home and warehouse, La Malle aux Costumes, at Audrix, Dordogne (malle-costumes.com).

She has sewn and created more than 10,000 costumes, ranging from pre-history to the present day and including fantasy designs.

Her warehouse, a converted chicken barn, is an Ali Baba’s cave.

Everywhere there are costumes, carefully hung on hangers and protected by plastic film, boxes of accessories, rolls of material carefully sorted by colour, reels of cotton, drawers of buttons and 10 heavy-duty sewing machines, each designed for a different job.

Mrs Ingrassia did not expect to make her living like this, as she studied history at the Sorbonne.

She went on to do a master’s and a doctorate, specialising in medieval dance.

“It was very difficult to get a job, even with a Sorbonne qualification,” she said.

“I had always loved sewing and creating costumes. I have been to the Venice Carnival for the past 27 years and always made my own costumes.

“One year, I won the prize for the most creative costume.

“I had a friend who also sewed and we decided to start a business making and hiring out costumes in Toulon, where we lived.”

Her friend soon left the business but Mrs Ingrassia carried on.

Four years ago, she moved to the Dordogne.

She is completely self-taught, other than taking part in a hat-making course, but says that having a history background has helped.

“I was one of the first to look at the real ways in which people wore costumes in different periods through research and create them in an authentic way. Now most people do that, but it meant from the start my costumes were a little different.”

She can prepare and send an order from one to 500 costumes all over France.

Her husband has created a computer-driven system where she can call up numbered costumes on a sliding rail at the click of a mouse.

She sews less now, making costumes only when they are needed to complete an order.

There is a lot of work as she has to clean the clothes when they are returned and put them away, ready for the next time.

She likes to prepare the costumes with the correct accessories laid out so that when someone receives it, they can immediately see what they will look like.

“The joy of this job is to put stars into the eyes of others. When someone says they were the belle of the ball, then I am happy.”

Most of her work is from businesses or local authorities putting on events, although sometimes she works on films.

She recently provided costumes for a BBC production filmed in the Dordogne.

To do the job, she says, you have to be creative, dexterous and meticulous, enjoy research, be extremely organised and come up with ideas and solutions on the spot, because people always want a costume at the last minute.

She is proud to be an artisan.

“The intelligence in your hands is of equal importance to intellectual intelligence and I am proud to call myself a Maître Artisan de Métiers d’Arts.

Sadly, manual skills are still seen as second best in France,” she said.

Formal qualifications are available. After college, a student can do a two-year CAP métiers de la mode - vêtement flou (freely designed, rather than tailored, fashion), but the government careers advice organisation Onisep advises it is better to do a Bac, followed by specialised diplomas.

Onisep estimates that a starting salary is around €1,895 a month.