The Frenchwoman behind the Remembrance Day poppy 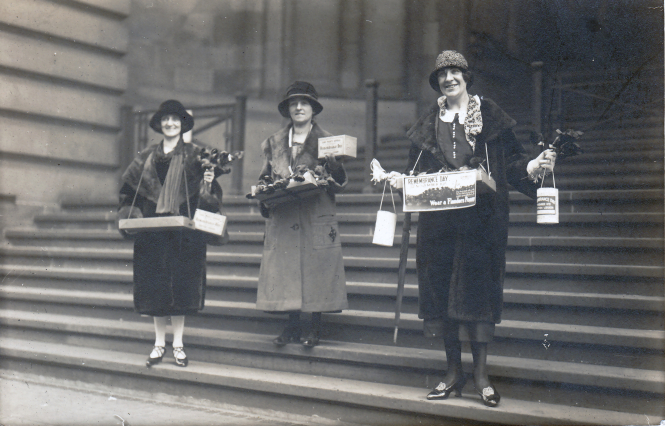 Poppy sellers in 1923
By Emily Jones

Millions of people across the world wear poppies in November to remember those who died in war – and it was a French woman who primarily developed the idea.

Anna A Guérin (1878-1961) was a lecturer and humanitarian who started using poppies to symbolise remembrance as a result of her work as leader of the ‘American and French Children’s League,’ the US branch of a French charity set up to help French women, children and veterans devastated by the World War One.

The charity's emblem was a poppy, which had become a popular symbol to represent the heroes of the war due to its portrayal in the poem ‘In Flanders Fields,’ by Canadian soldier John McCrae in 1915, written following the burial of a friend killed in the Battle of Ypres.

Mrs Guérin started selling handmade poppy ‘boutonnières’ (lapel decorations) at fundraising events for the charity which was established in 1918.

Around the same time, American academic Moina Michaels also began campaigning for the poppy to be adopted as a symbol of remembrance in the US after also being inspired by McCrae’s poem.

Read more: How to buy Remembrance Day poppies in France

At a meeting for the American YMCA Overseas War Secretaries organisation Mrs Michaels wore a poppy pinned to her coat to symbolise her remembrance of those who had died in the war. She gave handmade poppies for other volunteers to wear and campaigned to have the poppy established as the national symbol of remembrance in America.

In 1919 the poppy became more widely worn when Mrs Guérin proposed the idea of using the flower as a fundraising tool to the association the Gold Star Mothers of Baltimore.

The proposal was accepted and plans were made for Mrs Guérin to sell poppy pins to raise 1million francs for children affected by the war in France. She made a silk sample of the poppy and had 10,000 replicas made to be sold at fundraiser days throughout America.

In 1920, the National American Legion agreed to adopt the poppy as its emblem after Mrs Guérin was invited to speak about her idea to hold an ‘inter-allied poppy day’. This day was held on May 28, 1921, and was the first official poppy day.

Veteran groups in Commonwealth countries across the world swiftly followed the example and began to use the symbol to raise money for veterans.
British amateur historian Heather Johnson has spent the last five years studying the life of Anna Guérin.

She said: “She saw the potential of the poppy emblem to help her belle France and those who had survived the First World War, alongside the remembrance of those who had lost their lives in it.

“What singles her out if the fact that her dynamic personality drove forward the campaign. Where she led, so many others followed.

“The more I discovered about her, the more bewitched I became. I continue to be motivated in my research because I know now what people knew about her during the First World War, from the years 1919 to 1921 and in some countries beyond that.

“Her work has been overlooked and others have received the credit due to her. This is my raison d’être – I do wonder how this happened! My family also suffered, as most did, with losses in the Great War.”

In 1921 Mrs Guérin met the founder of the Royal British Legion, Earl Haig, and persuaded him to adopt the poppy as an emblem for the Legion in the UK. The Legion, which had been formed the same year, ordered nine million poppies and sold them in November for Armistice Day.

The appeal raised more than £106,000 which went towards helping veterans with housing and employment. After the success of the appeal, former army office Major George Howson set up the Poppy Factory in 1922 to employ disabled ex-servicemen to make the poppies.

Today 40,000 volunteers distribute as many as 40 million poppies every year in the UK, some of which are still made in the Poppy Factory.