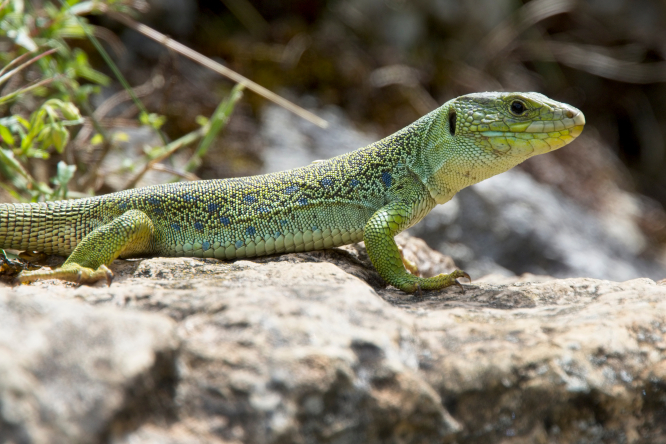 Scientists have pointed out that having a healthy lizard population is also useful for the vineyards, because they eat a large number of the insects which might otherwise damage the crop Pic: tony mills / Shutterstock

A wine co-operative is working to restore drystone walls in vineyards to help save Europe’s largest lizard from extinction. Large males vary in length between 55cm and 75cm.

Scientists say changes to agricultural and viticulture practices, especially increased use of pesticides and removal of grass borders, more cars and domestic pets all account for the lizard’s decline.

Atmann Afanniss, general manager of the Cascatel-des- Corbières co-operative, told The Connexion: “It all began when one of the lizards was seen in the buildings of the cave.

“We caught it and released it but then realised that it was the same lizard that the scientists had been warning about – that their numbers were falling sharply.

“It was from this that we decided to launch in 2018 a programme to help educate our growers but also the public about the lizard and to take practical steps to help save it.”

The lizards, which are bright green with blue spots on their sides, were often seen in the vines in earlier times and were liked by wine growers, so the co-operative’s efforts fell on receptive ears.

Practical steps by vine growers include leaving more grass along the edge of their vineyards to encourage insects, the lizard’s main food source.

They also started a programme of restoring the drystone walls which for centuries have marked out different parcels of vines, and which provided shelter for the lizards.

“As our efforts developed, there was more and more interest and it has expanded to the point where we now have a €20,000 programme where in one part, we are creating a ‘lizard trail’ starting from the co-operative.

“Walkers can hike to spots where they have a chance of seeing a lizard and where information boards about the lizards explain why they are important.

“The other part is providing practical help to vineyard owners to restore the drystone walls, including having a programme where people with disabilities come and help do so,” said Mr Afannis.

The Aude department is putting up 80% of the cost of the programme and the cooperative’s contribution of €4,000 has been raised by making 4,000 bottles of a special ‘lizard wine’ called Timon Lepidus (the Latin name for the lizard).

One euro of the €10 price will go towards the programme.

The wine is a 2018 IGP Vallée du Paradis, and is a blend of 50% wood-aged merlot, with grenache and syrah, also wood-aged, making up most of the rest.

The wine, and other wines from the co-operative can be bought at the co-op, at some wine merchants or online from vin-cascastel.com.

Scientists have pointed out that having a healthy lizard population is also useful for the vineyards, because they eat a large number of the insects which might otherwise damage the crop.

Most herbes de Provence sold in shops are not authentically French
17 September 2021
More from Environment
More from Connexion
Get news, views and information from France
Join the newsletter
Subscribe to The Connexion