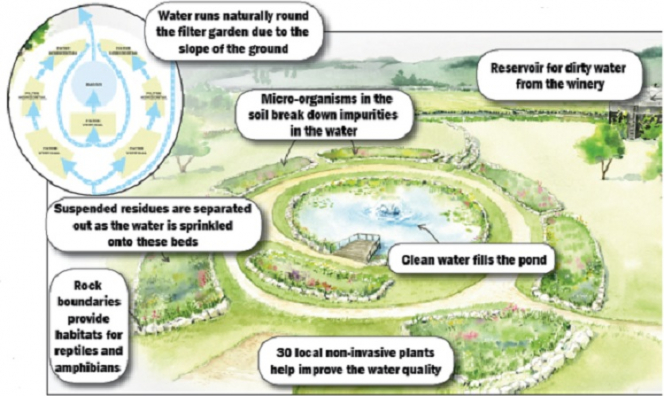 Inspired by nature, the Jardin des Filtres clears pollutants from the water
By Ken Seaton

The garden was opened days before the 188 viticulteurs in the Vignerons de Buzet cooperative started their vendanges to produce around 12million bottles of wine.

Built on a slope beside the winery to help the water move between the treatment stages, the garden recreates a natural eco-system with 9,000 plants from 30 local non-invasive species – plus frogs in the central pool.

Sited on the Baïse river beside Bordeaux vineyards, Buzet covers 27 communes near Agen in Lot-et-Garonne. It received AOC status in 1973.

Water polluted with wine and grape juice residue was previously spread on nearby fields but the garden allows épuration naturelle, oxygenating the water by sprinkling it at the top of the 5,000m2 garden. Interactions between plants, micro-organisms and soil release the organic pollutants before it flows into the pond and nearby river.

Yoan Lecuona, head of RSE, said: “Preparing the garden took two years’ research and we linked with Blueset, who create plant-based filtration systems for both industrial and household waste and swimming pools.

“It is a natural process which fits with our aims to improve biodiversity, cut energy and water usage.”

Wine production uses about 15million litres of water a year to run its processes plus cleaning the equipment and the coop’s long-term aim – if the law changes to allow it – is to reuse the garden water as part of its plan to be self-sufficient in both water and energy within a decade.

The garden’s scale and its natural eco-system makes it an industry first and is a visible statement of the cooperative’s eco-friendly production.

Depending on the location, vines can demand from seven to 20 applications of fungicide to deal with mildew and botrytis plus one or two of insecticide a year but the Buzet vignerons use as few chemicals as possible and choose those that are least harmful.

They have switched to alternative methods and use 100% organic fertilisers over the 1,870 hectares and have 40% of the area carpeted with vegetation to protect and enrich the soils and improve biodiversity.

That means growing flowers and other plants between the vines – and, in doing so, creating a safe environment for the bright red Tulipe d’Agen, which is on the French red list of endangered plants due to changes in farming methods and over-picking.

Buzet communications head Mar­iane Riboulet said Gueyze was “like an open-air laboratory where we test innovations and, if they make a difference, pass them on to the vignerons”.

It was there they moved to increase biodiversity by saving the chouette chevêche little owl, fast-disappearing from French farms, and became the first wine area to install beehives and create the Bee Friendly label in 2014.

Buzet has also made a name with innovative packaging as its wooden cases are made to have a new life as nesting boxes while upturned bottles full of seeds can become bird feeders.

The winery garden is open for visits with a tour of the cave costing €4.