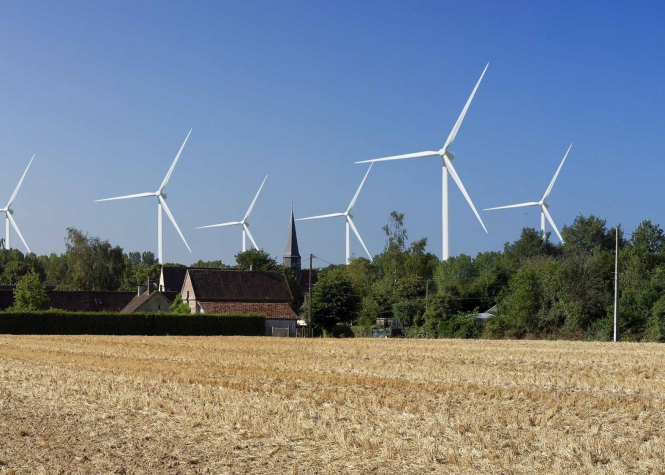 There's no time to lose to save this landscape that Proust loved... Photomontage éoliennes autour de Méréglise. Source Sites & Monuments
By Connexion Journalist

Locals lost early protests against the plan for eight to 12 turbines around Illiers-Com­bray in Eure-et-Loir, which is still much as described by Proust despite the six windmills already under construction. TV historian Stéphane Bern, who leads the government lottery programme to restore heritage sites, is patron of new association Sites & Monuments.

Its president, Julien Lacaze, has raised the profile of the protest and launched a petition. He told Connexion of Proust’s love for the area, 25km south west of Chartres. “He describes a countryside in two parts, in one part a flat plain where the only view of human activity is a church spire, and the other a wooded river valley, both of which are still pretty much as they were in his time,” he said. “This project will encircle the area with these massive wind turbines in every direction.”

Good cause: French animal sanctuary in urgent need of donations

The village of Méréglise, renamed Méséglise by Proust in his novels, is closest to the park, and its church spire, as described in the book, will be insignificant against them, the association says. It has made a photomontage of what the turbines would look like. Communes in the area all voted against the project, except for the two which will benefit from taxes imposed when the wind turbines start turning.

Opposition has also come from the departmental architect for Bâtiments de France because of the impact on the church and on a chateau also described by Proust. The departmental committee that oversees countryside matters and historic sites voted for the plan after a first vote against was ruled illegal.

Positive use of the land: renewable energy

Some members of the committee were told their mandate meant they had no choice other than to vote in favour. A decision will be made by the Eure-et-Loir prefect but no timetable has been given. Promoter JP Energie Envir­on­nement said in an email that it met all the requirements in the latest government energy plan, updated in April this year. “This calls for 40% of France’s electricity to come from renewable sources by 2030.”

It said the project also met all the requirements for developing wind power laid out by Centre Val-de-Loire regional council and policies of the Communauté de Com­munes Entre Beauce et Perche, which wants to develop renewables. It added that the state bank, Banque des Territoires, was a financial backer of the project.

There is increasing opposition to wind turbines, even from environmental groups, but the government is keen to push on, although the then-environment minister Elisabeth Borne warned in Les Echos in February that some projects “pay no respect at all to the landscape”. A committee has been set up to speed planning and approval of wind turbine projects, most of which have been delayed.