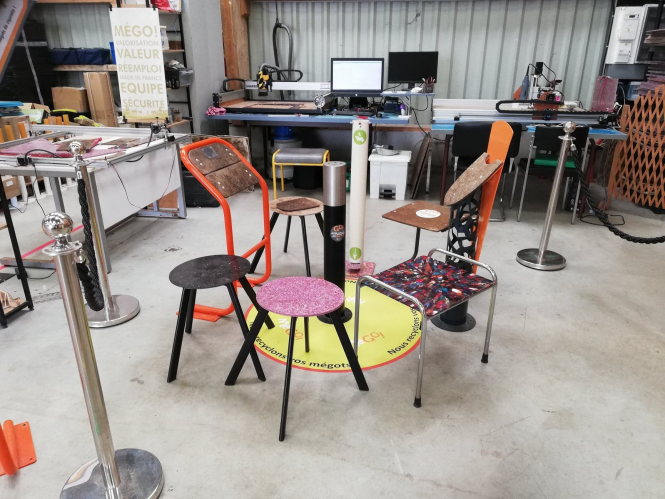 Cigarette ends are being recycled by a French company into furniture and other objects to reduce pollution.

MéGo! – a play on words on mégot, French slang for the stubs – is the first company in Europe, and maybe the world, to carry out such a process.

It has perfected a process where cellulose from the filters of cigarettes is recovered. Then it is formed into sheets which can be used to make street furniture or household objects, such as computer tablet holders.

The remains of tobacco and ash are composted until usable, and the firm is exploring if even the toxic residue can be broken down by fungi and thus also composted.

Bastien Lucas, CEO and founder of the firm, which was set up in 2017, said: “It is clear that something had to be done."

“For years, cigarette butts were just ignored, but now we know how polluting they are.”

Scientists estimate that it takes at least 12 years for cigarette butts to break down in Europe if they are thrown on the earth.

When they get wet, or fall into a river or the sea, it takes an hour for toxins, including tar, nicotine and various salts, to leach into the water.

In other parts of the world, it can take even longer for cigarette stubs to break down – scientists in Zimbabwe in the 1980s found some in the bush that they discovered were thrown away 40 years earlier.

Mr Lucas, who stopped smoking five years ago after a 15-year habit, was running another company, EcoAction Plus, which specialises in recycling office waste, when the idea of doing something about cigarette stubs took hold.

“It is very complex because cigarette stubs are toxic, so recycling them poses many questions and problems, not least, for example, the smells they produce,” he said.

“We had to make sure we had a process where we were certain it was worthwhile, the energy consumed was not so high it would cancel any benefit, that our staff could work in security without being exposed to the smells and dangerous chemicals concentrated in stubs, and that in the end we had a product which had a use."

“At each stage, we were prepared to stop if things did not work out.”

The company was privately funded, initially as part of EcoActionPlus, before being spun out and getting bank loans.

Mr Lucas said the recycling company is “barely profitable” at the moment but he is confident that as processes improve, it will become a money earner.

Meanwhile, he continues to run EcoActionPlus.

The sheets of cellulose produced by the process are mostly left in their raw dark brown state, rather than being further processed with resins and other chemicals into more refined plastics, as a deliberate choice, to reduce the environmental footprint.

MéGo!, based in Bourg-Blanc, near Brest in Brittany, also set up a system of collecting cigarette stubs from cafes and other places where people smoke.

Partners in the collecting system include the commune of Landerneau, where mayor Patrick Leclerc said stopping cigarette stubs getting into the sea was of vital importance.

Agents have been appointed in the main towns and cities of the region to ensure a supply of stubs.

Interest in the project has been high

There has been much interest from large French companies and from overseas.

Detailed inquiries about the possibility of using the process developed and patented by MéGo! have come from places as far apart as Brazil and Australia, but Mr Lucas warned that it might take time.

“It is a complicated process and not easy to replicate elsewhere, and the other factor is that we here are constantly learning and refining the process,” he said.

“Investors who think they can just rush in and start copying what we have done quickly realise things are not so simple. But hopefully the process will be exportable under licence in the future, both in France, Europe and the rest of the world.”

French trainers made of sea-dumped plastic