Cookie Consent by FreePrivacyPolicy.com Snakes in France: What kinds are there and where will you see them? French News and Views in English | The Connexion
15 may 2021
Classifieds Currency exchange Newsletter
Login Register BASKET
Facebook Twitter

Snakes in France: What kinds are there and where will you see them? 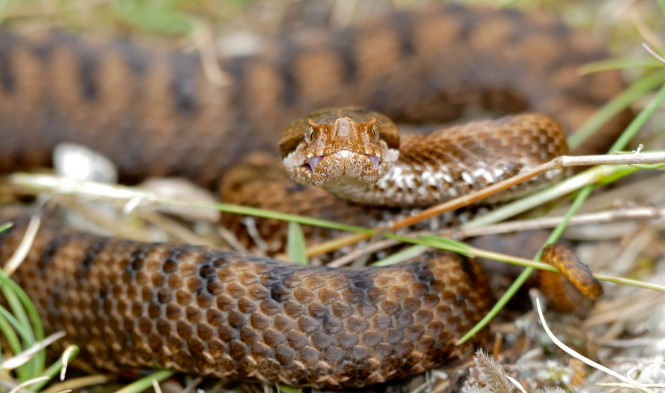 April is a time when snakes come out of hibernation and are often seen, especially as they bask in the sun’s rays on cooler mornings
By Brian McCulloch

It is now illegal to kill any snake in France, including poisonous vipers.

The new law follows a change in awareness of how important snakes are to the eco-system, said Matthieu Berroneau, a snake expert with the organisation Cistude Nature.

'There is a deep and irrational fear of snakes in France'

“It is true that there is a deep and irrational fear of snakes in France,” said Matthieu Berroneau.

“It is handed down through the generations and the first reaction of many people when they see a snake is to kill it – something which is now illegal.”

There was an exception in the law which allowed people to kill vipers but now anyone who does so risks up to two years in prison and a €150,000 fine.

A record number of snakes were sighted in gardens in France last year due to people spending more time at home during lockdown.

They are also encouraged to send in photos, so snakes can be identified.

By June last year, 200 calls had been made to the line.

April is a time when snakes come out of hibernation and are often seen, especially as they bask in the sun’s rays on cooler mornings.

“We tell people that it is natural to see snakes in the garden, like it is to see birds and hedgehogs, and they should not worry – snakes will flee humans,” Mr Berroneau told The Connexion.

“Only when there is a snake trapped inside a house will we try to catch it, to release it elsewhere.”

The country has a nationwide system of anti-venom for use when people have been bitten by vipers but Mr Berroneau said modern medical practice is to use it only in the most serious cases.

“Viper poison is slow-acting so the doctors can see how it progresses,” he said.

“Generally, if someone is bitten on the hand and the poison stays in the hand, then anti-venom will not be given, but if it starts to move into the arm, then it will be used.”

The last publicised death from a snake bite in France was around 10 years ago when an enthusiast, demonstrating handling snakes to members of the public, was bitten by a viper and then also suffered a heart attack.

National statistics on bites are hard to find but an article published in 2002, Venins de serpents et envenimations by J-P Chippaux, who has carried out a study with the Institut Pasteur aimed at improving an antivenom serum, says the chance of being bitten by any snake, poisonous or not, is 3.5 per 100,000 people.

Vipers are now classified as in decline and vulnerable, and Mr Berroneau said he hoped the new law would help reverse this.

There are four types of viper in France, the most common being the vipera aspis, with a range covering three-quarters of the south of France.

It has many colour variations but can be distinguished by dark stripes on its back, a break and then stripes, and by its arrow-shaped head and eye pupils which are slit-shaped like a cat’s eyes.

Vipers have thick bodies and are relatively slow-moving, and an adult vipera aspis is usually between 70 and 90cm long.

Another viper, viperia berus, is found in the north of France and at high altitudes in the mountains, while two other species have limited ranges: one in the Alpes-Maritimes mountains and the other in the Pyrénées near the Atlantic.

The most common snakes in France are couleuvres, which are not poisonous to humans, although they do have a venom which kills mice and other small creatures.

A legend, sometimes heard in country areas, that they got their name from their habit of licking their lips is not true, according to experts.

There are eight varieties of couleuvre but generally they have slimmer bodies than vipers, are longer (up to two metres), and are quick and agile. If you get close enough to see their eyes, the pupil of a couleuvre is round, as opposed to the slit of the vipers.

When threatened, one species, the couleuvre vert et jaune, reacts by putting on an aggressive display, opening its mouth and hissing.

They are common in the south west and the centre east of France. Mr Berroneau says they are responsible for most of the panic calls to the SOS Serpents line – even though there is no risk of poisoning if they do bite people.

The couleuvre vipérine looks a lot like vipers and even mimics viper defence tactics of curling its body, lowering its head and hissing. It is found in the same areas as the vipera aspis.

A nationwide list of numbers offering services similar to SOS Serpents d’Aquitaine is being drawn up, and should be published online later this year.

Environmental news in France for April 2021