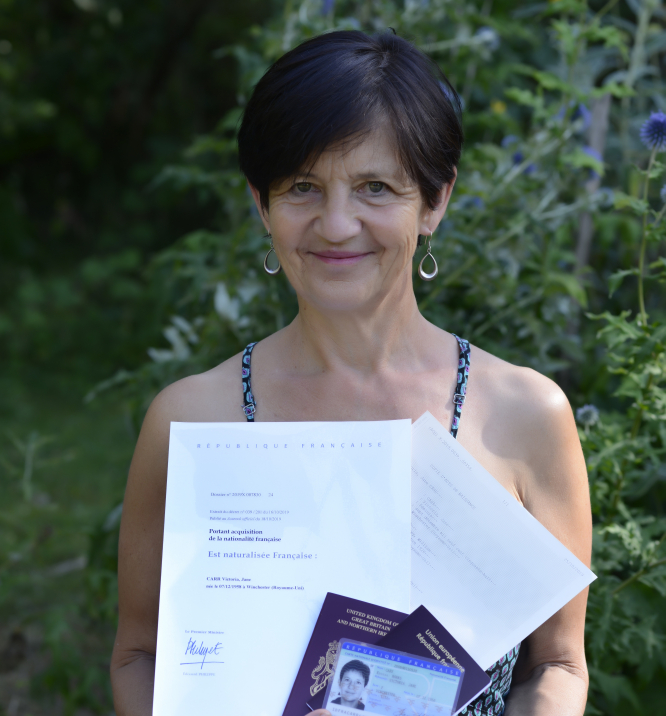 Journalist Jane Hanks replies:
I am now the proud owner of a French identity card, passport, birth certificate and a decree saying I am naturalisée Française. I also still have my British passport.

Here's how it worked out for me...

The decree was handed over to me in July 2020, three years after I had sent in the required dossier. It had taken a few weeks before that to get the papers together.

Regions deal with nationality in different ways and my experience relates specifically to people living in the Nouvelle Aquitaine. I have grown-up daughters in both Brittany and the Midi-Pyrenees who applied a little after me, but are still waiting for news.

The first step is to pass one of two authorised language tests at an approved language centre. When I took it there was only a spoken and listening test and candidates were exempt if they were over 60.

From August 11, 2020 there will, in addition, be a written test and the exemption rules change, so that regardless of age nearly everyone will have to take the language test.

You will now only be exempt if you have a disability or chronic health deficiency which prevents your level of French from being evaluated, you have been educated in French in a French-speaking country or you are a refugee, who is over 70 and have lived in France for at least 15 years.

The two authorised tests are the TCF and the TEF. They are similar, just set by different organisations. Candidates have to achieve a European B1 level, which is an intermediate level and means you have an efficient but limited grasp of French. You can understand clear standard French within familiar and well-known subjects. You can get by while travelling, speak about matters that interest you and give brief explanations about a project or an idea.

From August, both the TCF and TEF will last 1h50 in total and are made up of a listening test, a written comprehension test, a writing test when you have to answer three questions: where, for example, you might have to describe a friend or an event, and a speaking test when you talk to the examiner.

The test is quite tough, and like all exams it is worth doing some 'mocks' to learn the techniques. You can find these, plus TEF test centres, here
Click here for example TCF French language tests and here for the approved TCF test centres.

To show you have all the requirements to apply for nationality you also have to compile a dossier and be interviewed.

In some regions candidates apply for a rendezvous for the interview and take your dossier with you. In Nouvelle Aquitaine, candidates send off the dossier and are called for interview at a later date.

What you need in your French nationality application file

As well as the language certificate you have to send birth and marriage certificates for yourself, your parents and children under 18, translated by a sworn translator. You can find one at directory-sworn-translator.com. They charge between €30 and €80 per document, sometimes with a reduction for several certificates.

I sent off my dossier in July 2017 and I heard no more until November 26, 2018, when I was given two weeks to produce more documents - including all the pages from my tax declarations and tax statements for three years, a new bordereau de situation fiscale, an electricity bill, a copy of my marriage certificate that was less than 3 months old (I was married in France), certificates from my employers that were less than three months old, a new identity photograph, and a list of all the addresses I had lived in since birth.

A very fat envelope was duly sent off.

On December 27 2018, I received another letter asking me to come for interview the following month, and another list of further documents. I was invited to consult the livret citoyen which would serve as a basis for the interview which would have as its aim: “to check you have a sufficient knowledge of the French language, the rights and duties conferred by French nationality, but also the history, culture and French society.”

Download the livret citoyen here
I duly swotted up on the livret, which includes several dates and details of historical personalities that it is worth knowing, and details of the constitution, including the number of years between Presidential elections.

The interview itself lasted just over half an hour.

It had not been a waste of time learning the livret. The majority of the questions I was asked were based on the political structure and the symbols and duties of a French national as outlined in the booklet.

Examples of questions are: Give a definition of the republic; What does equality mean? What are the symbols of France? (there are four and they include July 14 which I had not thought of as a symbol), What is laïcité and what was the significance of the 2004 law? What is the role of a deputé ? Do you have family in the UK and how often do you go back? Why have you chosen to request French nationality? Do you belong to any associations?

There were just a few history questions and I was asked for the name of a French mountain. At the end I was asked to sign a paper saying I agreed to adhere to the charter of rights and duties of a French citizen. It was stressful because the outcome was so important to me. I left feeling as you do at the end of a job interview when it seems to have gone well but, in fact, you have no idea what they think of you.

There was no news until October 2019, when my name was published in the Journal Officiel - which meant nationality had been granted.

Usually this is followed by a ceremony for the latest group in a Department to have been naturalised. Everyone is given their decree and sings the Marseillaise together. I was invited to attend in April, 2020, but the ceremony was cancelled due to Covid-19 and instead I was invited to collect the papers at my Prefecture at Perigueux, Dordogne, in July.

Applying for a French passport

Once you have the birth certificate you can apply for a passport and identity card at ants.gouv.fr which is followed by a visit to a local Mairie that has with a machine to take a copy of your finger print.

The whole process is long and costly and can cause several headaches as you struggle to understand just what is required.

However, the vast majority of British who apply are successful. The Department for Foreigners in France told Connexion that only 6.5% were refused in 2019, compared to 30% for applications by all nationalities.

In the end it is well worth it, if you plan to stay indefinitely in France, as you do not have to worry about the effects of Brexit and it could make some administrative tasks that much easier.

It also means you can vote in national elections, something I have not been able to do for several years as I have lived in France since 1991. The big question, now, is which passport shall I use when I travel abroad...