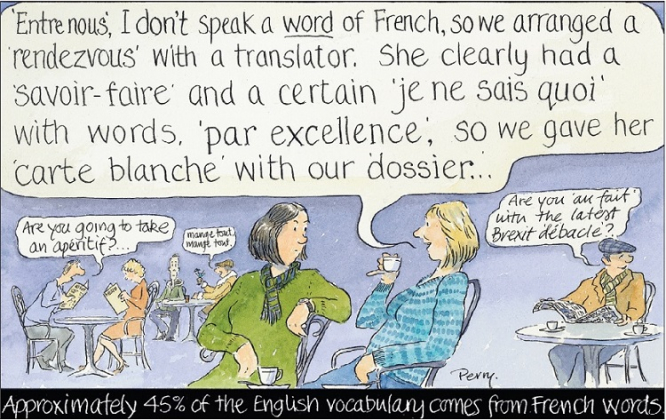 You will be asked to use a traducteur agrée – a translator on a list of legal experts complied by the courts – if, for example, you apply to change a foreign driving licence to a French licence.

The translation is referred to as traduction certifiée conforme à l’original or officielle.

Any translator who wishes to work with the courts on legal cases and translate official documents can apply to their local Tribunal de Grande Instance to become authorised.

They will be taken on if their qualifications and experience are sufficient and if there is a need in that area.

They will then be put on a list (tinyurl.com/rc5hmel), which is held by the Cour de Cassation and revised every year. Translators have to reapply every five years.

Catherine Renaud from Metz, a translation expert who works from English to French and is also a member of the Société Française des Traducteurs, the translators’ professional body, said: “It is not a regulated profession and there are no specific qualifications to become a traducteur expert.

“However, the courts will look very closely at people’s dossier before they accept someone. They will require a professional qualification and the person will have to continue attending training courses.

“For languages like English, there is a lot of competition to get a place, so you have to be very well qualified. For some of the less common languages, they have to take people on who have less experience.”

There are 150 languages covered by expert translators, with figures from 2015, the latest year available, showing 3,899 people working with the status.

Lack of regulation also means that translators can set their own price.

“This has its advantages and its disadvantages for the profession,” said Mrs Renaud.

“For the client, it means it is worth asking for prices from several different translators before you take someone on.”

Prices for a birth certificate translation, one of the most straightforward documents, can range from €30-€80.

“Although the words are not difficult to translate, it is a fastidious task, which takes time because it is also a question of presentation so the documents look alike,” said Mrs Renaud.

Factors to consider may include speed. One Connexion reader was quoted €75 a page by an agency for a priority service in 48 hours, although some translators will give a discount for working on several documents at a time.

Translators working alone may be cheaper than agencies and, predictably, prices in Paris are often higher than elsewhere.

Up to now, sworn translations have been required for anyone requesting French nationality, and the price can soon mount up as birth and marriage certificates are not only required for the person concerned but also for their parents and, if applicable, any children under the age of 18.However, while the UK is still part of Europe, there should no longer be a need for a sworn translator in these cases.

From February 16 this year, public documents issued in one European Union country must be accepted as authentic in another member state and can be sent with a multilingual standard form (MSF), available in all EU languages to present as an aid to avoid translation requirements.

Mrs Renaud said she welcomed the move because translating birth certificates is tedious work but she thought there might be issues if there were names of occupations of people on a certificate that would not be translated on a standard form, so authorities might challenge them.

After Brexit, it is not known whether the MSFs from Britons will still be available or accepted by other EU states.

Information on the gov.uk site states: “Multi-lingual standard forms may not be recognised by EU member states once the UK has left.

“Individuals should contact relevant authorities in EU member states to check whether they will accept MSFs post-Brexit.”

You can find sworn translators at directory-sworn-translator.com in English.

You do not have to use someone in your area.