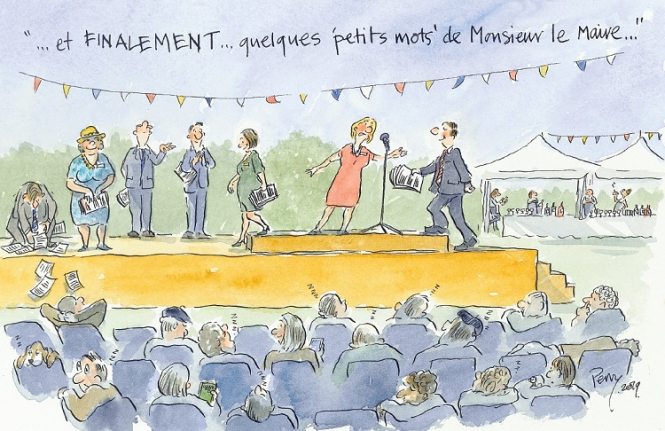 The mairie – the mayor’s office or town hall – has a key role at the heart of every community. For British residents and homeowners in France, especially in rural areas, it is useful to know what actually goes on inside the smartest building in the village...

Mainland France is divided into more than 36,000 communes, each of which has an elected maire.

The most important person in a village or town, the mayor, is referred to as Madame le maire or Monsieur le maire (for language enthusiasts, the masculine le maire is because it is referring to the office of the mayor and not the person).

An annual political confidence ‘barometer’ by the university Sciences Po shows that year after year mayors are the only elected politicians as a group attracting more than 50% of general confidence.

Sciences Po researcher Bruno Cautrès said it is because they “embody accessibility, devotion, down-to-earth politics and the weilding of power in a modest way”.

This esteem was shown this summer in the outcry and sadness after a mayor in the Var died after being run over preventing people in a van from fly-tipping.

Yet at the same time one long-time mayor was quoted by 20 Minutes saying that some locals today freely insult the mayor if they disagree with local rules while at the same time being more demanding about enforcement of rules they like.

Even so, she said, luckily far more people visit for help than to contest or insult (see The Connexion’s article here).

A maire should always be addressed using the formal vous, out of respect for their standing in the community.

The maire runs the commune with the help of his or her adjoints (deputies) and the conseil municipal (the town – or village – council).

Mayors are not technically paid but receive compensation for their time by a set grid (see annuaire-mairie.fr/salaire-maire.html).

This local layer of administration has key responsibilities, including primary and nursery education; the maintenance of roads; and sport and culture in the commune.

So, any problem with the road or drainage outside your property, or enrolling a child at an école maternelle or primaire will involve a visit to the mairie (collèges are run by the department, and lycées by the region, so have different administrative requirements).

It is your local mairie that sets – and receives – your local taxes. These form a key part of the municipal budget, and can be why the taxe foncière, for example, may vary between neighbouring communes: the conseil municipal can choose to raise it to generate income to finance specific projects.

The mairie also holds the register of births, deaths and marriages for the commune.

If you suffer a bereavement in France, the mairie of the commune where the death took place has to be informed within 24 hours.

Similarly, a baby must be registered at the mairie of the place of birth within five days and it is where locals marry. T

he mairie can advise and help with planning applications and – for smaller projects – approve a déclaration préalable de travaux. It has the carte communale, a map of the commune that shows which parcels of land can be built on.

It is the place to go if you require an attestation to prove residency, or for information about recycling.

If you live in a rural community and plan to have a bonfire, the mairie may need to be informed. The regulations for burning garden waste differ across the country, so check at the mairie for the rules in your department to avoid a fine.

At other times, the mairie is a source of information. The secretary there is usually well informed and happy to give out details of local doctors, dentists, artisans or sports clubs and societies.

This is also the person to see if you have lost a pet or found a stray.

A child going on a residential school trip might be offered a subvention, or grant, from the mairie: rural communes, in particular, make provision for this in their budget.

In short, the mairie is central to everything that happens in a commune, and the smaller the commune, the more your presence will be noticed – and appreciated. When you settle in a rural community, it is helpful to take in a copy of your passport for their records – you will probably find they already know all about you!

If you have a second home in rural France, the mairie will appreciate having your UK contact details in the event of a problem with your property while you are away.

A good relationship with the mairie generates goodwill, which can be useful for administrative procedures and planning applications.

It also helps you integrate into a rural community.

It can be developed by simply going in and introducing yourself (even with limited French); by getting involved in local clubs; or by attending events such as the mayor’s voeux in January, when the maire wishes his or her adminstrés (the people of the commune) a happy new year.

The maire and conseil municipal are elected every six years (the next élections municipales will be held in March 2020).

If Britain has left Europe by then, British citizens will no longer have the right to vote. But if there is further delay you will still be able to have your say in who runs your commune. And you can register to vote... at your mairie.

Article by Sally Bird, who has been a member of the conseil municipal of Badefols d’Ans in the Dordogne since 2014.