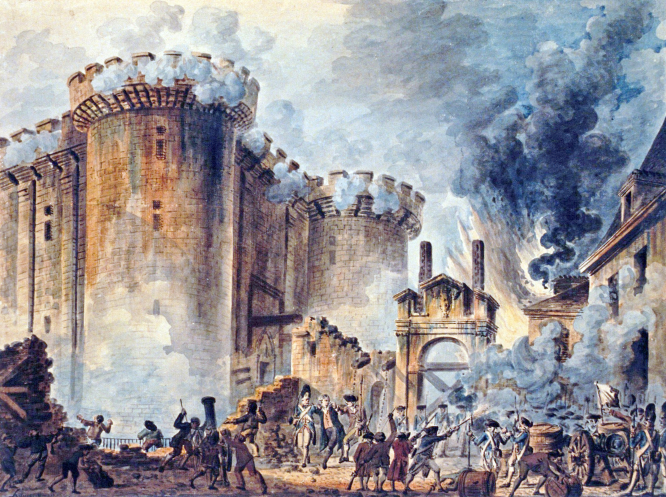 The storming of the Bastille
By Connexion journalist

If you are British, you probably know the significance of the date 1066, who Guy Fawkes was, that Shakespeare was one of the greatest writers in history, and that the country is a constitutional monarchy and a parliamentary democracy.

So what are the elements that every French person should know about their country – and, more importantly for those going for French nationality, that the State thinks people should know about France, its culture, its history and its constitution?

The answers are to be found in the Livret du Citoyen, published by the Ministère de l’Intérieur and essential reading for anyone who wishes to ask for nationality.

The most important date is the storming of the Bastille on July 14, 1789, and all that it stands for.

Nearly half the booklet is devoted to a description of the political make-up of France, its symbols, the rights and duties of its citizens, and the 17 articles of the Déclaration des Droits de l’Homme et du Citoyen as they were set out in 1789.

The four symboles were created at the time of the Revolution.

They are July 14; the Marseillaise national anthem; the bleu, blanc, rouge tricolour flag, which was made up from the royal white flag and the red and blue flag of Paris; and Marianne.

Marianne represents liberty. Images of a woman wearing a Phrygian cap, which was worn by the freed slaves of ancient Greece and Rome, first appeared during the Revolution.

It is thought that she came to be called Marianne because Marie-Anne was a popular name during the 18th century.

One of the most famous pictures of her is in a painting by Eugène Delacroix in 1830, where she is seen bare-breasted, carrying the tricolour and wearing a bonnet phrygien.

From the 1870s, when the Third Republic began, statues of Marianne began to appear in mairies up and down the country, where they can still be seen today.

She also appears on stamps, money and official documents. She features prominently on – and in – the livret.

The devise, or motto, of France is well known – Liberté, Egalité, Fraternité.

In the booklet we are reminded that if someone does not adhere to the principle of the equality of the sexes they can be refused nationality.

Also, an employer cannot refuse to hire someone because of their origins, their religion, their ethnic background or their sex.

Secularism, laïcité, is a fundamental principle, meaning that the State is neutral about religion and everyone is free to choose their religion – or to choose not to have one.

The official separation of the State and the Church was in 1905.

In 2004, a law was introduced making it illegal for pupils to show any religious signs in the way they dress in school, because “school is a public institution which teaches all citizens: so it must remain neutral towards religion”.

The rights and duties of citizens include respecting the laws of the country, contributing to the financing of public services via taxes, contributing to social cover via social benefit payments, and participating in the army in times of war.

France is a democracy where the government is “of the people, by the people and for the people”.

It has a written constitution – the present one was drawn up in 1958, the date of the Fifth Republic.

The president can be elected for a maximum of two five-year terms.

Parliament is made up of the Assemblée nationale and the Sénat.

The Assemblée nationale is made up of the deputés, who are elected to office in a public vote every five years. Sénateurs are elected locally by a college made up of deputés, sénateurs and regional, departmental and local councillors every six years.

Councillors at regional, depart-mental and commune level are elected every six years.

Communes are responsible, notably, for primary and nursery schools, cultural and sport activities, the upkeep of roads, and registering births, marriages and deaths.

There are 101 departments and they are mainly responsible for public transport, collèges, and care of the elderly and the very young.

The 18 regions, of which five are overseas territories – Guadeloupe, Guyane, Martinique, Mayotte and La Réunion – are responsible for public transport, professional training and the construction and maintenance of lycées.

The world-renowned cave paintings at Lascaux, Dordogne, were discovered by accident by four boys and a dog in 1940.

The original caves, which date from between 18,000 and 15,000BC, are closed to the public, but a new replica, Lascaux IV was opened in 2016. One of the most famous chambers is the Salle des Taureaux.

They arrived around 50BC and changed the way of life for the local population. They left many structures, including the theatre at Orange.

In the fifth century, Clovis brought together the different tribes made up of people known as the Francs and is regarded as the first French king. He was a Christian.

A real heroine for the French is the young peasant girl who led the troops against the English during the Hundred Years War.

She was 19 when she was burned at the stake, and is remembered for the bravery she showed in the service of her country.

He is best remembered for the Edit de Nantes in 1598 when he gave the protestants the right to practise their religion, following nearly 40 years of religious wars.

France’s equivalent to Shakespeare. President Macron is a fan, and once recited the beginning of Le Misanthrope at the start of a TV show on Canal+.

Molière’s plays are still performed at the Comédie-Française more often than any other playwright. L’Avare, Tartuffe, Le Bourgeois Gentilhomme and Le Malade Imaginaire are some of his best-known works.

He demonstrated he was a true man of the theatre when he insisted the show had to go on after he collapsed during Le Malade Imaginaire. He finished the show – but died hours later.

The suspicion that it is bad luck for actors to wear green is said to come from the fact that he was wearing this colour at the time of his death.

It can be confusing to remember which Louis was which.

Louis XIV was the Sun King, le roi soleil, who enjoyed Molière’s plays and began building Versailles. His was an absolute monarchy with power centralised in Paris.

His successor was his great grandson, Louis XV, who reigned for nearly 59 years and was the only king to be born and to die at Versailles. He had many mistresses, the most famous being Madame de Pompadour. Many historians agree that in terms of culture and art, France reached a high point during his reign. However, he left an unstable government and a weak treasury after excessive spending on war and the royal court.

He was succeeded by his grandson, Louis XVI, who was married to Marie-Antoinette and was on the throne during the Revolution in 1789. At first, he went along with the revolutionaries and in 1791 he became a constitutional monarch.

At the same time, he attempted to flee Paris, then royalist armies formed and started fighting to restore the monarchy. This led to the imprisonment of Louis XVI and he was executed in 1793.

Leading up to the Revolution was the period when the great philosophers, Rousseau, Voltaire and Diderot, wrote about tolerance and freedom of thought.

1789 saw the storming of the Bastille and the Déclaration des Droits de l’Homme et du Citoyen, which are written up in the livret. The first Republic was declared in 1792.

This was a turbulent century in France and a settled republic as we know today was not established until the beginning of the Third Republic in 1875.

The First Republic lasted until 1804 when Napoleon I became emperor.

His entry in the livret reminds us that he governed France for nearly 15 years, was involved in several wars in Europe, and introduced the Code civil, the written civil laws by which France is governed.

It is constantly being updated, but it remains the cornerstone of French law. There are other codes, such as the Code pénal for criminal law and the Code de travail for work. It differs from the UK and English-speaking countries where the system is based on common law which evolves over the centuries and is largely based on precedent and consensus.

It is useful, perhaps, to know the sequence of events in this century.

After Napoleon I came the Restoration period, when France was once again governed by kings.

The July Revolution in 1830 deposed Charles X, and brought another monarch to the throne: Louis-Philippe, cousin of Louis XVI.

He really was the last king of France and was replaced by Napoleon I’s nephew, Napoleon III, after yet another Revolution in 1848.

Napoleon I’s son had been declared successor as Napoleon II, but died before he could take power.

Napoleon III was the country’s first elected president during the short-lived Second Republic, but when the constitution did not allow his re-election, he seized power and became instead France’s second emperor.

His regime collapsed during the Franco-Prussian War and so began the Third Republic. It is from its beginning in 1875 that the Republican system at last settled down.

Victor Hugo, 1802-1885, is regarded as one of the greatest French writers and a noted campaigner against social injustice and advocate for the end of the death penalty.

Les Misérables and Notre-Dame de Paris, the Hunchback of Notre Dame, are his most famous novels.

The 1830s saw the beginning of the French Empire and 1848 marked the end of slavery.

The Fifth Republic was established by Charles de Gaulle. He became its first president under the constitution of the Fifth Republic on October 4, 1958. He is also recognised as the man who spearheaded the liberation of France.

Other important dates are:

Those of the two world wars and their armistice days, and those of the Vichy Régime 1940-1944 headed by Maréchal Pétain and described as anti-democratic and a Nazi collaboration.

1957 – the Treaty of Rome and the beginning of the European common market.

May 1968 – the social movement started by students and spreading to workers.

Famous people with foreign roots have adopted French nationality include:

French citizens are also European citizens, and elections for Euro MPs are held every five years.

France is the fifth world power.

Sectors of excellence include luxury goods and aeronautics. France is the top tourist destination in the world. The Eiffel Tower was built for the Universal Exhibition in 1889 and has seven million visitors a year.

Mont Saint-Michel is another important site.

Mont Blanc is the highest mountain. The five main rivers are the Loire (the longest), the Seine, the Garonne, the Rhône and the Rhine.

You can find the citizen’s handbook by typing livret du citoyen in “search” at immigration.interieur.gouv.fr.