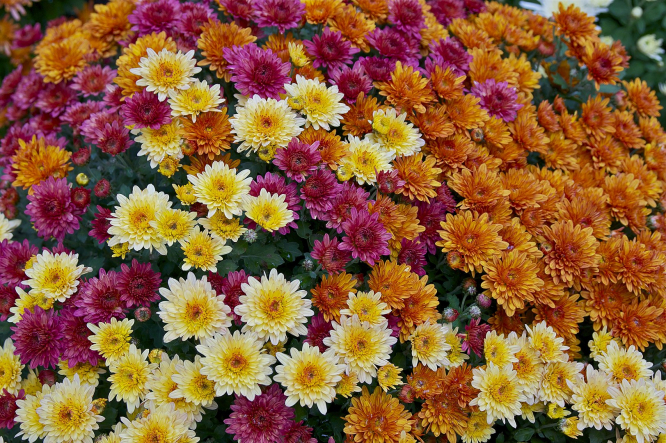 More than 25 million pots of chrysanthemums are sold in France every year, many of them around Toussaint - with florists estimating that the variety makes up 15-20% of business at this time of year as families attend the graves of loved ones, though figures are falling.

Toussaint (All Saints' Day) on November 1 is a public holiday in France. The festival of the 'faithful dead' on November 2 is also a popular day for chrysanthemum sales. The flowers are also likely to be seen later in the month for Armistice Day, on November 11.

The number of people visiting graves in France is falling, however. According to the latest "Les Français et les obsèques" study, conducted by the Chambre syndicale nationale de l'art funéraire (CSNAF), in partnership with the Crédoc, 38% of 18-39 year-olds tend not to go to a cemetery, preferring to share memories on social media. Of those, 14% said they had never visited a loved one's grave, while 23% said they only went occasionally.

In 2007, 45% of people questioned for the survey said they routinely visited cemeteries on November 1, compared to 39% in 2014. The study said increased social mobility meant people lived further apart, so were less inclined to make longer journeys, along with the number of cremations, which now represent more than 35% of funerals, had contributed to the decline in traditional Toussaint cemetery visits.

But the plant's traditional association with graves is the main reason why it is not advised to buy a the blooms when visiting a friend or someone’s house in France.

It is, however, not as old as one may think. It began in France in 1919, during the first ever celebration of the 1918 armistice and replaced an older French tradition of decorating graves with candles.

Then-President Raymond Poincaré and Prime Minister Georges Clemenceau ordered that all graves in France be decorated with flowers. Not many flowers are still in bloom at this time of year, but chrysanthemums are still flowering in autumn, and come in several varieties.

As a result, they were used to honour the First World War dead on November 11. Since then, the tradition has spread, and now begins with Toussaint on November 1.