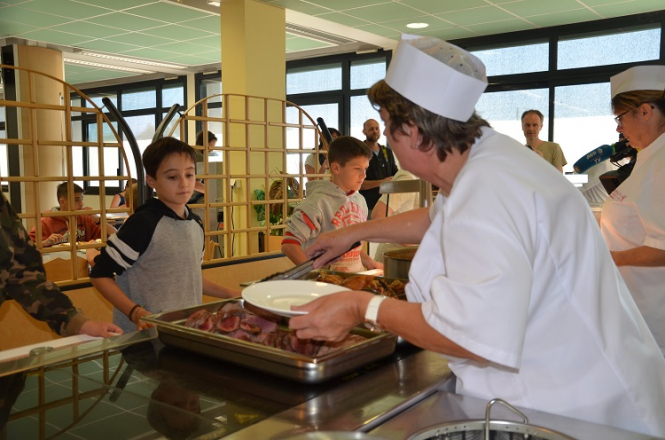 Pupils eating in the canteen at the Collège Pierre-Fanlac at Belvès, Dordogne, where all the food served is 100% organic
By Jane Hanks

School is a good place for children to eat and meals are improving all the time, according to an official report.

What’s more, school canteens help children discover a varied and healthy way to eat in a social context, and pupils may even take home important culinary lessons to their family, the Institut National de la Consommation concluded in its study.

At least half of all children eat in the school canteen. Rather than coming home with tales of “yukky school dinners”, that many of us might remember, most children look forward to lunchtime.

From November 1, all schools must serve one fully vegetarian meal a week as part of a two-year experiment to see what impact it will have on food waste, cost and take-up of school meals.

This measure was introduced in the October 2018 EGalim law on agriculture and food, which gave public authorities a year to introduce the change.

In Rouen, Normandy, all primary schools have offered a daily “meal without meat” since the beginning of this school year following an experimental period last year in seven schools.

Officials say changes in society mean many children eat less meat at home and choose to do the same at school, meaning that meat they are served ends up in the bin.

The meals are not vegetarian because fish will sometimes replace meat, alongside eggs, cheese and pulses.

Rouen is exceptional, however, and the school parents’ association, FCPE, together with Greenpeace and Végécantines, which campaigns for vegetarian meals in canteens, are concerned the new law does not have the backing of all local authorities and will not be introduced nationwide.

They have asked the government for adequate canteen staff training and say it is what parents want, particularly as climate change demands we eat less meat.

By January 1, 2022, organic produce should make up 20% of school food, the government has said. In the Dordogne, one school is ahead of the game, having become 100% bio already – and the cost of meals for parents has not changed.

Collège Pierre-Fanlac at Belvès has been awarded an Ecocert label, guaranteeing 100% organic food, excellent quality, local produce as far as possible, low food waste and non-polluting cleaning products in the kitchens and school.

On the day I visited, pupils were eating locally grown melon, roast beef from a local farmer served with creamed spinach or peas, and a choice of chocolate mousse or clafoutis with local plums for pudding.

Eva Geoffrey and Manon Piquot, both 12, told me the new menus tasted better than before and Raphaël Brouqui-Florenty, 11, said the food he eats at home now tastes “artificial”. “Here, it is much better.”

It has been a team effort involving backing from the Dordogne department – for whom providing local, organic food, available for everyone and not just the better-off, is one of its political aims – willingness from the chefs to learn new ways of cooking, and the support of the headmaster.

They have had to try out new recipes to learn how to incorporate more pulses into their menus and to encourage children to eat food they might otherwise reject.

As department president Germinal Peiro said, when praising the kitchen staff for their efforts: “You need a lot of imagination to get children to eat Swiss chard.”

They have introduced techniques such as cooking at low temperatures to preserve nutritional values and the school has purchased a juice extractor, to turn less attractive-looking fruits into delicious drinks.

Head chef Alain Desseix, who has been in the job for 25 years, said it gives him much more satisfaction to work in this way.

Headmaster Jérôme Péméja said the challenge was always going to be cost, but they have managed to reduce the initial price of €2.40 per organic meal to €1.90, which makes the cost only 10 centimes more than a non-organic school meal.

This year the department has given them €10,000 to subsidise this difference, and Mr Péméja says he hopes that they will be able to reduce costs further so a subsidy will not be necessary next year.

It is a small school in a rural area, with around 350 pupils near established organic farmers, making it easier for this collège than for others.

Mr Peiro said he hopes eventually to be able to offer meals like this to all pupils in the department.

Another collège, at Montpon in the same department, which serves 1,000 meals a day, is close to becoming the second 100% organic school in France.

While not all schools can boast the same quality, school dinners in France have always had a good reputation, as eating well is an established part of the culture.

It still has one of the longest meal breaks. In his film Where to Invade Next, US documentary-maker Michael Moore toured Europe to take back the best elements of his country to the US, and school dinners were his choice in France.

He was amazed that in the school he visited in Normandy, chips were only on the menu a few times a year, there were four courses, dozens of types of cheese were in the chef’s fridge, and the school cooks regularly get together with a dietician and the local mairie to plan meals.

As he said: “Lunchtime isn’t just 20 minutes where you have to stuff your face as fast as you can. They consider lunch a class, a full hour where you learn how to eat in a civilised manner, enjoy healthy food and, yes, drink lots of water.”

Although food is getting the thumbs-up in schools, it is still better-off families that are benefiting the most.

A 2017 report by the official education watchdog Cnesco found that in priority education areas, fewer families sign up for the canteen.

For collège, they said 41% of pupils ate in school, compared to 71% in other areas.

They say this is a problem because studies show that a good lunch improves performance in class and well-balanced meals in the canteen reduce the risk of obesity.

Meal prices are set by local authorities and vary across the country. Communes are responsible in primary schools, departments for collèges, and regions for lycées.

In the Dordogne, for example, collège meals cost the parents €2.40 – €1.80 of which covers the cost of the food and the rest is a contribution towards paying canteen staff and running the kitchens.

However, the Cnesco report found that, in 2017, the average price for a meal was €3.30 in collèges and lycées, and often there were no lower tariffs for poor families.

For children with allergies, a PAI – projet d’accueil individualisé – can be set up at the request of the parents or on the initiative of the school, with the agreement of parents.

A protocol will be set up to deal with each child’s needs by the school doctor or nurse, the child’s doctor and the school.

In the canteen, it could mean that an alternative meal will be offered, if required, or the parents might be given permission to send their child to school with their own meal.

If necessary, it will give staff the right to use an adrenaline pen if there is an allergic reaction, when normally teachers are not allowed to give medicine. If the allergy is very serious and can be provoked by odours alone, the advice may be to avoid the canteen.

Government figures show that asthma and allergies form 63% of PAIs, followed by diabetes and epilepsy.