Schools not in tune with music plea 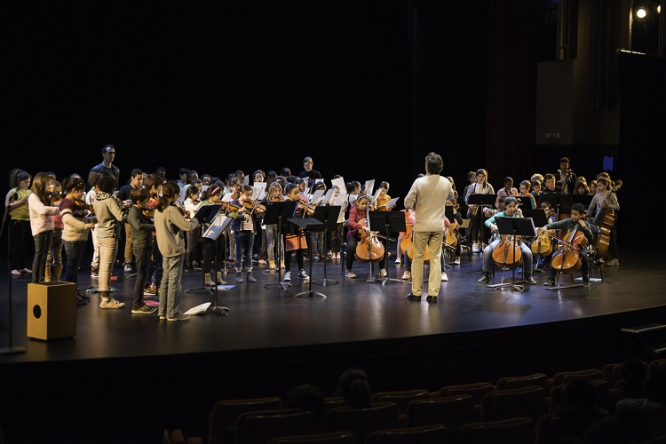 There is no tradition of school orchestras (as in the UK) and the options to learn a musical instrument nearly all come from outside the classroom and include conservatoires, private music schools, private teachers and a few secondary schools with specialist classes, linked to conservatoires.

In teaching, there is a great emphasis on the need for separate music theory lessons, particularly in the conservatoires, and it is possible to do the UK Associated Board of the Royal Schools of Music exams.

The 400 conservatoires have more than 800,000 pupils and their teaching and exams are recognised at national level.

They are public and state-aided, although they have had budget cuts in recent years.

Around 150 have a Classes à Horaires Am­én­agés CHAMusic or CMADanse section, where students in a linked collège or lycée have class-time lessons at the conservatory.

Prices vary widely, and also depend on whether your commune funds a conservatoire, which is one of their budget choices. In the Dordogne, the departmental conservatoire price for a child learning an instrument or singing with theory and orchestra is €372 in 2017/2018 if your commune is paying into it, or €774 if not.

Conservatoires offer more than just learning an instrument and theory, students can learn to sing or play in orchestras. There are three cycles with exams at the end of each.The first cycle averaging four years with 2-4 hours tuition a week, including at least 30 minutes of individual instrument tuition. The second lasts 3-5 years with 4-7 hours of tuition a week and a minimum 45 minutes individual instrument.

Pupils can decide whether to study for a final exam or not in the third cycle, which is flexible with the number of hours based on the syllabus chosen.

Private music schools do not have a rigid structure or exam system and a number set up an umbrella group, Féd­ération Nat­ionale des Ecoles d’Influence Jazz et Des Mus­iques Ac­tuelles (Fneijma), which tends towards modern music.

The many private teachers will teach an instrument without music theory, so it will take up less time but is less likely to enable the pupil to play with others. The union minimum is €29.96/hour but teachers often charge less. Find details of teachers in schools, mairies, shops and on the internet.

Another option is a teacher to work towards the Associated Board of the Royal Schools of Music (tinyurl.com/ya8letvu), the world’s leading provider of graded exams and assessments.

Around 2,000 pupils, French and British, take the exams in France each year.

Three representatives cover France to advise on what to do. It can be done in parallel with the French system.

Dr Atarah Ben-Tovim, a flute player in Dor­dogne known for her BBC TV appearances (atarahflute@wanadoo.fr), was responsible for bringing the Board exams to France. “I am fanatical about training young people and I was surprised by the conservatoire standards.

“The advantages of the Board are that it gives a really good musical grounding for anyone who wants to learn as an amateur or as a professional. It is hard work at the start but well worth it and your exams are recognised in the UK and anywhere in the world.

“Grade 4 is accepted as extra marks for GCSE, and Grade 6 upwards as extra points for university entrance in the UK.

“I have had 16 students in the last five years whose Grades 6 to 8 on various instruments or singing, helped them get to the university of their choice, or UK music scholarships; worth all the work and investment!”

The exams are not competitive: “You work at your own pace and take them when ready. There are 9 grades from the first preparatory test at 6 or 7, and later four professional exams. There is a network of teachers of many different instruments plus singing all over the country and we can put you in touch with them.

“You may pay on average €22 a lesson with exam fees from €50 and up to €300 for professional diplomas. Exams are held in France in eight centres.

“There are exams in all levels of music theory and apps etc are available via the internet, making it far more accessible.”

If a student has been learning the French system where the notes are called Do, Ré, Mi etc instead of C,D, E etc they can use this system in the exam.