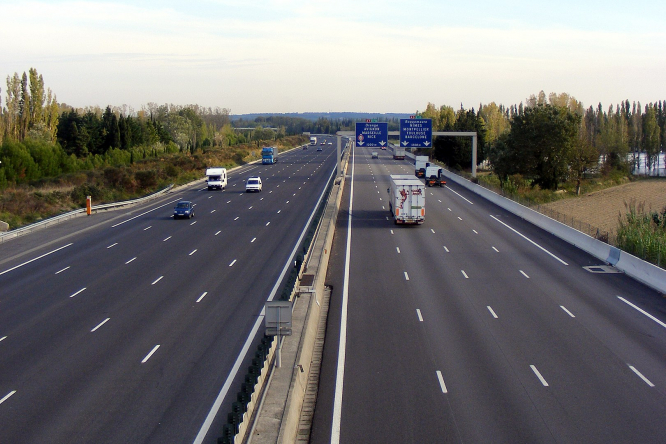 The A7 autoroute
By Brian McCulloch

Traffic control cameras on the A7 autoroute not far from the village of Albon, Drôme, show the vehicle travelling at high speed with flames coming from under its bonnet as the driver headed for the emergency stop lane.

He then lost control of the vehicle, which flipped over the security rails, and rolled over several times before coming to rest, still burning, in a field.

There were nine people in the seven-seat vehicle, and five of them, aged between three and 14 died at the scene.

The four others, three adults and a seven year old, were taken to hospital suffering from severe burns and other injuries.

The driver told emergency crews that the motor accelerated uncontrollably, and the brakes did not work.

The family, from near Lyon, was heading south on holiday. A judicial enquiry into the accident has been opened.

The accident was due to a problem with the turbocharger on the 2005 Renault Grand Scenic diesel, the public prosecutor in charge of investigating it said. Renault had known problems with the turbos fitted to diesel motors from the end of the 1990s to around 2010.

Problems with the older engines are usually due to oil used to lubricate the turbocharger getting into the motor.

Turbochargers work by having exhaust gasses drive a fan or turbine, linked to another turbine which compresses fresh air used to burn fuel.

The compressed air allows a greater quantity of fuel to be burnt, giving more power.

For manufacturers the advantage is that it allows them to use smaller and lighter engines in vehicles which give the same power as larger, non-turbo motors.

Turbochargers also often improve fuel economy because most of the extra air and fuel is only injected into the engine when it is at high revs, giving the fuel economy of a smaller engine at lower revs.

The problems with the Renault turbines have mainly been due to seals failing on the oil supply system, allowing oil to be sprayed into the compressor side.

Renault has always said that most turbo problems are caused by people not following maintenance instructions, especially concerning the frequency of oil changes and the quality of oil used.

Signs of a developing turbo problem on a car include:

Most new cars, both diesel and petrol, are now fitted with turbos and basic tips to extend their life include letting the engine get up to temperature by driving gently before accelerating hard.

Similarly, allow the turbo to slow down and cool down before switching off the engine, by allowing the motor to idle for at least 10 seconds before you switch it off.

This allows oil to continue to circulate and take heat away from the turbo unit, and stops substances from the exhaust and air baking into the very hot turbine blades.

The contrôle technique will only signal a problem with a turbo if smoke from oil getting in the engine is registered at high levels in the exhaust, so having a clear control technique does not mean there is no problem.

If you suspect a problem go to a good garage.

Most of the time, if there is an issue with a turbo, the whole unit needs to be replaced at a price of between €1,500 and €2,000. Most are included in two year new car guarantees, or five year extended guarantees.

Occasionally a garage will be prepared to take a turbo unit apart and clean it or replace individual parts in it, which can solve problems, but this is likely to cost at least €700 in labour alone, and there is no guarantee they will be able to find the issue.