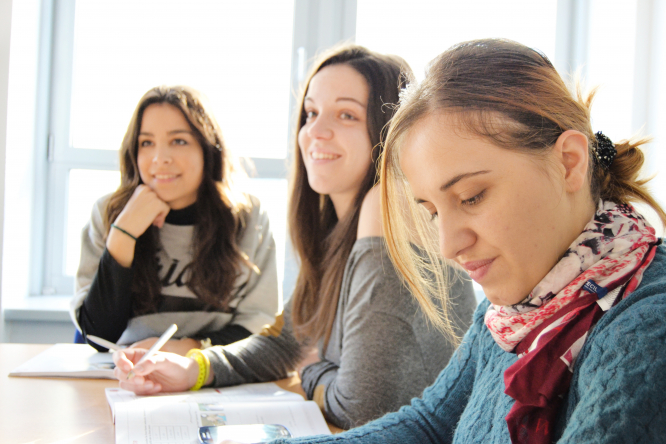 English pupils often keep their heads down in English lessons to avoid being singled out, for fear of ‘showing off’ or through boredom
By Clara Villanueva

“Don’t worry, she’ll soon pick up French,” the village teacher reassured me when I called her from London before we moved our 10-year-old daughter to France.

As it turned out, the issue wasn’t her French but her English.

I’m Spanish and my kids are trilingual so I thought English would be an easy ride for them. I couldn’t have been more wrong.

“How come you’ve only got 16 [out of 20] in English?” I asked my daughter when she brought home her school report. I was surprised and disappointed that she wasn’t top of the class.

How did her teacher, who was incapable of pronouncing the letter H, dare mark down my daughter who had a much better accent than her?

“She hates me because once I tried to correct her pronunciation and she told me off.”

Filled with maternal rage, I went to see the teacher. As it turned out, things were not as simple as that.

“She doesn’t participate, so I couldn’t give her a higher mark,” the teacher said.

“She keeps her head down and never volunteers any answers. I have to get everything out of her.”

My daughter confessed that it was true. She did not speak in class because she didn’t want to be singled out by the other children.

She didn’t want them to know that she wasn’t French and didn’t want to show off. On top of that, she got bored during the lessons.

“But that’s not all,” the teacher added. “Her grammar isn’t great, her written English is insufficient and she did badly in an exam on irregular verbs.”

I left the teacher’s office with my tail between my legs.

I should have known better. I am a language teacher, as well as a parent, so I see the problem from both directions.

When I talked to my friends, I found they had similar experiences. I discovered English-speaking kids and their teachers face a variety of issues – which can be solved if parents, pupils and educators understand each other’s point of view.

In the majority of cases, foreign language teachers in the French education system are not native speakers. They tend to take one of two attitudes towards English-speaking kids: either they perceive them as a threat to their self-esteem or as an opportunity.

Kate Coulson, a yoga teacher and mother of two, said: “There was one teacher, when my son started collège, who seemed to resent the fact that he could speak English better than her.

“She seemed to enjoy singling him out if he got something wrong. She was about to retire and spoke very old-fashioned English, always quoting the Oxford English Dictionary.”

If you get a teacher like this, there is not much you can do, but you don’t lose anything by reassuring them that you respect their authority and won’t contradict their judgment. The other approach for a teacher is to see a foreign child in class as an asset and a welcome challenge.

Ms Coulson is well aware of the difference: “My children now have a young female English teacher who trained in the UK, and it is completely different.

“She is really pleased to have them in the class and uses them actively so they don’t get bored.”

When we first arrived in France, our local primary school teacher got our daughter to help the other children with their English.

She recognised that my daughter’s accent was better than hers and “used” her in a fun way, with games and role play exercises to help the class. She also took it as an opportunity to improve her English.

I do something similar in reverse. French is not my first language and in class I find it helps to admit my vulnerability rather than hide it.

When I lack a word in French, or I don’t know how to pronounce something, I ask my students, and thank them for helping me. I never feel I am giving up my authority and my pupils feel useful and valued.

Lindsey Heredero’s children are English and Spanish, like mine, so I went to her for advice.

She said: “My son solved the problem by choosing German as his first language and Spanish as his second. He only switched back to English at secondary school when he needed the marks.”

Being able to speak more than one language is a boon in adult life but we should not forget that for an infant or adolescent it may seem like an imposition rather than a gift.

Does your family have experience of this situation? Tell us about it at news@connexionfrance.com