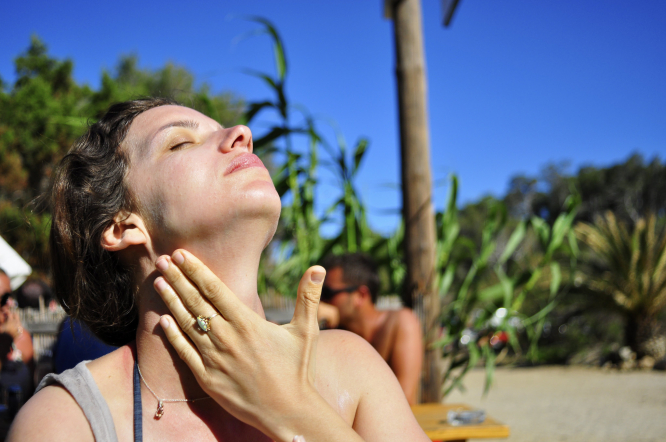 Some sunscreens contain an ingredient that turns carcinogenic over time Pic: Amir Illusion / CC BY 2.0

Some popular sunscreens and day creams available in France develop a carcinogenic component as they age, researchers have warned in a respected US scientific journal.

They have called for a common organic compound used in the creams' manufacture to be banned.

Researchers at the Centre national de la recherche scientifique (CNRS) and Sorbonne University deliberately aged several well-known creams. They discovered that the octocrylene compound, used to protect skin from the effects of the sun, turns into benzophenone over time - an endocrine disruptor that can pass through the skin and interferes with the body's hormonal systems.

In some cases the concentration of benzophenone in creams, from well-known brands such as Garnier, Uriage, Bioderma, La Roche Posay, Cosmi and L'Oréal, exceeded 10 mg / kg just a year after first use, the scientists found.

"When it is on the skin, benzophenone can induce dermatitis," Dr Didier Stien, one of the authors of the study published in the peer-reviewed journal Chemical Research in Toxicology, told Franceinfo. "It can cause cancer, especially liver cancer.

"It is a molecule that affects thyroid function and disrupts the development of reproductive organs."

It is the first time such a link has been discovered. "To our knowledge in the scientific literature and in general, no one [before this study] had demonstrated that octocrylene degrades into benzophenone," the study's authors said.

"It's important to alert both the manufacturers of these molecules and at the same time to alert consumers that products that contain octocrylene are potentially dangerous.

"Products that contain benzophenone and octocrylene should be banned."

Are we allowed to leave our caravan parked on our land in France?
2 June 2021
More from Health
More from Connexion
Get news, views and information from France
Join the newsletter
Subscribe to The Connexion