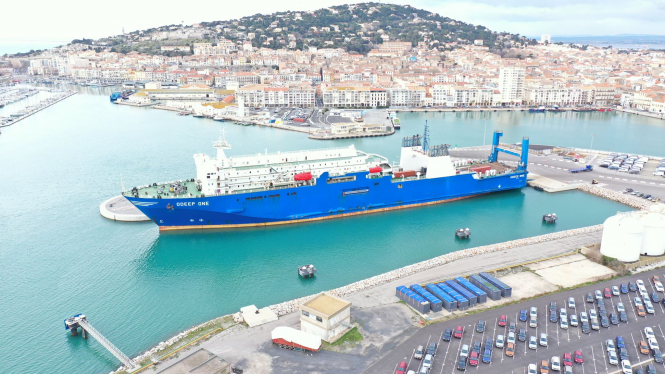 A former Russian ferry has been refitted as a mobile bottling plant to supply deep-sourced seawater to the Asian health tonic market.

The ship sucks up seawater from a depth of 300 metres off the French Mediterranean coast.

The water, branded Odeep and sold in 600ml bottles, is proving popular as a health drink in Asia, with most of its sales in Japan and China.

Sales are growing in France, too, with the water increasingly found in specialist wine caves and high-end grocers.

Captain Régis Revilliod, who started drinking seawater 10 years ago and has since been working to industrialise the process, said: “The taste is slightly of iodine but not salty, there is nothing else you can compare it to.

“Almost all the sodium chloride is taken out through a process of filtration which allows other minerals to pass through.

“There are 78 of them and they are in a form where the uptake by the human body is optimal and that is why it has been so successful in Asia, where seawater has long been seen as healthy. ”

Water taken from 300 metres has few of the bacteria and marine organisms found in seawater nearer the surface.

Once it reaches the ship, called ODeepOne, it passes through the filter process before being bottled, with an on-board bottling plant making recyclable PET bottles using stocks of granules and pre-forms. The first commercial voyages, before the coronavirus lockdown blocked the ship at its base, at the Mediterranean port of Sète, saw it reach its target of producing 600 one-tonne pallets in five days.

The remaining two days were given over to the transport and distribution of the water.

“In normal times, the ODeepOne will sail to Asian waters, where it will be able to produce closer to our main target markets,” said Captain Revilliod.

“The idea is that we will then hire other ships and fit them with the technology to meet demand.”

ODeepOne used to be a Russian train and car passenger ferry in the Baltic, and was built in what was then East Germany. It flies a Panamanian flag and has French officers and a crew from mainly West African nations, with 45 people on board.

French legislation means that desalinated seawater cannot be labelled mineral water. Instead, it is sold simply as a boisson.

In France, a 600ml bottle sells for €1.40. Captain Revilliod has steered the company through three rounds of fundraising.

Last December, he launched a fourth round, hoping to raise €20million on the basis of a company valuation of €210million.

“Things were going well, but then the coronavirus hit, first in China and then here in France,” he said.

“I am not Nostradamus so I can’t tell what will happen – but I know there is a market for our drink, which many see as a great health boost.”