Are wills drawn up by English law firms legal in France and, if so, must they be written in French?

As long as your UK will is made in the correct form, ie. in writing, and signed in the presence of two adult witnesses, who also sign it in your presence, it will be valid in France.

There is no requirement for the will to be drafted in French.

In fact, it can be advisable to write the will in your native language to avoid any risk of future challenge on the basis that you did not understand what you were writing. If the English will is then applied in France, a French notaire will ask for a certified translation.

A word of caution: a poorly drafted, yet valid, English will can have disastrous consequences in France. Without knowledge of French law, the drafter could prepare a UK will containing provisions deemed to conflict with French public interest rules and therefore be disregarded by the notaire with regard to French assets.

In addition, there could be a significant inheritance tax liability in France if anyone other than your beneficiaries or a third party, such as an English law firm, are named executors. Also, UK trust provisions are not readily recognised in France and it is not advisable to set up trusts for your French estate.

French will without assets

We have a simple French will. If we sell our French second home, as we plan to do one day, does it automatically become null and void, or must we do something?

This is hard to answer without seeing the exact wording of your French wills, but, if the wills refer specifically to your property in France or assets which are subject to French inheritance law, then they would become irrelevant if there is no such asset.

Please bear in mind the need to have legal capacity in order to sell. If you do not already have UK lasting powers of attorney in place, these would be valid for the French sale, were either of you to lose mental capacity.

My sister and I have lived for over 10 years in France in our house. It is in both our names but not en tontine. When either of us dies, will the other have to pay full tax as a sister or pay a reduced rate like married couples?

There is indeed a provision in France from which you may benefit provided you fulfil three criteria.

You and your sister must have lived together for at least the last five years up to the death of the first of you, you must both be aged over 50, and both be unmarried, divorced or widowed.

If all conditions are met, there will be no inheritance tax payable on the assets passing between you.

This is in contrast to the usual position for siblings, where only the first €15,932 passes tax-free, with tax of 35% then applying up to assets valued at €24,430 and 45% on the remaining value of assets passing between you.

We recommend you both consider making a will to confirm you would each like all of your assets to pass to your surviving sister.

Having recently made my British will, must I now make a will in France for a property there which we use as a holiday home?

On your death, a French notaire will be appointed to deal with the formalities in respect of your holiday home in France. The notaire will search for any valid will.

If your British will is worded to govern the whole of your estate, the notaire will apply its provisions to the French property.

This may have undesirable tax consequences, as French inheritance tax will always apply.

For instance, the appointment of third-party executors or trust provisions in a British will should be avoided for French tax reasons.

It is advised that you consider a separate will to govern the inheritance of your French property.

You would need to review your British will to exclude the French property so they do not inadvertently revoke/contradict one another.

French law specialists who can examine your existing British will and advise from both a French legal and French tax perspective can help.

Our thanks to Matthew Cameron, Ashtons Legal,
Barbara Heslop and Fabienne Atkin,
Ashtons Legal trading as Heslop & Platt,
for answering these extra questions from Connexion readers 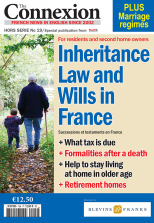 Inheritance Law and Wills in France*
Featured Help Guide
Get to know the formalities around French succession rules and considerations for buying property.

Owning a Second Home in France*
More from Money
More from Connexion
Get news, views and information from France
Join the newsletter
Subscribe to The Connexion