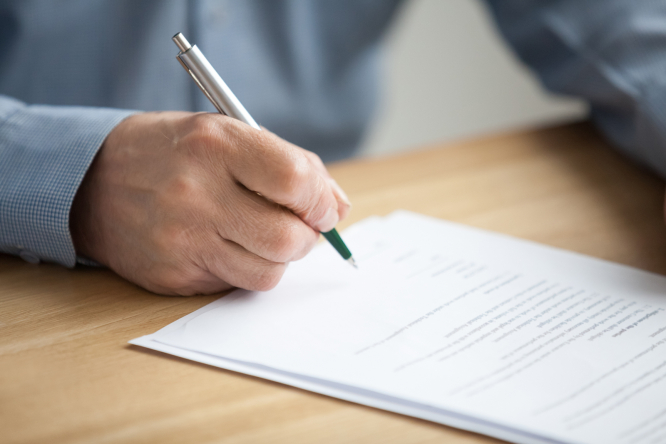 Franco-British honorary avocat Gérard Barron believes the new article 'will not survive a challenge in the European Court of Justice' Pic: fizkes / Shutterstock

Currently, many people with non-French nationality make use of an EU succession regulation to choose the legal system of another country they are affiliated with to cover their worldwide estate on death.

The regulation contains a default rule that where no choice of law is made, the system of the country where the person was living applies.

This meant, for example, Britons living in France could use UK rules to leave their estate to whom they wished, as opposed to the obligatory French rule of half to a single child or one-third each to two.

Britons in the UK with a French holiday home, for example, could also assume that French rules would not apply to it.

However, this is now in question due to a law, applicable to inheritances settled from November, which says children who do not receive what French rules would entitle them to may ask to be compensated out of any French-based property.

It applies where the testator lived in France or was an EU citizen, or where either applies to one of their children.

Franco-British honorary avocat Gérard Barron, from Boulogne-sur-Mer, said the law was “a very worrying development” as it meant people were at risk of having their wishes ignored or overturned in the courts where ‘disinherited’ heirs choose to challenge their will.

What is more, the law says notaires have to inform them, meaning “a flood of litigation seems inevitable”. He said the new rule was intended to help protect Muslim daughters, who might get less than brothers under Sharia law, but “the effect goes well beyond such intents and flies in the face of the EU regulation”.

He said he was surprised it was allowed by France’s Conseil Constitutionnel, as the Constitution places international rules such as EU law above French ones, and does not usually allow them to be bypassed.

“I believe the new article will not survive a challenge in the European Court of Justice,” he said.

“In the meantime, the problem for testators with wills at risk of challenge by ‘disinherited’ descendants is that it will not be attractive for their designated beneficiaries to have to fund the litigation necessary to get the ECJ to rule against France.”

“It will create chaos until then, as notaires will have no choice but to apply it until such time as it is successfully challenged. The best advice one can give for the time being is ‘don’t die’.”

English-speaking notaire François Trémosa, of Trémosa, Leschelle & Associés in Ramonville-Saint-Agne, Haute-Garonne, agreed that the law was “dreadful” and “very surprising”.

“Since it has been approved by the Conseil, there will not be any more legal challenges in France. In many, many years, there might be an ECJ ruling, assuming the new law survives that long.”

However, he does not believe most British families in France will be affected. He said there was a similar law, abolished by the Conseil Constitutionnel in 2011, called droit de prélèvement, that was hardly ever used in reality – he has used it once in his career.

“I think it will be the same with the new version, although its scope is bigger, as the old one only protected French citizens.”

He said: “We expect we will be asked to review circumstances for clients to see if any action may be required and would hope to hear from anyone else who may wish to discuss specific circumstances.”

Certain provisions in French law already exist which can help protect against the réserve (forced heirs) rules – for example, to pass everything to a surviving spouse.

These include changing one’s marriage regime with a notaire to communauté universelle. Another mechanism is the pacte successoral, where heirs under French rules can agree to waive their rights.

The new rules will have no effect in cases where children respect their parents’ wishes and do not make use of them.

will
inheritance
More from Money
More from Connexion