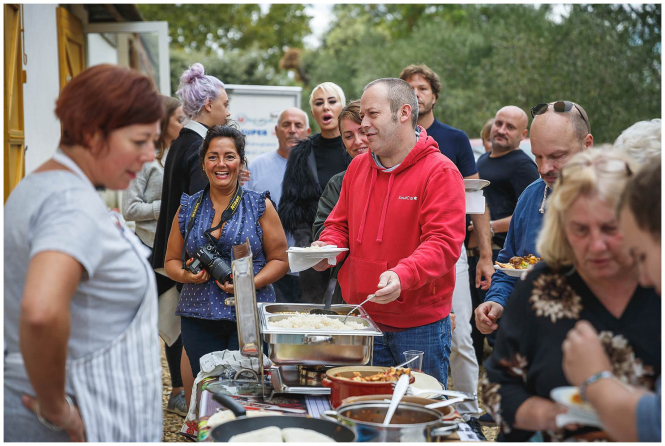 Covid-19 has cost Adele and Iain Swann, owners of Narbonne-based Chillis and Spice, two seasons of events
By Samantha David

Businesses have been hard hit by the Covid-19 pandemic, with bookings, events, catering, and musicians or theatre events cancelled.

Weddings, family reunions, community evenings and parties, from modest dinners to society celebrations, have all been scratched.

It has been a major blow for Connexion readers Adele and Iain Swann, who run Chillis and Spice, a catering business near Narbonne. To date, a birthday party, a curry night, a wedding, and Cancer Support France’s Spring Fayre have all been postponed.

The cancellation is a serious loss too for the cancer charity.

If it cannot be rescheduled, the loss of the event will be a massive financial blow for Sud-de-France CSF branch, which supports English speakers with cancer, as well as their families and carers.

It is a major fundraiser and president Lesley Wissen said: “We were expecting up to 500 people, and last year we made more than €3,000, which paid for our volunteers to be trained. We also run a curry by the lake in Homps each September, and a Christmas quiz, but the Spring Fayre is our major fundraising event.”

The proceeds help fund training for the active listeners who man the phone lines, but the fair also does the vital job of raising awareness.

“We don’t just need money, we want people to know we exist, so that if ever they find themselves dealing with cancer, they know where to go. We also raise awareness in order to recruit new volunteers.”

Cancelling the event was not an easy decision. “There really was no choice. We hung on and on, hoping that there would be some kind of miracle but we hadto accept finally that it just wasn’t going to happen. It is a shame, but we are staying positive. For the moment, the Fayre is only postponed.

“Spring is finite, however, so we might have to reclassify it as a Summer Fayre.”

They are not the only ones in the area affected. Val Slowther, president of Pépieux Loisirs, has had to cancel a curry and cabaret night for 120 people.

“We’ve been going for around 15 years in various guises, and we’ve been getting locals interested in curry for some time.

“People started coming along out of curiosity, and now they come because they love it.”

Now the plan has had to be cancelled or, hopefully, postponed as “Adele and Iain’s curry is excellent. We’re hoping to postpone it to September or October if we can book the hall, the singers and caterers again”.

The CSF and Pépieux Loisirs events are not the only ones Adele and Iain have lost. Adele said an anniversary meal for 35 has also been cancelled and they expect a large wedding in May to be cancelled too.

“The situation is drastic for us. We don’t know where our next penny is coming from.

“But since we started out selling spice packs for curries and went into catering by popular demand, I’ll be using the time to write a book of my Indian, Mexican and barbecue recipes.

“Customers have been asking for one for ages, and we’ll also still be selling spices online.”