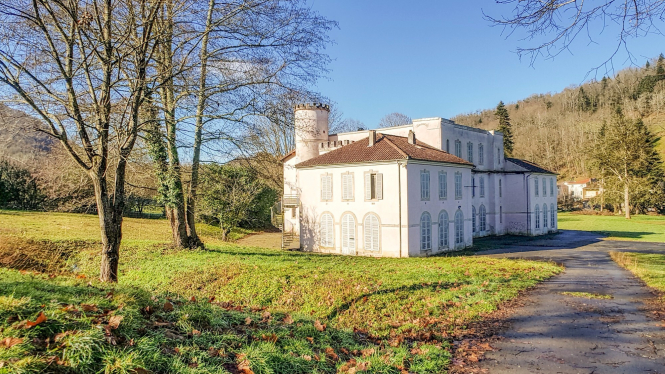 The Château de Nescus was once home to a holiday camp for children from Paris. Pic: Agorastore

An abandoned chateau that once served as a holiday camp for Parisian children has been sold at auction for €205,000.

Bids opened for the Château de Nescus, which is located close to the Spanish border in Ariège, on September 14, with a starting price of €90,000.

Read more: Abandoned French chateau to be sold by auction - starting at €90,000

The ensuing 11 bids saw this price more than double before the auction ended yesterday (September 16).

The chateau was first built in around 1700 for local nobles, before being destroyed by a fire in 1918.

It was later rebuilt after World War Two as a holiday colony (colonie de vacances) for children from Paris and fitted with large communal bathrooms, dormitories and kitchens.

After the City of Paris – which owns the building – shut down the holiday camp, vandals broke in and graffitied the interior walls.

Significant renovation work is required to return the chateau to a liveable state, but the building’s 1,400m² of space, adjoining caretaker’s cottage and 2.2 hectares of land present a range of possibilities for developers.

“I hope that it is not transformed into a nightclub,” joked Nescus’ Mayor Geneviève Amardeilh when the chateau was first put up for auction in June.

“A real project is needed to bring [this place] back to live.”

The chateau was sold through Agorastore, which specialises in selling buildings, vehicles and computers for local authorities.

French ‘RoboCrop’ pilot scheme could be solution for small-scale farms
15 October 2021
More from Property
More from Connexion
Get news, views and information from France
Join the newsletter
Subscribe to The Connexion