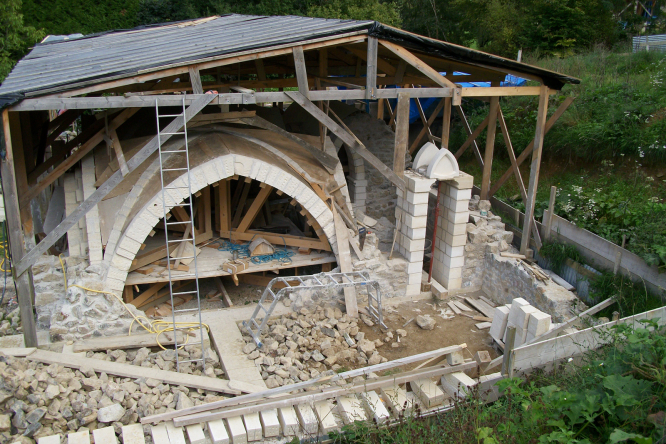 Donald Russell has been working on the project, grandly titled Opus Gothique and situated in Burgundy’s Morvan national park, since retiring from a career as a palaeontologist.

He arrived in France from the United States in 1956 to study for his doctorate, and then landed a job at the Jardin des Plantes in Paris.

He still lives just south of Paris, but spends two to three weeks a month working at Opus Gothique.

“He carves stone for eight hours a day, every day. He is incredibly dedicated,” his son Sam says.

Sam, 67, is equally invested in the project. A retired builder of schools in Vietnam, he has been living in Burgundy since 1986.

He says Donald wanted to stay physically and mentally active, so he took up stone-carving, and in 1992-94 drew up the plans for this project, incorporating all his carvings.

Donald carved a doorway for Sam’s house in 1996 as a feasibility study, and the success encouraged him to carry on.

For 14 years, he carved stones, stacking each one in his barn as it was finished. When he ran out of room, he started filling his son’s barn as well.

“So in 2008 we bought this place in Saint-Léger-de-Fougeret and spent another year getting planning permission,” says Sam, who is helping with the construction.

“It was hard because we are in a national park and planning permission is usually only requested for buildings like bungalows.

“Then my father started digging the foundations and, of course, he continued carving stones, all day, every day. By 2008, he had threequarters of them all carved.”

“Next we have to add about 50cm of rubble above the arches to stabilise and strengthen them. “It is a big deal, because it is the basis for the entire construction. We are expecting the ground floor to go faster, because the constraining buttresses are already in place and all the stones needed have been carved.” Like nearby Guédelon, where a team is constructing a fortified medieval castle using only contemporary techniques and tools, financing is key to keeping the project going.

Although labour comes from a constantly changing team of volunteers, raw materials are expensive and the Russells have formed an association which they encourage visitors to join.

“It’s only €20 a year, and that pays for volunteers’ food and other expenses,” says Sam.

Volunteers usually come for around a fortnight, although some stay longer, and a few return every year.

“It’s a wonderful atmosphere. About half the volunteers are French, and the other half are international. We have had people from 12 countries so far, including South Africa, Denmark, and an engineer from India. We work five days a week and at weekends I take people out to explore the local area.”

“You do not even need to be super-fit. Jobs available include masonry, stonecarving, making roof tiles, and joinery.

“Volunteers can also do administration, gardening or cooking. We are always open to new ideas, like a medieval knot garden or a kitchen garden. Whatever people want to contribute.”

It is possible to have guided tours of the site to see the progress being made and the Russells’ ultimate vision is to establish a museum in the building.

“We also plan to use it as a retreat for Gothic arts and crafts, a place where people can come for decades into the future, to make things including leaded glass windows, ceramics, woodwork, stone-carving, anything,” says Sam.

The project is essentially eco-friendly. Sam, Donald and the volunteers use only hand tools, natural materials and reclaimed rainwater. They recycle whenever possible, have a compost heap and use a dry toilet system. Sam says they are considering Gothic-style permaculture, and are open to any other similar ideas

The project is hoping to be completed within their lifetime

Both Donald and Sam would like to see the project finished in their lifetimes, and hope that by continuing to appeal for volunteers, they will be able to speed up progress.

“We can accommodate eight to nine volunteers in our barn dormitories,” says Sam. “There is one for men and another for women. Also, the mairie allows us to use a flat in the village which can sleep four to five people.”

Lodgings are free for volunteers, and the Russells also supply all the food. In the spirit of the project, that means sometimes one person volunteers to cook for everyone, and sometimes it is a group activity.

The experience of volunteering can be life-changing, says Sam, not least getting stuck into stonework, which he says can be “amazingly Zen”.

“There is a wonderful atmosphere here. I particularly love seeing women realising they can do this stuff and being energised by their achievements. I believe medieval women probably worked in construction alongside the men.

“We all have many skills these days but often do not know how to use our hands.

“When people who have never used a saw, or a shovel or a chisel learn those simple, basic skills, it gives them a new perspective on life.”

22 hours ago
4
Why are Covid cases in France still higher than in most of Europe?

1 day ago
5
Leading French scientist: variant of Omicron may cause new Covid wave

If I wear contact lenses to drive in France must I bring glasses too?
22 January 2022
More from Property
More from Connexion
Get news, views and information from France
Join the newsletter
Subscribe to The Connexion