'Covid showed us that city life in France has its drawbacks' 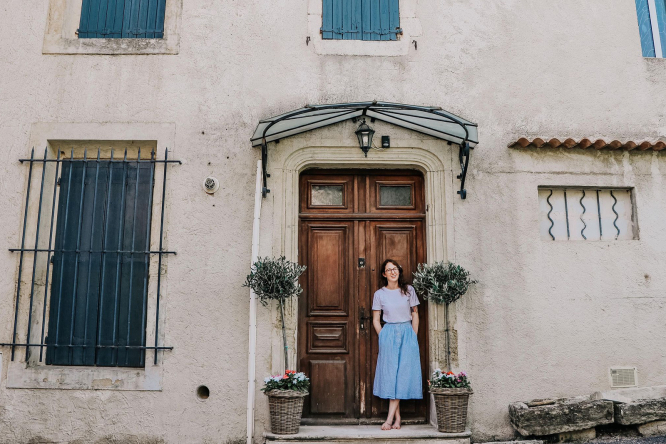 Cindy outside the village house she shares with Derek and the dogs Pic: Courtesy of Cindy Charles and Derek Haybittel

For Cindy Charles, 35, and partner Derek Haybittel, 38, a city apartment was not the dream after all.

The couple made the decision to relocate to France from Australia in 2019 so they could travel more widely.

“When you live in Australia, you have to take a month off just to travel anywhere, so it made sense to move,” says Cindy.

“I’m a life coach and have just set up to work specifically with expats, and Derek works remotely for a hospital in Tanzania, so we can both work anywhere.”

With little knowledge of the country, nor opportunity for visits, the couple narrowed down their search area by watching videos on YouTube

“We loved the look of Montpellier,” says Cindy, “so decided we would aim to live there. We came over in 2018 to check it out in person and it was just as cool as it had looked online, so we decided to go for it.” They made the move in May 2019, taking a month to explore France before returning to Montpellier to rent a flat near the railway station.

“We chose an apartment right in the heart of things,” says Cindy.

“It was not as tiny as some other flats we looked at, and it did not matter that it had no outdoor space – we were pretty much out all the time.”

The flat, with its modest decor and sparse kitchen, was an ideal base for the young couple, who spent most of their time enjoying city life – but when the world came to an abrupt halt in March 2020, the disadvantages of apartment living became apparent.

“When the first lockdown came, we were stuck in our apartment with no outdoor space. We have two labradoodle dogs, Chester and Sadie, so it was a real challenge,” says Cindy.

There were other problems with the rental too. “We found out there was lead in the water, and our neighbour’s bathroom leaked into our property.”

In August 2020, the couple decided to search for a more appropriate home. This time they opted to buy, so they would have more control over the property. Space was also a priority. Despite their initial reluctance to move out of the city, they found several more rural properties on the internet that looked ideal, eventually falling in love with a village house in nearby Gallargues-le-Montueux.

“It had 170m² of living space, including three bedrooms and an office, as well as a courtyard garden and terrace,” says Cindy.

The property was also affordable, meaning the couple could use existing savings, rather than get a mortgage.

“The transaction only took six weeks. We had an amazing estate agent and notaire – and the seller was keen to get everything sorted, so we worked together to get it done quickly,” says Cindy.

Despite loving their new house, the couple admit they had a few lingering doubts about the location when they moved in March this year.

“Initially, we wondered whether we had made a huge mistake,” says Cindy.

“It was the third lockdown, so the village was completely closed down. There was no one about. It confirmed all our worst fears about living in a smaller place.”

However, once lockdown lifted, things immediately improved. “Now everything is open and it is super cute,” says Cindy. “Everyone is really friendly and there are so many things going on.

“Recently, we have been to a bull festival and there are music events over the summer. There is much more happening than I expected.”

A lack of restaurants nearby has been offset by the large American-style kitchen the couple now enjoy in their new house.

“In our old apartment, we didn’t even have a single kitchen drawer. Here, we have an enormous kitchen, so it is no hardship to stay in and cook,” says Cindy.

'When starting a new life, it is easy to imagine what you want, or the kind of property you will need – but nothing beats the experience of living somewhere and finding out for real'

With the property located 20 minutes from Montpellier, it is ideal for trips into the city for nights out or to soak up the atmosphere.

“I am glad we rented first, as we had the option to change our minds.

“We thought we would never move out of a city, but I am so glad we did. We are enjoying the space and feeling part of a small community.”