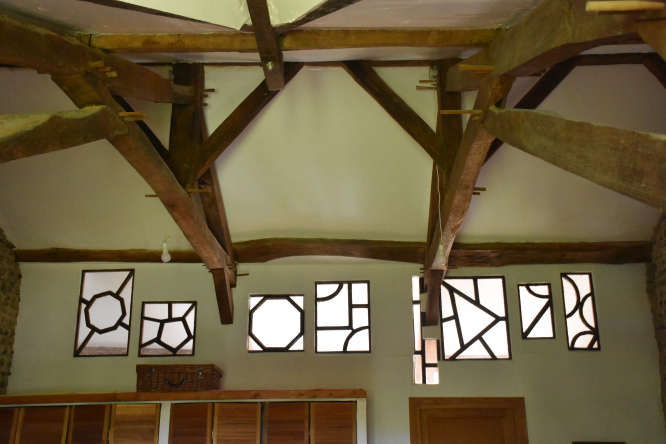 The beauty of architecture is not fixed in stone (metaphorically). It is an accumulation of ancestral ideas
By Nick Inman

DIY has three great attractions for me. First, it is usually cheaper not to pay for outside labour and expertise – as long as I have the tools, can do the job as well as a pro, and I don’t take forever about it.

Secondly, it is satisfying to learn new skills and it has boosted my French vocabulary no end. Combined, these two have meant the difference between success and failure in the wrestling match that I have daily with my big French farmhouse, where something always needs doing: versatility, self-reliance and problem-solving are not optional extras.

But the third and main reason I like to do things myself is that I can do them the way I want them done.

That usually means taking a functional approach – either water comes out of a tap or it doesn’t – but whenever I can, I add a personal touch.

A lot of creative DIY comes out of necessity

DIY allows me to express my creativity in a practical, permanently visible way.

I am, of course, careful to respect the harmony of vernacular architecture, including official regulations and unspoken rules, but that still allows a bit of wriggle room.

The beauty of architecture is not fixed in stone (metaphorically). It is an accumulation of ancestral ideas.

The modern way is to make everything boxy, regular and straight, but an old house is nothing but erratic shapes.

A lot of creative DIY comes out of necessity: you have an odd corner to make use of, so you fill it with some appropriately unusual shelves made out of ripped-out floorboards.

Personalising a house in this way is not a new idea. We think of rural history as a struggle for survival with no time for aesthetics, but there are plenty of features in historic domestic buildings to show that home improvers have always indulged in eccentricity. No two old houses in France are exactly alike and there is no perfect model to adhere to.

Frequently, decorative stones from a nearby ruined chateau or abbey turn up proudly placed in a farmhouse wall.

I don’t believe anyone who says some people are creative and others aren’t. Everyone is creative, and some of the best ideas come out of needs and available material, not out of the head of a genius.

A friend showed me some rotten beams he was thinking of chopping up and burning.

Next thing I knew, he had used them to create a delightful screen next to the open-air family gym in the barn.

Bricks and blocks of stone similarly have endless possibilities, and travelling around France, I have seen ingenious uses for discarded pan tiles.

New materials can also be incorporated into interior projects. After I’d finished tiling a shower, my sister-in-law gathered up the broken pieces of tile and arranged them in an ornamental panel as mosaic decoration for the bathroom.

This technique, much used by Antoni Gaudí in Barcelona, is called trencadís.

A final example. I needed to let light through a boring plasterboard partition wall but I didn’t want to end up with a row of featureless rectangular windows. So I divided the frames up into various geometric forms using 2.7 x 3.8 battens (linteaux), cutting a rebate into each one to take the polygonal glass panes.

It was a lot more work but I ended up with something I enjoy looking at, rather than looking through.

DIY tips for French farmhouses: how to cover tiles