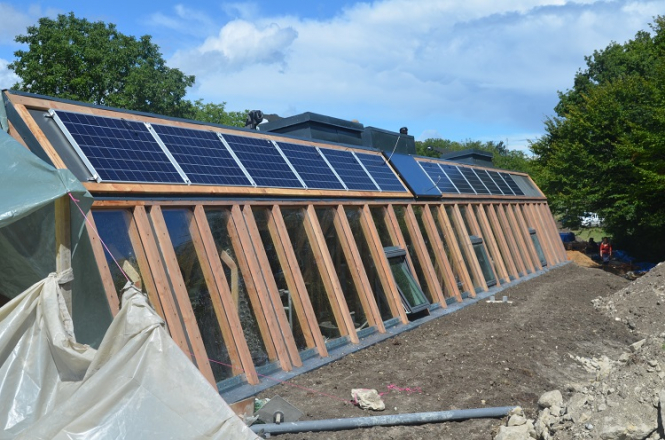 Do you fancy living in the ultimate eco-home, built largely of recycled materials, where you receive no bills for water, electricity, gas or heating? A home which is self-sufficient because it has been designed so that it needs no heating, collects and treats its own water and makes its own electricity?

American company Earthship claims this is possible and it has just completed its third house in France, at Biras in the Dordogne. Benjamin Adler and Pauline Massart, a French journalist and Belgian zero-waste consultant, and their three-year-old daughter are now the proud owners of a two-bedroom, two-bathroom 150m² house at a total cost of €320,000.

It was built during the summer by a team of 100 workers who had come from all over the world to learn how to create an Earthship house.

When I visited, they were busy all over the site, polishing bottle ends, laying floors, building stairs, moving earth and laying cables. Most of the workers had paid to be there as they were learning on the job with workshops and lectures from Earthship experts during the four weeks the house took to build.

Benjamin had decided to create his own Earthship after a visit to the company’s headquarters in Taos, New Mexico, in 2014. There he was inspired by the work of US hippie and architect Michael Reynolds, who has been working on the concept since the 1970s.

“I went there as a journalist but really loved it,” he said.

“Pauline and I wanted to have a home that suits our values but at the same time feels comfortable, and where we know we are doing as much as possible for the planet.

“We both work from home and we want to be in a place we can be proud of because it is both beautiful and we feel we are doing something good. I think it is especially important to inspire other people to live in a similar way and to show that anyone can act according to their values.

“We all say that governments should be doing more for the climate, but in fact we can all do more ourselves.”

Benjamin said that once he had found the land, he had no problems getting planning permission and the local authorities had been helpful.

The mairie at Périgueux got involved by asking people to collect metal drinks cans and Benjamin went round restaurants and recycling centres in the area asking for bottles and cans. In all, he collected 6,000 bottles and 3,000 cans.

There are many Earthship models which have been developed to suit climates and budgets all around the world. The Adlers’ is what is called a basic global model and uses the core principals of this kind of extreme eco-housing.

The design of the house and its aspect is vital to provide a temperature of 23°C throughout the year, and has to be adapted to local climates.

Earthships are both thermal mass homes and passive solar homes. They store the heat generated by the sun via their windows along the front of the house, in the very thick walls at the back of the house, made up of layers of horizontal tyres and soil, buried under mounds of earth. The semi-underground back walls use the principal that the earth’s temperature is fairly constant at more than 1.25m below the surface and that heat will be stored until the temperature in the adjoining space decreases, when it will be naturally released to warm up that space.

The aspect of the windows is designed so that the glass will attract maximum sunlight in winter, and minimum sunlight in summer when the temperatures will be cooled by the thick earth walls. There is a ventilation system, which helps air the house and avoid damp problems.

Earthships produce their own electricity with a pre-packaged photovoltaic, or wind, system. The energy is stored in batteries and supplied to electrical outlets. At Biras, the roof is equipped with solar panels. In France, homeowners who produce their own electricity usually have to sell it into the national grid and are not allowed to use it directly themselves. Benjamin has made enquiries, but so far no-one has been able to tell him whether he will be allowed to keep the electricity he produces for his exclusive use. If not, that may be one utility bill he has to pay to EDF, albeit a reduced one.

Though some Earthships have town water as a back-up supply, their principal source is rainwater, collected on the roof, directed into cisterns and then used four times. Water from the cisterns is gravity-fed into a Water Organising Module with a pump and filter which Earthship says cleans it adequately for human consumption and other household tasks. Resulting waste water is treated first within the house where it is filtered through specially designed interior plant beds, which can also be used for growing food.

It is then collected for use in the toilets, and the sewage waste is then treated outside in a septic tank before running through drainage beds.

Recycling grey water through the indoor beds is a  fundamental concept of Earthships as food can be grown in what is, in effect, an indoor greenhouse. Benjamin hopes to be as self-sufficient as possible in vegetables and fruit.

Phil Basehart is one of the Earthship tutors who took part in the build at Biras, which was the first ever teaching project in France. He lives in an Earth­ship in New Mexico, and says that after 40 years of research the technology works, and is becoming cheaper.

“I feel much happier living in a house like this. The building cost is about the same as a conventional house and there are no bills. You sometimes have to make lifestyle adjustments. If it is cloudy, you may have a little less electricity, so you just use less. It means you take full responsibility for the way you live and are more connected to the planet,” he said.

Student Alexander Routch­enko (36) is a boat builder from Scotland. “I have paid €2,100 to join the Earthship Academy which includes this build and another one later on.

“It is worth it because I want to learn the specific building techniques so that one day I might be able to build a house for myself like this. Meanwhile, I want to learn a lot more and help others build their houses.”

Earthship is a brand name and can only be applied to a house approved by Michael Reynolds. He sells his drawings, designs and patented systems, and will supply technical help to build the home.

The first Earthships were built by Mr Reynolds in the harsh desert conditions of New Mexico. One “landed” in France in 2007, built by English couple Kevan and Gillian Trott in Ger, Manche. They sold it in 2014 and it is now a holiday home.

This was followed by a second Earthship near Rostrenen in Brittany, which was finished in 2009 by Daren Howarth and Adrianne Nortje and documented by the UK television show Grand Designs.

There are now official Earthships in Brighton, England; Kinghorn, Scotland; Portugal, Spain, Sweden, Denmark, Germany, the Netherlands, Estonia and the Czech Republic, as well as the US, South Africa, and South America.

There are other homes inspired by Mr Reynold’s work all over the world.