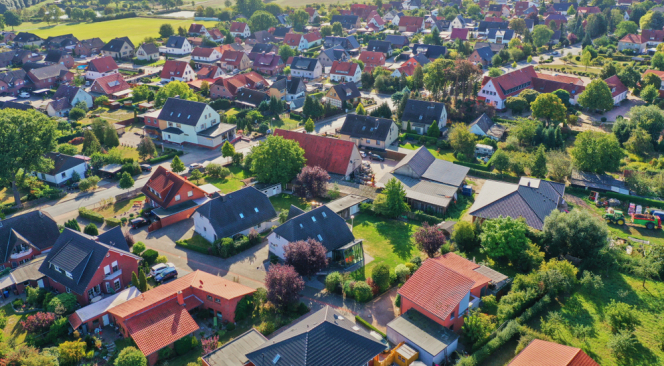 France's housing minister has sparked a debate about what place detached houses with gardens have in the country's future, saying they pose ecological problems Pic: Geogif / Shutterstock

France’s housing minister has sparked debate by saying that detached houses with gardens represent an unsustainable housing model, and “make no sense ecologically, economically and socially”.

Her words have been criticised by several French construction and housing federations, with one, the Pôle Habitat FFB, saying it “deplores the persistent stigmatisation of individual housing on the grounds of the errors of urban planning policies that belong to the past.”

Housing minister Emmanuelle Wargon was speaking on Thursday (October 14) at a conference that marked the end of a nine-month project called ‘Living in the France of Tomorrow’, which was led by the ministry and aimed at finding greener and more efficient living models.

Ms Wargon described the housing model of individual houses with gardens (known as pavillons in French) as being a “dream built for the French in the 1970s” that has no future.

She said these types of houses mean people must rely on using cars and they also lead to greater land artificialisation.

Damien Hereng, head of the French federation of home builders (the FFC), responded angrily to her words.

“We now have a government that wants to tell us where to live and in what form,” he said.

Pôle Habitat FFB, meanwhile, said the model has evolved since the 1970s

“This urban form has undergone many changes over the last few decades, in terms of land use, density and architectural quality and in terms of energy and environmental performance.”

The federation added that, “it is to go against the aspirations of the French people to denounce individual housing as the source of all evils".

A survey organised by France’s housing ministry found that 75% of people in France dream of living in a detached house with a garden.

Ms Wargon has since defended her words, writing on Twitter that she regrets the “caricurisation” of her speech.

“Yes, the French dream of detached houses because they promise comfort, space and peace and quiet.

“No one wants to stop them or dissuade them from doing so,” she wrote.

“But these houses also need to have services nearby.

“Housing estates on the outskirts of cities make it difficult to access these services and can contribute to a feeling of exclusion.

“We must therefore rethink our urban planning models.

“The #HabiterLaFranceDeDemain project was designed to overcome this contradiction.

“It highlights other models of housing, more sustainable and more pleasant to live in, many of which already exist in France and are being developed to complement the current offer.

“Faced with this crisis of social cohesion and the ecological emergency, those who do not want to change anything would have us believe that we can extend the city ad infinitum by encroaching on nature.

“For my part, I will continue to defend all sustainable housing models which, without opposing the idea of detached housing, offer prospects for the future in order to reconcile the ecological imperative with that of housing the people where they need to be.”

A vision of the future of living in France

The Living in the France of Tomorrow (Habiter La France De Demain) project was launched in February this year.

It has involved a consultation with 4,000 citizens, workshops, and six round-table discussions with urban planners, architects, industrialists, landlords, elected officials and researchers.

The topics that have been looked at are urban density, renovation, mixed-use housing, transport and consumption.

The housing ministry has published a report on its findings, which includes 10 areas that represent challenges for housing in France, and offers solutions to these issues.

You can read the full report at this link (in French).