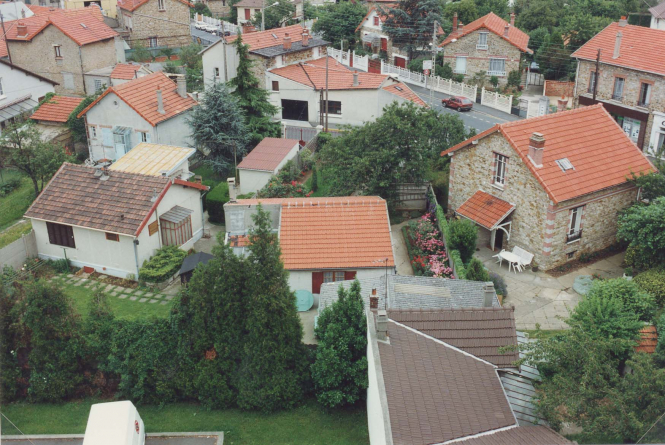 Anything built in this stone in Ile-de-France will almost certainly have been constructed between 1880 and 1930, though the stone was still used up to 1950.

Impressive villas were weekend destinations for the bourgeoisie, who could now travel to the country by train – and they introduced the modern idea of the second home.

There were also more modest dwellings for the workers as industry developed on the outskirts of Paris.

Many examples can be found and the villas continue to be seen as desirable homes, though hundreds have been demolished to make way for blocks of flats and other buildings as the suburbs grew.

The name comes from the French word for gritstone, pierre meulière, which was used to make millstones, meules.

They were exported worldwide because of the quality and hardness of the stone found in the region around La Ferté-sous-Jouarre, Seine-et-Marne.
In 1853, there were 23 companies employing up to 2,000 workers making more than 20,000 millstones a year, which were exported as far away as South America and New Zealand.

Stone from these quarries was not used for buildings as the hardest was reserved for the millstones, but there were plenty of gritstone quarries all round Paris.

Béatrix Goeneutte, director of the Maison de Banlieue et de l’Architecture association, which studies and promotes Paris’s suburban heritage in the Essonne, said there were three types of readily available gritstone in the region: “The hardest and finest was used for millstones. A compact and flinty type was used for roads and the third category was for building.

“It has many qualities which make it ideal for construction.

“It is very hard but at the same time light, because it is full of holes. It resists frost and its porous structure gives it insulation properties.

“It comes in a range of colours, depending on the amount of iron oxide in it, and can be beige, brown, orange and even red.

“It has never been considered as beautiful or as noble as the limestone that was used for Haussmann’s reconstruction of the centre of Paris some years earlier (1853-1870), but it was a cheap and plentiful material in the late 19th century.

“Now it is one of the most expensive building materials and difficult to get hold of. There are no longer any working quarries in existence and you have to find reconditioned stone from buildings that have been demolished.

“With the introduction of concrete and other mass-produced materials, the use of the stone declined and it was no longer used after 1950.”

Because the stone was irregular in shape, builders needed to use a larger quantity of mortar to fill in the gaps than is necessary with stones or bricks of a regular and uniform size.

To make the mortar more resistant and attractive, a technique called rocaillage was used. “This consists of using fragments of gritstone in the mortar,” explained Ms Goeneutte.

“First, it was used in more modest housing as it was cheap to use the small pieces of stone, but later it was appreciated in the villas as a form of decoration.”

At the beginning of the 20th century, this was a very fashionable technique.

The mortar was coloured with wood charcoal or smashed bricks, and then combined with different-coloured pieces of flint and gritstone.

“To get a deeper red colour,” said Ms Goeneutte, “they would sometimes heat the gritstone to bring out the colour of the iron oxide.”

Villas were built in different styles, according to the taste of the owner: “They vary from those with half-timbering to echo the Normandy style to others with elegant Palladian columns. Many are Art Nouveau.”

Hector Guimard (1867-1942) was one of the prominent figures of Art Nouveau, best known for his designs for entrances to the Paris Metro.

He used many materials for his creations, among them pierre meulière, which was used for the Castel Orgeval at Villemoisson-sur-Orge, Essonne, built in 1904. It was the first villa to be built on a vast area of open countryside which was destined to be developed by businessman Achille Laurent. He chose Guimard as his architect, using gritstone together with brick to produce contrasting effects.

With its surrealistic curves and towers, it has been described as one of his most sublime pieces of work and his finest villa.

It is asymmetric but at the same time harmonious.

In 1905, the magazine l’Architecture moderne wrote: “Mr Guimard has built many houses at the Beauséjour Park.

“The Castel Orgeval is one of the biggest on the site and the happiest project in the area surrounding Paris, and deserves
particular attention.”

Now privately owned, it was classified as a historic monument in 1975.

At the same period, houses were needed for the growing influx of new inhabitants from the country who found jobs in the railways and industry. Gritstone was the most available and cheapest building material so their modest homes were often built close to their workplaces.

Sometimes they were paid for by comp-anies, which built several in the same style, or they were constructed by an individual.

The stone was also used in constructions such as bridges, public buildings, and religious and industrial buildings.

While the pale limestone of Haussmann’s architecture is typical of the centre of the capital, it is the pierre meulière which is characteristic of the suburbs.

G’day Sheila could have been b’jour Bruce
16 August 2019
More from Property
More from Connexion
Get news, views and information from France
Join the newsletter
Subscribe to The Connexion