'My fibre-optic installation in France was far from speedy' 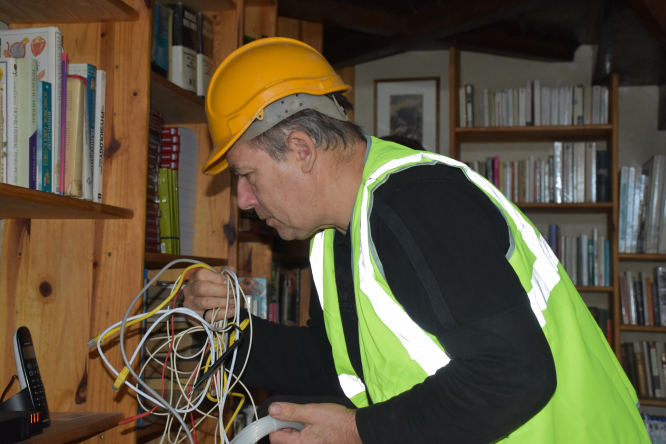 'In French, it is called balader le client: make excuses and offer inadequate solutions until the customer gets tired and gives up'
By Nick Inman

Two ‘telecommunicative’ events happened in our village simultaneously in December.

First, our internet line went down, but Orange couldn’t give us a date for it to be restored.

By coincidence, the same company was laying fibre-optic cables along our street. It seemed the ideal opportunity to solve the problem: forget about the old line and get a new one installed.

So I went to my local Orange shop and signed up. That was my first mistake. Let them come to you. A rep will call to sell you the connection. If anything goes wrong, they are responsible.

'Mistake number two: Being the first in your village to sign up to fibre'

This was mistake number two. I acted too soon. Don’t be the first in your village to sign up. Wait and see how it goes.

Combined with this was mistake number three: I didn’t do research into what fibre-optic cable can and cannot do before the engineer arrived.

He entered the house and I told him precisely where we wanted the Livebox. He didn’t say anything but asked my family: “Does anyone here speak French?”

Once we established an English accent does not mean a lack of comprehension, he gave me a lecture about how he could not put the Livebox where I wanted.

“Too many corners,” he said. “Fibre optic won’t bend into a right angle.” He snapped a piece of cable to prove his point.

The socket could only go close to the road, far from where it was needed, and nowhere else. My fourth mistake – I am too trusting. I knew this guy was a subcontractor but I believed everything he said, as he represented Orange.

Mistake number five was to give the engineer a good review too quickly. Why not? He was charming and apparently efficient. He even lodged a claim for compensation with Orange on my behalf. Five-star service, no?

But our internet connection was worse than before – and, a week later, friends said that they had their Livebox installed exactly where they wanted it.

The engineer who had come to our house, I realised, had refused to do what we wanted to make it easier for himself. The compensation claim was a piece of theatre. Perhaps he thought I wouldn’t make a fuss.

He was wrong. I went back to the shop but all they could do was pass me on to the technical department. A technician phoned a week later.

Yes, Orange would send someone to put the Livebox where it should be but they would charge me for the visit. I just wanted a service I had already paid for. So we fell into a pattern that too many companies in the modern world rely on. In French, it is called balader le client: make excuses and offer inadequate solutions until the customer gets tired and gives up.

For several weeks, I thought we’d never get beyond this stalemate. Mistake number six, playing strictly by the rules.

'I expected the company to honour its commitment to me'

But it needed a push. I decided to deploy the nuclear option and tell them I was a journalist writing for the English-speaking community in France. I emailed half a dozen press officers in Paris, in English, simultaneously to tell them I was about to write a stinking article accusing Orange of not caring about its customers.

I gave them 48 hours before I went to press. There was a reason for that timescale. When you complain to Orange via the website, you get an automated response telling you a human will respond within 48 hours. In my case, it took rather longer.

The press office reacted the next day. A lady from Orange’s “Supercomplaints” department promised to take charge of the situation personally.

I explained the story and she emailed me, suggesting the quickest solution was for me to pay Orange to fix their problem.

I knew I had them on the ropes but I wasn’t taking any chances. I recruited a French friend to write my reply.

He’s a safety inspector so he knows how to deal with officialdom and speaks “technical”.

Together, we gathered all the evidence we could, including the fact the customer’s signature on the receipt (supposedly my signature) read “Covid19”.

The email that went back to Orange left no holes to crawl through and three working hours later, I was phoned by a technical supervisor who promised a second visit from the engineer, which would be charged for but reimbursed, a bureaucratic way of admitting responsibility and not admitting it at the same time.

Seven weeks after the original flawed installation, a team arrived to move the box to a location of my choosing. They understood me perfectly.

Finally, I was able to communicate with a communications company that finds communicating difficult.

Where can I complain about slow internet speed in France?