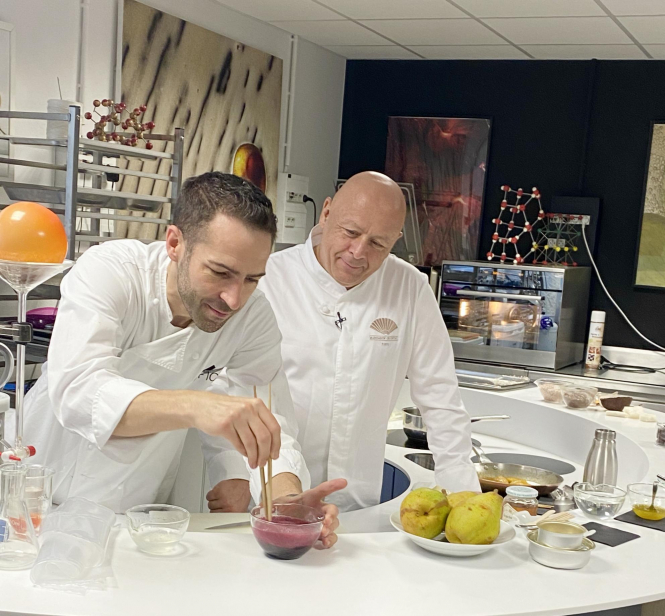 Astronaut Thomas Pesquet is to become the first French person to be an International Space Station commander but he has another role – representing French food in space.

Mr Pesquet, who will blast off on April 22 for a six-month mission, has teamed up with Michelin-starred chef Thierry Marx, who has created four French meals for him with help from chemist Raphaël Haumont.

The pair worked with Mr Pesquet on his previous mission to space in 2016/17.

Mr Haumont told The Connexion that they had received good feedback and are “delighted to participate again”.

“It is a challenge in terms of cooking, science, technical skills,” he said, adding that Mr Pesquet originally met Mr Marx before 2016 as they both take part in judo.

The pair have created four meals for the astronauts to share: A truffled pie of potatoes and onions from Roscoff, slowcooked beef with mushroom sauce, almond tart with caramelised pears, and a freeze-dried cherry tomato dish.

Mr Haumont said the aim is “conviviality and pleasure. It puts Thomas in the role of an ambassador of French food, to show off the flavours to others.

“The other astronauts will bring with them some foods that maybe Thomas has never tried, so there will be a real culinary exchange.

“It demonstrates the country’s heritage, and opens people’s minds to French cuisine.”

Mr Haumont said there were three challenges when making the food.

First, nutrition – the meals have to be very balanced in terms of fats, fibre and carbohydrates and have very little sugar.

Secondly, they had to ensure no harmful bacteria got into the meals.

Thirdly, they had to make sure the meals did not create crumbs as, due to weightlessness, they could end up clogging equipment. Mr Haumont said he thought they had been successful.

“I am maybe not very objective but I think the meals taste great,” he said.

He added that another factor is that, in weightlessness, astronauts can lose their sense of taste slightly.

“So we really packed the dishes with flavours. Maybe they are too strong on Earth but it will be very good in space,” Mr Haumont said.

Mr Pesquet will be joined on his mission by Akihiko Hoshide from Japan, and Shane Kimbrough and Megan McArthur from the US.

French wine returns from a year in space

space
food
More from Science and Technology
More from Connexion