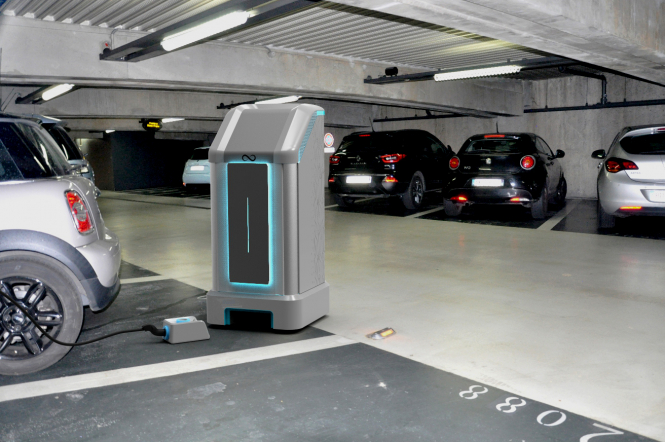 The prototype robot (above), designed to charge electric and hybrid cars in garages, has reached the stage where potential customers are being invited to see how it works

Given the working name “Charles”, it has been designed to solve one of the key problems of electric vehicles: how to charge them while at work or at airports, without having to move them from the electric point once full. Salim El Houat, chief executive and co-founder of Lyon-based Mob-Energy, told Connexion: “The classic case is someone who takes an electric car to go to work and plugs it in a street charging point in the morning. Once the battery is full, or has the charge they want, the car sits there without charging until either they leave work to move it to another parking space, which might not be easy to find, or until they go home hours later. In either case, there is a significant time when the power point cannot be used by anyone else, and is just trickle charging the car.”

The robot solution is also useful for places such as car parks that do not have rows of high-powered wall chargers. Real-life tests were due to start on-site in Lyon in March but were put back to September because of the coronavirus pandemic. There will also be more tests in the garage of a large company in Paris from September, and it is expected the first commercial models will be operating in autumn next year.

The robot operates from a charging station linked to the grid. When customers want to use it, they plug in a cable linked to a box which sits on the ground. Using their smartphones, they tell the robot how long they will be away and how much charge they want to have. The robot, which uses recycled electric car batteries to hold its own charge, then moves between vehicles which need charging and its charging station, to ensure all the cars are ready when their drivers want them again.

“If it is in an airport and the driver is away for a week, then the car will most likely be charged by the robot at night, while day-trippers will be looked after during the day,” said Mr El Houat. The other strong point of the robot is that it will be able to adapt the charge according to the capacities of the vehicle. Not all vehicles have the same charging capacity or system.

“So someone with a plug-in hybrid, which has a relatively small battery that can only take a relatively weak charge, can be served just as well as someone with an electric sports car with a huge battery,” said Mr El Houat. “While charging a battery will be its main job, a robot presence might well be able to serve a security function by discouraging groups of youngsters from loitering in the garage, for example, or be a mobile camera to alert security staff when there is a problem.”

Where to find electric car charging points in France