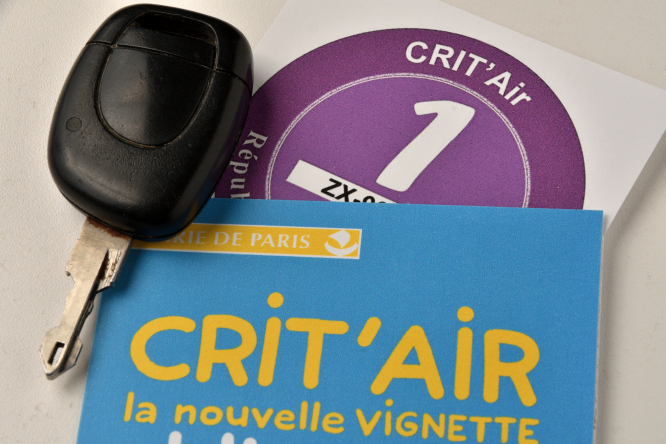 Crit’Air stickers must be displayed on the windscreen to allow police to spot non-conforming vehicles Pic: Gerard Bottino | Shutterstock

When pollution levels rise, only the least polluting vehicles – often those meeting Crit’Air 1 and 2 (cars dating from 2006 or later) or electric vehicle standards – are allowed to drive there by government decree. In addition the number of cities where stickers are mandatory is set to rise as part of a new climate Bill passing through parliament.

Crit’Air designation is based on details on the vehicle’s carte grise, especially its first registration date, but the system does not work for véhicules de collection.

These have special registration documents and are by definition at least 30 years old.

Crit’Air stickers must be displayed on the windscreen to allow police to spot non-conforming vehicles.

In addition to the 11 nationally-designated ZFE-Ms, another six cities have said they will introduce their own bylaws for locallyruled zones, based on the national ones.

Allan Dollie, a member of a Citroën Traction Avant club in Périgord, said: “It is a problem car collectors’ clubs are worried about. People are worried that – as more cities have these rules insisting on Crit’Air stickers – that it will become impossible to drive in a collector’s car.”

Support came from the Senate, which has voted to create a Crit’Air sticker for collection cars, which has to be voted on by MPs.

Several amendments to the climate law going through Parliament make similar proposals. Car clubs fear the government might prefer instead a solution proposed in a recent report to the Transport Ministry, whereby individual mairies would decide whether or not to allow an exception.

The clubs are concerned that many may refuse in case they are seen as favouring “wealthy” vintage car collectors while penalising the poorer people unable to afford less polluting vehicles.

“So far, no one has had any problem but it is something people think could take cars off the road in future,” Mr Dollie said. Specialist websites calculate that as many as 900,000 cars could be affected in France.

They say that car clubs organise 10,000 events annually and support 4,000 specialist garages and other businesses, employing 20,000 people directly and at least the same number indirectly.

Mr Dollie said: “The majority of these cars are only driven on special occasions – they are not used for daily commutes, so their contribution to air pollution is minimal, especially as they are usually well-maintained.”

17 hours ago
3
Why are Covid cases in France still higher than in most of Europe?

Process, costs, carte grise: How to register a car in France
7 January 2022
More from Transport
More from Connexion
Get news, views and information from France
Join the newsletter
Subscribe to The Connexion