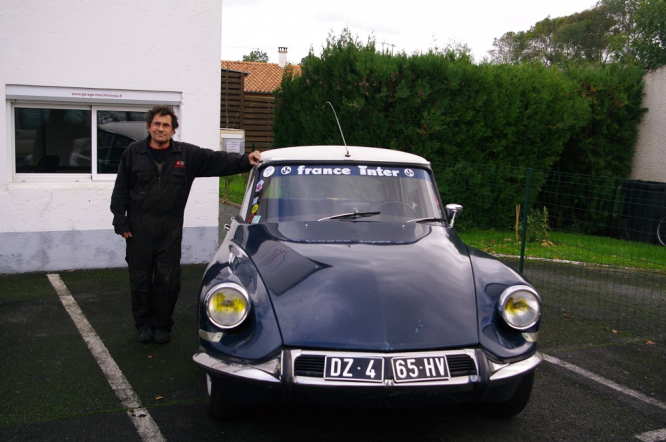 Patrick Marchesseau with one of his favourite Citroëns
By Brian McCulloch

Owner Patrick Marchesseau is the third generation to run the garage, in Corme-Royal, Charente-Maritime.

He succeeded his father Guy – and his son Benoit is preparing to take over when he retires.

Mr Marchesseau said: “My grand-father Harris Marchesseau was an apprentice blacksmith in 1909.

“By 1919 he was set up in his own business but was fascinated by the cars and lorries that were starting to arrive in the countryside.

“André Citroën set up his first agency in Saintes and somehow, we do not know how, he met my grand-father and signed him up as his second agency.”

How his grandfather got his English-sounding first name is also a mystery.

The Saintes Citroën agency is now a concession, and has passed through a number of hands before becoming part of a large garage group.

Garage Marchesseau proudly carried the number 002 in the Citroën network until the year 2000, and is still registered under that number in the parts computer.

The new millennium saw Citroën make changes to its concessions and agencies. Mr Marchesseau said: “They said we all had to paint our buildings grey and red, have everyone running around in a uniform like the army, and stop clients from going into the workshop. There were also changes to the computer and ordering systems, and I just had enough.”

He took his garage out of the network and soon built up a name for himself as a restorer of old Citroëns, especially DS models, which last came off the production line in 1975.

“I have worked on all the old Citroën models but the DS is probably my favourite,” he said.

“Some people are a bit afraid of them but when you know what you are doing, they are lovely cars to work with. Sure, there are bits that are complicated but there are also the tools and knowledge to fix them and there are plenty of spare parts around.

“Citroëns are the most collected cars in the world, and there are a surprising number of DSs still going, probably 3,000 in France.”

The attention to detail he puts into restorations is astounding – down to using original bolts, of Citroën’s design, to attach the radiators.

Full restorations are expensive – €40,000 to €60,000 – but owners take the gamble for the love of the car and the belief that the money will be regained if they ever have to sell.

“By the time it is completed, the car is in the state it was when it left the factory – in fact, sometimes better,” said Mr Marchesseau.

The garage restores other Citroën models up until the time electronics started playing a big part. “I really do not like the modern models, filled with electronics,” he said.

“You can fix everything to do with the machinery beautifully, then spend weeks trying to track down one faulty electronics sensor hidden away in a corner of the engine compartment.”

Other models are also restored – at the moment, a Peugeot 404 station wagon is in the middle of the process.

For collectors with lighter wallets, he said V6 Xantia Activas from the late 1990s, are a possibility, and can be found for less than €5,000.

“They were the first to use a modified system of the famous pump-up hydraulic system found on the DS, which keeps the car flat in corners,” he said. “It was technology that luxury brands are only just starting to put in their models 20 years later.”

By contrast, a professionally restored 2CV is on the forecourt with a €17,000 price tag.

His own collector’s pride and joy is a beautiful Citroën SM, with a Maserati engine, inherited from his father.

Part of the garage has been turned into a museum, detailing its history.

Hundreds of exhibits start with Harris Marchesseau’s blacksmith tools, including one of the first self-heating soldering irons, which used oil and a wick to heat the point.

Family photo albums trace the garage’s history, and the exhibits include the first computer bought by the garage in the mid-1980s.