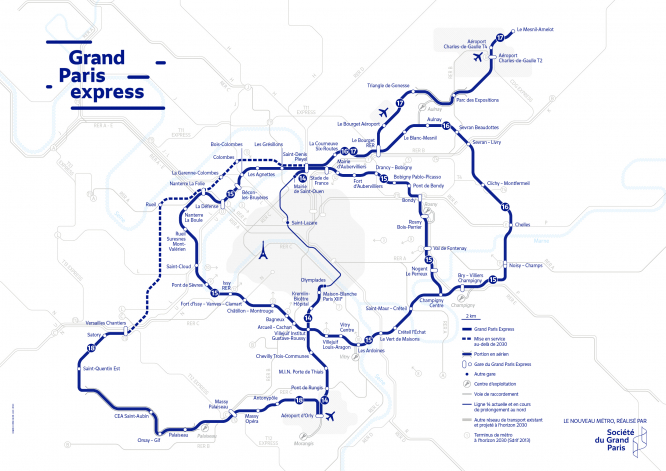 All over the capital, building work is creating the Grand Paris Express – a project to construct 200km of railway for an new automatic metro system.

The idea is to reduce congestion by allowing travel based on a ring running around the outside of the capital, well beyond the boundaries of the Boulevard Périphérique.

It will have 68 new stations and promises trains every two to three minutes, aiming to offer a real alternative to travel by car.

Other promised spin-offs include thousands of new jobs and homes.

The Société du Grand Paris, a body created by the government to oversee plans to modernise the wider Paris area, of which this is a key part, said it could generate €100billion in GDP.

Completion is planned for 2030, although work is behind schedule

The delay is of course not helped by Covid-19 and confinement. The cost is estimated at €35.6billion.

Paris mayor Anne Hidalgo and ex-prime minister Edouard Philippe recently supported an extension of the project to reach Rouen and the Channel port Le Havre in Normandy, where Mr Philippe is now mayor, about 120km and 190km north-west of the capital. The Métropole du Grand Paris, an intercommunal authority with responsibility to oversee upgrades to the capital’s infrastructure and ensure it remains a leading international city, was launched almost five years ago.

It is made up of Paris and 130 surrounding (mainly Petite Couronne) communes, with powers to develop housing and make environmental and other urban improvements.

A recent letter by 40 Parisian LREM MPs said these measures were not progressing fast enough. They said the Métropole is powerless and action is needed to do more, especially to improve living conditions in the capital.

One of them, Pacôme Rupin, LREM MP for the 7th arrondissement, told The Connexion the capital has the worst record for social, economic, cultural and educational inequality of any city in France, despite decades of work by politicians of all stripes.

"Pollution is getting worse, the housing crisis has never been so bad, and daily life is a struggle for many", he said. “We can do better. More people are leaving Paris, for several different reasons, so we must act rapidly.

'We need to rethink the Métropole du Grand Paris'

It has little power. Its budget is around €40million, whereas the Mairie de Paris has €10billion."

“It needs to include not just the inner densely populated areas, but also outlying areas. You cannot develop a city where everyone develops their own strategy in their local neighbourhood."

“The idea of the Métropole is a good one, but it needs the power to function correctly. It is up to us, the MPs, to work in consultation with local councillors, find the best structure to manage the problems and introduce it with legislation in parliament.”

He says the capital’s LREM MPs support the new metro: “This is an exceptional project. It will have a big impact on the lives of people in the Ile-de-France when it is finished. It costs a great deal of money but it is worth it because it will provide a network of automatic metros which will relieve congestion and pressure on public transport today."

“It will mean you can avoid crossing Paris when you want to go from Saint- Denis, for example, to Orly.”

He does not think extending Le Grand Paris to Le Havre is workable or necessary. “First, we need to sort out Le Grand Paris in the Ile de France and then we will see. There is work to be done on rail and river links between Paris and Le Havre, but I do not believe we need to extend the region to do that."

He agrees improvements are necessary to improve Paris’s standing.

“If we want to be able to compete with Greater London, New York, Shanghai, Singapore and Hong Kong, we need to have a good political metropolitan structure.”

Above all, he said, change is essential for residents: “Le Grand Paris is really for people who cannot afford to live in the centre of Paris. It is a social project, for equal opportunities.

“We cannot leave places like Seine- Saint-Denis in such a backward situation in comparison with other areas.”