Valeo electric car motors to be used to power e-bikes 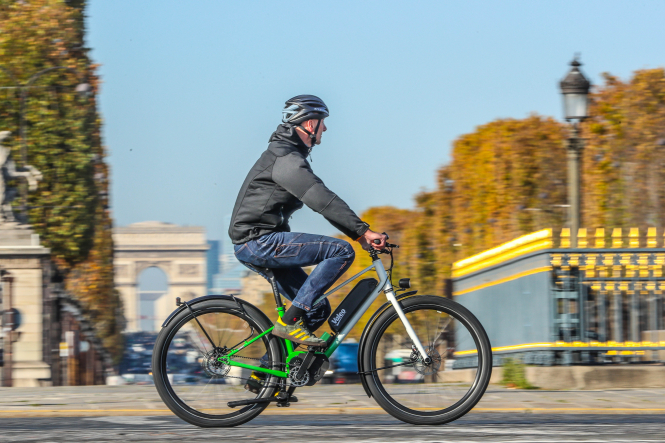 The bicycles also have a reverse gear, the ability to recharge the battery on long downhill runs, and a “walk assist” mode
By Connexion journalist

Pedal-power is getting a lot easier, thanks to an innovative French car-parts maker.

Valeo has converted 48-volt electric motors used for air conditioners in electric cars into a power system for bicycles.

Coupled with an automatic gearbox, a battery pack and computer software, the motor is said by the company to make cycling easier than with any other system, kicking in and adapting to the rider from the first pedal stroke.

It increases a cyclist’s efforts by a factor of eight and the company says a cargo bike with the system can carry a 150kg load up 14% gradients without the cyclist breaking into a sweat.

The top speed is limited by legislation, with 25kph the ceiling in Europe before you start to need a moped licence, helmet and gloves to ride electric vehicles.

The bicycles also have a reverse gear, the ability to recharge the battery on long downhill runs, and a “walk assist” mode.

Valeo has more than 109,000 employees in 33 countries but said it will not be making bicycles itself

Instead, it will sell the motors and gearboxes, which fit into the crankcase of the bicycle, to specialist manufacturers.

Jérôme Mortal, the company’s new mobility director, told The Connexion: “We decided it is better to stick with our role as a supplier of high quality systems to others.

“There are lots of specialist bicycle makers out there who know their own business very well.” The bicycle system was designed in Lyon and production will probably be close to the first customers to sign up for the bike.

“There are makers in the US and Europe who are interested and they say they would like our production to be close to them.

“That is likely to be what happens,” said Mr Mortal.

The 48-volt motors for electric car air conditioners are made in Poland and in China but both lines are working at full capacity and will not be able to cope with additional motors for bicycles.

Prototypes all had rubber belt drives, rather than chains, except for the mountain bikes, where chains are better for dealing with mud.

“Belts work well, are cleaner and need less maintenance, and they also show well that you do not need dérailleur gears, which is something that all our competitors need,” Mr Mortal said. The choice of whether to have removable batteries or to have a system where a cable plugs into the bike is also being left to cycle manufacturers.

The range will depend on battery choice, but Mr Mortal said it will be at least the same as competitors.

The whole system – a motor, gearbox and controller – weighs 4.5kg, and the company says it is priced at the same level as other, less powerful, electric motors and dérailleur gear sets.

Mr Mortal said 57% of Valeo’s business now comes from green initiatives to reduce CO² emissions, including using electric motors to make cars more efficient, and he is sure that “new mobility” initiatives, such as the Citroën Ami urban electric vehicles rolled out this year, will take off.

“Electric bikes are part of that, and when you see people now on electric bicycles, and you can tell from the way they use the pedals that they have not been on bicycles for a long time, it makes you realise how important it will be,” he said.

“Above all, I hope people will have fun on bicycles with our system.”

Valeo, which is listed in the SBF 120 index on the Paris Stock Exchange, had sales of €19.5billion in 2019, and has 189 factories, 20 research centres, 43 development centres and 15 distribution platforms.

It spends about 13% of its sales on research and development.