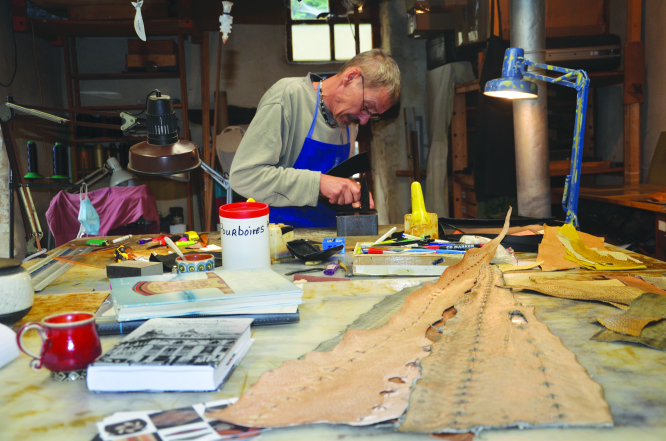 Each handbag, briefcase, belt, wallet and purse is a tribute to a Siberian people who perfected fish leather tanning techniques over centuries.

Anyone who visits his workshop near Montignac, Dordogne, is assured a warm welcome. Mr Mascher is happy to recount the remarkable story of how he discovered fish leather made by a descendant of the Nanai people, who lived by the Amur river on the border of Russia and China.

“All animals have skins, which we turn into leather to preserve them by permeating the skin with a liquid which alters the protein structure.

“Fish have 100% waterproof skins so it is particularly difficult to find a way to introduce the tanning liquid.

“In the modern world, chromium salts are used but they are toxic and break down the structure, making the leather weak and unattractive.

'The Nanai must have spent hundreds, perhaps thousands of years experimenting before they came up with the perfect solution, using plants'

“The resulting leather is tough, durable, easy to work with and beautiful.”

Their natural methods preserve the nuances of shade, light and scale pattern, Mr Mascher said. Different plants produce different colours. Although people of Nanai ethnicity still exist in the area, the tribes and their traditional lifestyle were dismantled under communism.

Children were taken from families and brought up in faraway orphanages. Skills disappeared because the Nanai could no longer pass on traditions.

One of these children, nevertheless, decided to find out more about his ancestry.

Anatol Donkan, now in his 60s and living in Germany, discovered costumes made by the Nanai people in museums throughout Europe. They had analysed them and knew what plants had been used to make them but did not know how.

Mr Donkan found a technique which works and now Mr Mascher buys his skins – mainly salmon and sturgeon – from him.

“I have a special link with him through my great-grandfather,” he said. “When Anatol was studying the costumes, some of them appeared unworn as if they had been created for display.

“They had been gifted by an Adolph Dattan who had visited the Nanai tribes when he went to the area as a salesman for a German company, helping the Russians set up their new colony in Vladivostok in the 19th century after annexing the territory from China.

“This young German explorer was probably the first friendly white person the Nanais had ever seen. He paid them to produce tribal garments for European museums.

“Mr Donkan wanted to make contact with the explorer’s family and was put in contact with me – he was my great grandfather.

“He never talked to anyone about this part of his life, but when I work, I have the impression I am walking in his footsteps. He discovered the Nanai, who knew how to look after their environment.

“I left home when I was 17 to travel. I thought work was of no value until I met a self-taught leather worker when I was grape-picking.

“He taught me his trade and showed me respect and I found working could be worthwhile.

“With his help, at 19, I had a stand at a Berlin trade fair. Then my life changed again when I discovered Anatol’s fish leather 20 years ago.

“It is a very versatile material, but it is so precious I use it for decoration only. I try to capture the light and the beauty of it, and in many of my bags, the spirit of the Nanai, whose decorations reflected their beliefs in the spirits of nature around them and were always curved and never geometrical.”

It takes him around 20 hours to make one bag. He uses cow leather lined with pigskin, sourced to make sure they are tanned with natural products.

The leather is sent off to be sliced horizontally to give him just the thickness he needs.

He makes a template for each bag and then cuts, glues and sews. He has discovered a technique for inserting thinner fish skins by taking off a layer of animal leather. No one has been able to copy him and each creation is unique.

He spent two years teaching his son Jonathan his methods. He went on to study for a CAP in maroquinerie, and will one day carry on his father’s work.

Mr Mascher does not know whether Mr Donkan will ever pass on his secrets: “I have worked with him for 20 years and have never been allowed to see how he works. He was brought up under such terrible circumstances, he has no confidence in the outside world.

“He learnt to heal himself from the wounds inflicted on his ancestors, not to commercialise them.”

Autumn rise in cognac exports in France after difficult year