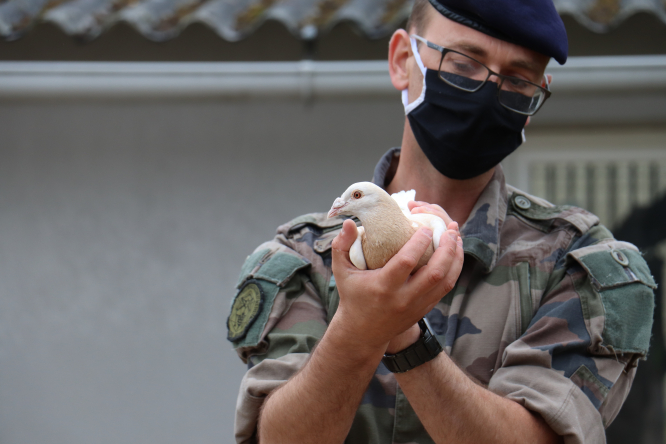 'During World War One more than 30,000 pigeons were used by the French army' Pic: Maréchal des Logis Sylvain

France is the only European country whose army continues to breed and maintain a colony of carrier pigeons... just in case they are needed in the event of a new war.

Maréchal des Logis Sylvain, of the 8th Régiment de Transmissions at Mont Valérien in Hauts-de-Seine, looks after the 200 birds. [It is usual practice not to use surnames in official titles]

He said: “They are no longer used for military purposes but continue to be trained and kept fit, so if ever needed in a war situation, they could be used.

“With modern communications, this is highly unlikely and would only be if there was a total blackout.”

Their only current role is to be released during military ceremonies.

General de Gaulle withdrew pigeons from active service in the 1960s but decided to continue the army dovecote to maintain tradition and as a memorial to their active past.

A museum near the Mont Valérien dovecote tells of their use in war since the 1870-71 Franco-Prussian war and the siege of Paris. Carrier pigeons were the only way the French could communicate with the capital.

After this, regiments began to have their own dovecotes and during World War One more than 30,000 pigeons were used by the French army. They were used over short distances and lodged in mobile caravans just behind the battle lines.

The most famous was Le Vaillant at Fort de Vaux near Verdun in 1916.

The fort was being bombarded with 8,000 shells a day that cut phone lines. Pigeons were the only way to send a message, so commander Colonel Sylvain Raynal sent his last bird with a note calling for help.

Le Vaillant flew through smoke and explosions to reach its dovecote and sound the alert. Unfortunately, the fort was not saved, but Le Vaillant had fulfilled its mission and was awarded the Croix de Guerre for exceptional courage. It died in 1929, was stuffed, and is now in the museum.

“The pigeons sensed the difficult context they were in and did show bravery flying in extreme conditions,” said Maréchal des Logis Sylvain.

In World War Two, the Germans forbade the use of radios and carrier pigeons but British forces parachuted in 16,500 birds to help the Resistance gather intelligence as the birds carried cameras.

Now Maréchal des Logis Sylvain keeps them active by training them for races that can be from 100km to 1,000km.

“They are released at the required distance from their home dovecote and the return is timed. The bird with the best average speed wins.

“They fly from 60kph to, in exceptional conditions, 120kph. In last weekend’s race, the best was 80kph.”

He feels lucky as he is pursuing his passion: “I learned as a boy from my grandfather who was a pigeon fancier. When I joined the army I had no idea this job existed, but when I heard of a vacancy, I applied and was lucky to be chosen.”

Much of his time is spent cleaning the dovecote but he said: “This allows me to be near the pigeons, check their health, get to know individual characteristics and learn everything about them.

“It is like being a sports coach for a top athlete, except I am responsible for every part of the pigeon’s life: their food, selecting the best for breeding; training them for races; and looking after them from birth up to their death.”

In 2012, it was claimed that the Chinese army was training up to 10,000 birds but Maréchal des Logis Sylvain said there was no proof.

“It is true Chinese pigeon fanciers are paying a lot of money to buy pigeons, but no one knows if this is for the army.

“If we needed to use our pigeons for military use they would need extra specialised training but they would be fit and healthy for duty if required.”

Vibrating vests let hearing-impaired feel music at concerts in France
21 July 2021
More from Work
More from Connexion
Get news, views and information from France
Join the newsletter
Subscribe to The Connexion