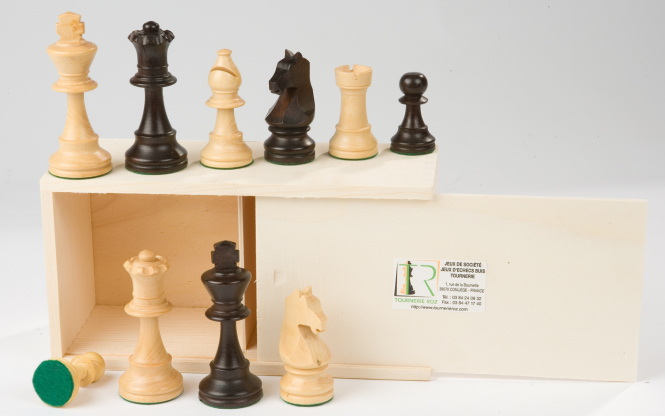 Tournerie Roz’s handmade chess piece business has had a boost from people at home playing games and looking for ‘made in France’ items Pic: Tournerie Roz

France's last artisanal chess piece maker has had its fortunes transformed by confinement and the Netflix hit series The Queen’s Gambit.

When Brigitte Roz-Bruchon took over the Tournerie Roz at Conliège in the Jura from her father in 1990, she promised to keep the business going, even though imports from Asia were already making life a struggle.

In the 1950s, he had been approached by two British brothers who were touring the Jura wood-turners to find someone to make chess sets from the much-prized local boxwood for their business, House Martin.

Michel Roz was the only one to agree, and his reputation soon grew.

Mrs Roz-Bruchon has fond memories of the Bloom brothers from House Martin: “We had a very good relationship. When I was a young girl, they would send me wonderful presents and my parents went to visit them in London.”

House Martin was eventually taken over by Waddingtons. Tournerie Roz continued to work for them, but competition from abroad meant they were making just 80,000 sets a year.

In 1994, Mattel-Hasbro bought out Waddingtons and moved its chess piece manufacturing business to Taiwan.

“We carried on making other games and wooden items. In 2005, I reluctantly had to let my last employee go. My husband Patrick carried on in the workshop and I had to get another job. We kept all the machines for making chess pieces but they remained idle.”

Then confinement came. She said: “People at home started playing games and were looking for ‘made in France’ items.

“Our website began to rise in the search engines as more and more people clicked on our site. Then The Queen’s Gambit attracted new players."

“We are making around 300-400 competition quality games a month. We will retire in 2022, but now we are looking for someone to take on the business, which is now worth selling, and I can finish my career satisfied that I carried out my promise to my father.”

French love board games more than any other European country

16 hours ago
2
Coronavirus: Daily updates on the situation in France

Help is at hand: Mayday signal’s French origins explained
22 May 2021
More from Work
More from Connexion
Get news, views and information from France
Join the newsletter
Subscribe to The Connexion