French ‘RoboCrop’ pilot scheme could be solution for small-scale farms 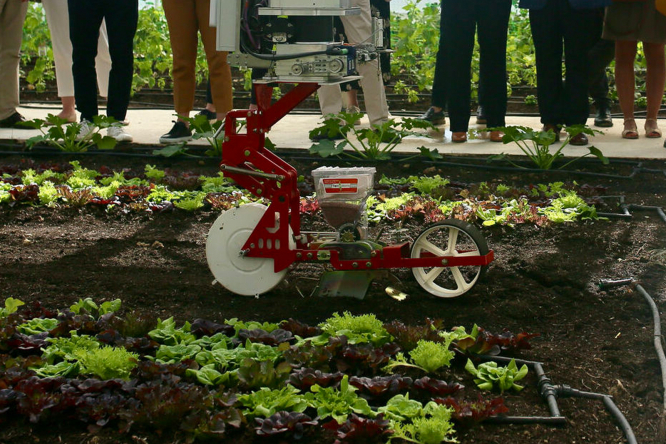 Market gardening, which traditionally sees workers in hot and humid tunnels spending hours bent double over crops, is a sector of agriculture where it is hard to find labour in France Pic: NeoFarm

A pilot scheme using a robot to take the hard graft out of market gardening could be a solution to labour shortages in the sector.

The machine, which runs on rails in a greenhouse tunnel and is driven by dedicated software, can be adapted to do many of the arduous, repetitive tasks needed to grow fruit and vegetables commercially.

It is the brainchild of NeoFarm, which offers technological solutions for small scale farms.

The firm says it will provide organic vegetables at competitive prices and be better for the environment.

Chris Roig-Ramos, of NeoFarm, near Paris, said: “We can’t yet get the robot to replant tiny seedlings into pots, but it can prepare the soil and plant seeds with perfect spacing in straight lines, and then do mulching and weeding.

“We even have tools for the robot to harvest vegetables like carrots, onions and turnips.”

The idea, he says, is not to have huge greenhouses specialising only in crops which can be grown with maximum mechanisation, but to have a variety of vegetables offering everything a local greengrocer – no further than 50km from the farm – needs. The firm plans to open another two or three market gardens, probably around the pilot site in Yvelines, as well as offering its expertise and products to other farmers.

Prices for tunnels placed on between a hectare and two hectares of certified-organic land are likely to vary from between one and two million euros, depending on the sophistication of robots used.

Market gardening, which traditionally sees workers in hot and humid tunnels spending hours bent double over crops, is a sector of agriculture where it is hard to find labour in France.

Last year, national statistics agency Insee included market gardeners in its survey of farming and found the number of people employed in the industry had dropped from 7.1% of the working population in 1982 to just 1.5% in 2019.

The survey revealed threequarters of active farmers in 2019 were men, a proportion which has grown steadily over the last 40 years, and half of farmers were over 50 years old.

“With the average age of farmers continuing to rise, it seems obvious that we have to use machines to do many of the jobs which get harder as you get older – the crouching and bending and lifting, for example,” said Mr Roig-Ramos.

“Having machines also makes the profession more attractive for youngsters.

“They are used to high-technology in other areas of their life and can see that it will help grow vegetables too.

“But the machines will always require human intelligence to set them up and use them most efficiently,” he added.

Official figures from 2018, the latest available, show France is third in Europe, behind Spain and Italy, in production of vegetables

While the robots should help to improve production, NeoFarm’s greenhouses use minimal heating. This means that farmers must switch to winter crops such as cabbages and turnips when the weather gets colder.

“People, especially those who buy bio vegetables, are starting to realise that it makes sense to buy winter vegetables in winter, so we do not necessarily see that as a problem,” said Mr Roig-Ramos.

Truffle season starts in France with quantity down but quality up
1 December 2021
More from Work
More from Connexion
Get news, views and information from France
Join the newsletter
Subscribe to The Connexion