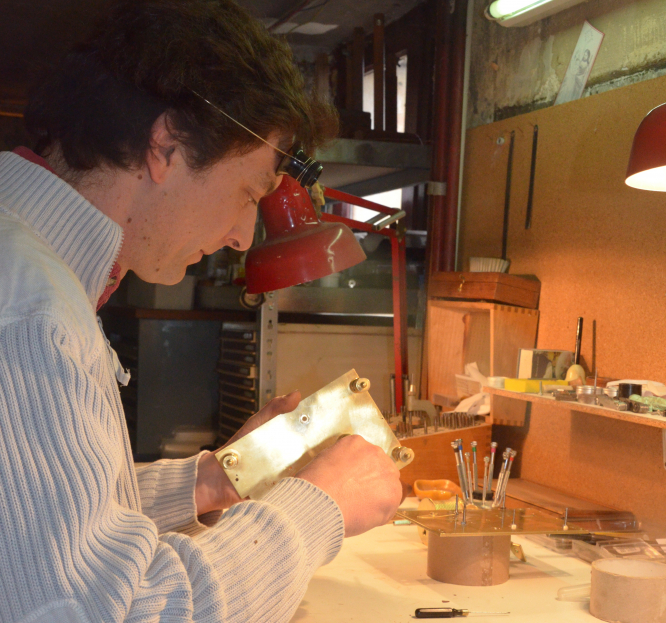 Traditional clock-makers who design, make, repair and restore analogue timepieces can be found across France, despite the modern use of
digital gadgets to tell the time.

Around 75 companies in France make such new timepieces – with almost two-thirds (65%) in Bourgogne-Franche-Comté.

There is a growing interest in older-style timepieces with mechanical parts, particularly in the luxury market.

Etienne de Saint Exupéry, a distant relative of the author of Le Petit Prince, specialises in restoring clocks, particularly those made
before 1900.

He and his father also restore and create locks to order and say they are the only two to do so in France.

His no-frills workshop is along a rutted remote country road, not far from Sarlat in the Dordogne. On the benches are beautiful clocks, repaired or waiting for attention, including a rare piece he has spent two years researching and restoring. It is in the shape of a boat, with a sailor who rows to the rhythm of the clock.

“When the owner brought it to me, it was black and tarnished and the mechanism had been replaced with an electric one,” he said.

“It is very unusual because the moving parts of the sailor are set to one side of the clock mechanism, so it took a long time to work out how the
original maker would have designed it. It is impossible to know its origins.”

He says plenty of people own old clocks which are often in a bad state but they want them restored, often for sentimental reasons. They bring them to him, he works on them – on the clockwork and on the exterior to restore it to its original glory – and then takes it to the customer’s home so he can place it and reset it if necessary.

Most of this type of work comes from private individuals in a 50km radius but he gets orders from all over France.

He charges €45/hour and a basic model will take 16 hours.

Clocks which used to have pride of place on family mantelpieces are disappearing, he said: “They are expensive to restore and as they are no longer regularly maintained, they fall quickly into disrepair.

“Also they have lost their market value. An 18th-century clock used to sell for €1,000, but that has dropped to around €500, and so people are less likely to restore them as an investment.

“I never see a grandfather clock, Comtoise, now. They have gone out of fashion and nobody wants such a big piece of furniture in smaller houses.”

A lock had arrived, sent by a woman from the north of France. “It is from an antique wardrobe and the key has split, so I will make a new one in the same style,” said Mr de Saint Exupéry. “The mechanism also needs restoring.

“The two trades of clock-making and lock-making are similar but there are fundamental differences.

“A clock has to work continuously, the lock only when you turn the key. Locks are simpler and don’t need such attention to detail on the finish.
“But they have their secrets. Because they had to be plain on the outside, locksmiths used their frustrated creativity to decorate the interior.”

“It is not all about mechanics. I recently installed an electronically-operated opening system designed to be hidden in the two doors of a bookcase. I am not working to provide secur-ity, but an original feature.”

Etienne de Saint Exupéry learned about locks from his father, a cabinetmaker who taught himself how to make and restore locks.

He studied for a BEP in electronic engineering, and then turned to clock-making and learnt his trade doing an apprenticeship in Bordeaux.

“I was lucky because I learned from an elderly man who could teach me the old techniques. This savoir-faire started to decline when the quartz watch was introduced in the 1970s.

“I chose this way because conventional qualifications focus more on modern methods. I learnt from this man and from my father.”

To be a clock and lock-maker, he says you need to have an understanding of mechanics, and a passion for understanding how things work.
You need patience and imagination to understand how the original maker would have operated.

You can study clock-making, horlogerie, starting with a CAP straight from school and follow up with a two-year Brevet des Métiers d’Art (BMA) or a one-year Certificat de Qualification Professionnelle (CQP ).

For further studies, there is a two-year Diplôme Métiers d’Art (DMA). Some of these can be done as a sandwich course.

There is no qualification for repairing old locks and creating original new ones.