How a mason climbed his way to career carved in stone 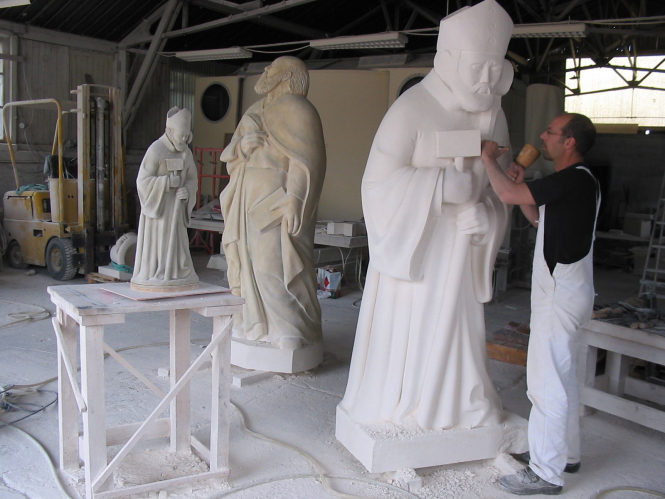 Christophe Allegri has worked with stone for 30 years after discovering his interest in architecture during student antics climbing on scaffolding, pipes and church guttering
By Jane Hanks

When he left school, he studied international commerce but soon realised it was not right for him.

However the climbing escapades with other students had brought him into contact with architecture and stonework – and led him, aged 24, to sign up for a CAP tailleur de pierre.

He found he had made the right decision: “Stone has already existed for thousands of years and so I know my work will last for several future generations.

“I am lucky to be in Burgundy because there is variety within the pierre de Bourgogne. Stone can be dry, hard or soft and I use different tools depending on the type.

“Contrary to what people might think, I find it is a material which is generous in nature, and as I coax it into the shapes I require, I feel I am having a conversation with the stone. You can compare it to wine, with each type having its own real personality.”

After his CAP, Mr Allegri studied for a BPMH diploma, during which he gained experience as an apprentice to a number of workshops all over France.

After his studies, he worked for several companies, and became responsible for a team of masons. He eventually chose to specialise in sculpture and learnt by working with a professional sculptor.

In 1998, he set up his workshop in Chailly-sur-Armançon (allegri-sculpteur.com), where he devotes his time entirely to sculpture, either his own creations or restoration.

He has worked on statuary in several cathedrals, including Sens, Nevers and Amiens and in the palace of the dukes of Burgundy.

His work can vary in size from 10cm to 2.5m tall, and from contemporary pieces to a whole range of historic styles.

He works closely with the client, making several drawings before they agree on a final design, and he says he always asks what their budget is first.

“If I am working on a figure, for example, it is always more difficult, longer and so more expensive to carve hands, so cheaper to have hands hidden within sleeves, for example.”

He said he particularly loves the challenge of producing folds in garments on a figure, creating softness out of a hard material. One of his most recent pieces is a monk he calls Pleurant, which was ordered by a client in Washington DC who wanted a memorial for his wife and found Atelier Allegri online.

He flew out to meet Christophe and they discussed all the details, so, for example, the professional sculptor could suggest creating a sense of movement by carving a foot stepping forward.

He says a cape hiding the face was a particular challenge.

He always has two projects on the go at one time, so he can step back from one and return to the other with a fresh perspective.

Christophe says he always has work, but earns just a little over minimum wage. He said: “I do not earn a great deal of money but every morning I go to my workshop with pleasure.

“One of the great joys of the job is that even after 30 years of experience, there is always something new to explore.

“I know I can do more to make my faces more expressive.”

Stonemasonry is one of the skills included in the government’s Chantiers de France programme, announced in April after the fire at Notre Dame cathedral.

It was quickly realised that there are not enough skilled carpenters, cabinetmakers, roofers, stained glass window makers, organ-builders or stonemasons and carvers, so additional training schemes are promised, to make sure Notre Dame can be repaired in the next five years and to increase numbers in general in France.

The Institut National des Métiers d’Art estimates there are about 15,000 stonemasons in France.

They work mainly on restoration projects, with a minority in the building trade or producing modern furniture or ornamental pieces.

Numbers have dwindled over the years with the introduction of modern building materials.

Onisep, the government body which gives information and career advice, says qualified stonemasons are in demand.

When they start work, stonemasons are likely to earn just above minimum wage, but they can quickly rise to a position leading a team of workers.
Their salary can rise to four times the minimum wage as they increase in seniority.

The basic qualification is a two-year CAP tailleur de pierre.

In turn, these courses can be followed by a BTMS brevet technique des métiers supér-ieurs, métiers de la pierre.