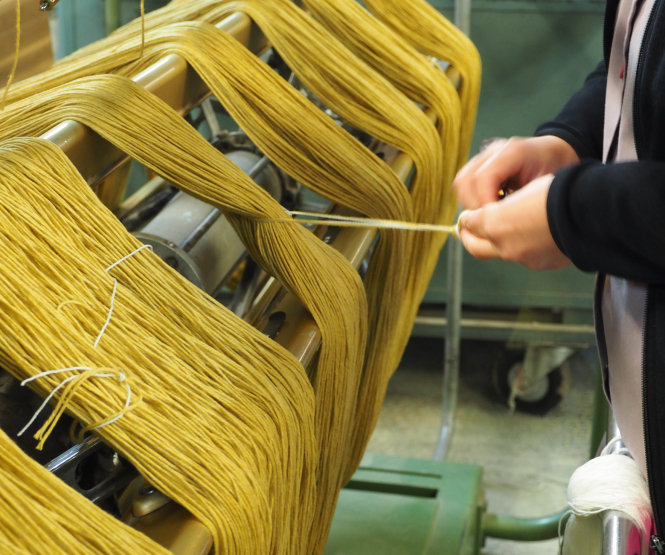 Covid-19 lockdowns boosted sales, which had been on an upward trend before the health crisis, albeit from a low base.

He said: “There is the beginning of a recognition that it is daft to import wool and knitted goods from the other side of the world when we have had – and still just have – the ability to make it in France.”

Mr de Larouzière said people in France used to knit a lot but there was a big fall-off in the 1980s, with what the few remainers in the industry call the Benetton effect.

“Suddenly Benetton, with its huge advertising campaign, made it possible to buy a pullover made in Vietnam or Thailand for 30 francs, while just buying the wool to knit one yourself cost 80,” he said.

“There was also, from successive governments, a complete disinterest in the textile industry, which went from being an important part of the French industrial make-up in the 1970s to nearly nothing.”

As part of the revival of Fonty, Mr de Larouzière has moved into the quality market, offering wools that are 100% wool, or 100% alpaca. He is also increasing the amount of French-sourced wool on sale. “At the moment, we source 30% of our wool from France, and I hope it will increase to 50% in two or three years,” he said.

Doing so will also mean boosting the whole wool industry in the country, which has been on its last legs.

“Farmers were finding it was hardly worth selling their wool, with some just throwing it away, and when they did sell it, it was roughly bundled to be processed on the other side of the world,” he said.

'There is now just one company in France which washes wool, and just one which then combs it before it comes to us'

As well as selling its own knitting wool under the Fonty name, the company makes some for other brands.

Sales to clothes-makers are small, mainly because there are so few of them left in France.

“There are some artisan knitters and one or two factories which have been bought out by people who are trying to keep them alive, but they are small,” he said.

“The devastation of the textile industry in France has been such that there are just about no large companies making woollen clothes.

'Companies like us now have to work to support the whole industry, from the farmers who shear their sheep onwards'

Many of the machines used at the filature are more than 50 years old, but still have a lot of life in them, though learning how to set up and use them is a skill which was nearly lost.

The business now has 26 workers in a rural region, Creuse, where jobs are scarce.

This led to it being awarded the label Entreprise du Patrimoine Vivant in 2017.

“This was important for us as it showed that our values – turning towards goods made in France, engaged with the community, respecting the environment, being eco-responsible and based on natural fibres – were something which resonated further than it just being another factory which nearly shut,” said Mr de Larouzière.

“Buying enough of our French wool to make a jumper is not cheap – 10 balls cost around €55 – but it is a quality product which can be used to knit items with all the benefits of pure wool.”