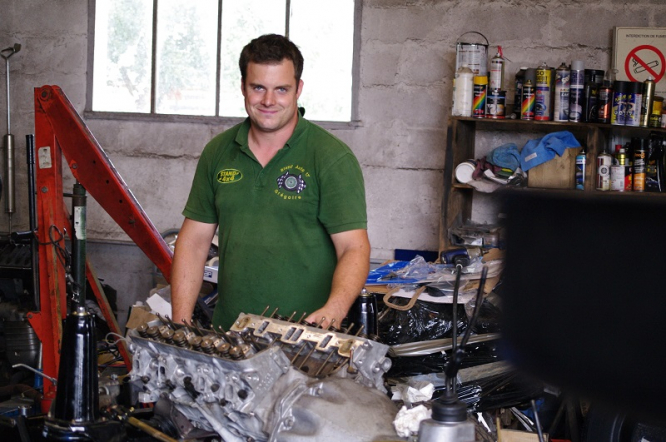 The owner, Grégoire Laroche, comes from a family of industrialists who long ago developed a passion for old British cars.

His father, Arnold Laroche, who helped set the business up, shared the family passion and even bought one of the cars that his own father had imported from the UK in the 1950s.

Arnold said: “My mother was American-Swiss, with English as her mother tongue, so I grew up bilingual. We did our best to make sure that Grégoire worked on his English when he was little and it has proved to be a good thing.”

He said Grégoire started taking engines apart and talking about cars while he was still at primary school. When he got his Bac, he enrolled in a university engineering course but, after passing his first year, decided he did not want to study further.

“Through my friends in old-car clubs, I was able to get a garage in Paris specialising in Minis to take him on and he has not looked back.”

After training at the garage for three years, Grégoire moved to Manchester, where he worked in a garage specialising in Rovers.

When Arnold retired and moved back to the family’s base in the Charente, Grégoire started looking for a garage where he could work on his own. He found the ideal place at Chadeniers, near Gémozac in Charente-Maritime, where he has been in full control for the last three years.

“Around 30% to 40% of his clients are British,” said Arnold. “It is difficult to get garages in this part of France where people speak English well and can explain the technical detail some people want with their cars.”

As for Arnold, his favourite car is a left-hand drive Rover P4, originally imported by his father in 1958. “He had a right-hand drive model but it was not practical, so he had a left-hand model imported. At the time it was more expensive than a Jaguar and the import duties were horrendous. He drove it until 1972, then sold it. I was very sad to see it go.”

In the mid-1990s, Arnold saw an advertisement for the same model, also left-hand drive, in the Pyrénées-Atlantiques. He called – and found it was the same car his father had sold.

“I was tempted, but at the time I was living in Paris and it was not practical.

“Then, when we moved here, some eight years later I saw the same advert. As soon as I spoke, the owner said he recognised my voice. He had decided not to sell it earlier but was now moving and had to. But I was too late, he’d just sold it.”

A couple of days later, he called. “The buyer had arrived with a little trailer, not suitable for the weight of the car, and an axle broke as he loaded it. He was so put out, he left it. I did not waste any time and rushed down to buy it.”

After a year or two of restoration, the Rover is now in concours condition.

One of Grégoire’s projects was a full restoration of a Mini-Moke, which acted as the “gatekeeper” of the garage before being sold.

In 2018 he carried out a complete rebuild of a 1984 Range Rover for a French client and is now working on a Defender V8 rebuild.