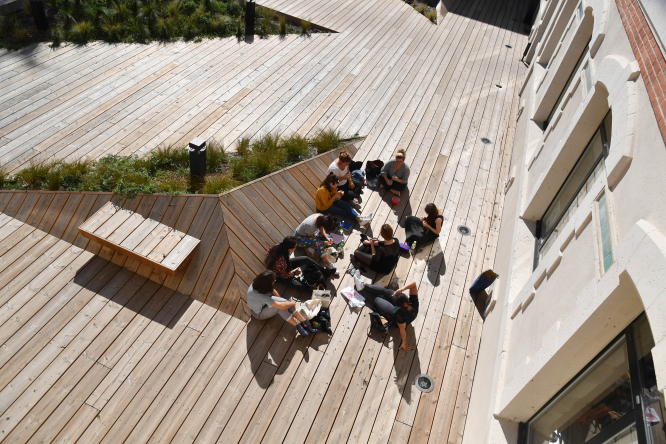 Many post-bac students choose a university near home, but many more head for the big cities to start their higher education. For those not attracted by the city lights and for families where money is tight, there is an alternative: a Campus Connecté, set up in smaller towns.

The first 13 in France opened in 2019. This year there are 31, and 100 are planned for 2022. At each campus around 10 students follow the online course of their choice on offer from universities in a range of subjects to degree or master’s level.  There are also several professional BTS courses available.

What does it entail?

Some of the work is carried out at home, but students have a timetable for hours when they must be present at the “campus”, in a building set up in a town by the local department. There is a computer for each student and a tutor who oversees their work and gives guidance and advice.

Anyone can do an online course on their own from home, but this option means the students are more likely to keep motivated as they have the tutor to help them and are not alone, as they regularly meet up with other young people.  The only cost to students is the price of signing up, set at €170 for a state university degree course and €243 for a master’s. Use of the Campus Connecté with tutor is free. A full list of Campus Connectés for 2020/21 can be found here: tinyurl.com/y6q6enne.

One of the pioneer departments is Ardèche, which started with one campus at Privas in 2019 and a second at Aubenas this year. A third is planned at Annonay in the future. The councillor responsible for higher education said this provides an alternative for people who would not otherwise be able to go on to study.

Sandrine Chareyre told Connexion: “Ardèche is a very rural department, without any universities of its own. We realised there is a far lower percentage of pupils with a baccalaureate who go on to study here than in other departments, despite good results. The two elements which put them off are being far from home in a very different city environment and price, because many families cannot afford transport and accommodation costs. We do not want to stop those who wish to move away from doing so, as this is very positive for many students, but we want to make it fair, so that those who can’t go still have the same opportunities. We are starting small, but I think this will really take off in the next few years.”

In 2019, nine students were on the campus at Privas, studying subjects such as law, education, Russian, medicine, musicology and tourism. Some have opted to continue at the Campus Connecté this year, while others have chosen to finish their courses at a physical university.

For 2020/21, six have signed on at Privas and seven at Aubenas so far. Ms Chareyre said courses were still open and she expected more to sign up, as there has been a higher than usual baccalaureate pass rate due to Covid-19, leading to greater difficulty in getting university places.

Student Léa-Lisa Petitjean, 22, has found Campus Connecté a lifesaver: “I started studying education at Grenoble, but went into depression in my second year as I found it difficult being away from home. You can easily feel lost in a big city and the huge classes are very impersonal. You might get to know two or three people but it is hard to make a lot of friends and it is difficult to make contact with the teachers. After class, I would sometimes go and ask questions, but you had the feeling that the teacher was in a hurry and didn’t want to answer. I got in touch with the Campus Connecté at Privas in January, and they accepted me straightaway, even though it was the middle of the year. This meant I didn’t have to give up my degree course, but could continue in much better circumstances for me.”

She lives about 8km from the Campus Connecté and has to be present 25 hours a week, which means she goes in for four days. All her lessons are online and written, with no direct contact with a teacher, but she said this is not an inconvenience as there was so little contact with teachers anyway.

New French language course to be offered to foreign workers

“It is far more convivial and I have made more friends here than in Grenoble. Our coach helps us a lot and organises talks on subjects useful to us, such as how to write a job application and computing skills, which means we learn things outside our own studies which helps broaden our horizons. It has been a really positive experience, and I hope to go on to be a teacher after my studies.”

Cahors, Lot, is another town where a Campus Connecté started in 2019. Bernard Delpech is the councillor in charge of further education and said it is an idea with a great deal of potential for the future. In the first year at Cahors, 10 started, but not all stayed until the end, which he said is explained by the fact that it was a late decision for many of them because they did not get a place anywhere else, so they were not motivated from the start: “As Toulouse is not far, most young people want to leave Cahors to go somewhere more exciting. But it is a real help for students who cannot go away because families cannot afford it."

"It could also provide a real opportunity to people who have given up on their studies, as many students do, and want to go back to get a qualification later on, but now have job and family commitments. Campus Connectés are an idea which is well worth continuing.”